By John Chalmers
CAHS Membership Secretary
I thought I was aware of most Canadian aviation museums and occasionally refer to the list I have made of some 30 such museums across Canada. As well, I have visited 13 of them from the British Columbia Aviation Museum in North Saanich BC on Vancouver Island to the North Atlantic Aviation Museum at Gander NL. 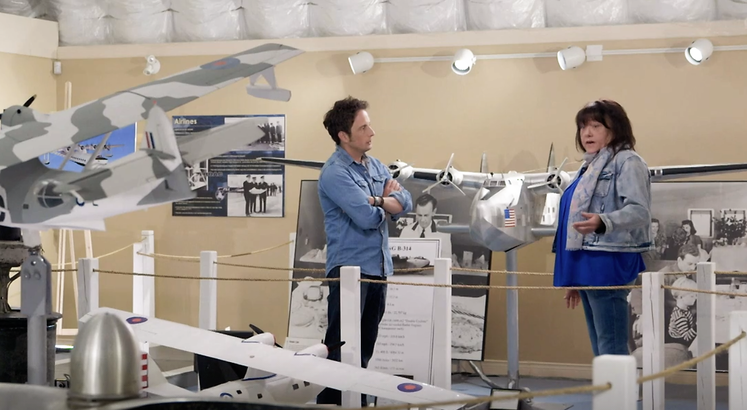 Thanks to Jonny Harris I recently learned of a Canadian aviation museum about which I was not aware – the Botwood Flying Boat Museum. I first knew about Jonny Harris in the role of Constable George Crabtree in the CBC television series, Murdoch Mysteries, a favorite TV show for my wife and me. Then Jonny turned up in another favorite CBC production, Still Standing.
The program is about Jonny’s visits and his stand-up one-man act given in visits to small towns in Canada that have faced difficulty but are “still standing.” One of those shows we saw was about Botwood, a town in his native province, Newfoundland. In that Still Standing television episode, Jonny Harris, at left above, speaks with Lisa Hemeon, manager of the Botwood Flying Boat Museum. (Image screen shot from the CBC video)
The show featured the Botwood Flying Boat Museum in the town of 3,000 at the mouth of the Exploits River towards the northeast coast of Newfoundland, 16 km north of the Trans-Canada Highway. I had to learn more! So I contacted the museum and spoke to Lisa Hemeon. Her enthusiasm was contagious about the flying boats and aviation that have played a large part in the history of the town. Like Harbour Grace, NL, where First World War fighter pilot Erroll Boyd began a non-stop flight across the Atlantic Ocean in 1930 as the first Canadian to do so, Botwood also holds a special place in Canadian aviation history.
The aviation museum is one of two museums located at the site of the former RCAF seaplane base and is operated by the Botwood Heritage Society, formed in 1989. The Botwood Heritage Centre is the other museum, housed in a former Pan American Airways terminal that was built in 1936, now a centre of local history on three floors. As the Tourism, Heritage and Special Events director for the town, Lisa Hemeon is in charge of both museums. During the summer, additional help is received from funded summer students and like many or all Canadian aviation museums, additional support is provided by dedicated volunteers.

The Botwood Heritage Center originally housed the aviation museum in the former Pan Am terminal, the green building at left. A donated house was added to expand the Center and a new building was then built in 2007 as a home for the Flying Boat Museum. (Photo supplied)

Founded as a logging town over 160 years ago, Botwood has an excellent deep harbour originally used primarily for shipping lumber and in 1911 it became an international shipping port for locally produced paper. Aviation came to the town in the 1920s with a company set up to provide air mail service and aerial photography. Later in the 1920s, the port was used for shipping minerals as well as lumber. In 1933 Charles and Anne Lindbergh landed their seaplane at Botwood for refuelling. Their experience led to recommending to the American and British governments and Pan American Airlines that Botwood would serve well as a stop prior to leaving on trans-Atlantic flights.
By 1939 Botwood had become a refuelling base for Boeing 314 Clipper flying boats en route from New York, then continuing non-stop to Foynes, Ireland. The huge aircraft carried a crew of 10 with 74 passengers in luxury flights that included fine dining and overnight sleeping facilities. Only 12 Boeing Clippers were built and none exist today. Eight were flown by Pan Am, which also flew the Clippers non-stop across the Pacific Ocean as well as the trans-Atlantic route.

The huge Boeing 314 Clipper, first flown in 1938, was 106 feet long with a wingspan of 156 feet. It was powered by four supercharged 18-cylinder Wright R-3350 twin row Duplex Cyclone engines, used on various other airliners and for warbirds including the Hawker Sea Fury and the Boeing B29 bomber. (Photo via internet, source unknown)

Although no aircraft are housed in the Flying Boat Museum, its displays and models depict the theme of the town’s aviation history from 1920 until the end of the Second World War. Facilities also include a small theatre, story panels and two flight simulators for use by visitors to fly seaplanes and helicopters.
Among the collection and displays at the museum, the artifacts of one individual in particular are of special interest to me. Those are the First World War log books, papers and medals of Carl Frederick Falkenberg, born in Botwood in 1897. He went overseas with the army in the Canadian Expeditionary Force for the First World War and was wounded in battle at Vimy Ridge. Following recovery in England, he became a fighter pilot ace with the Royal Flying Corps, credited with shooting down 15 enemy aircraft, and was twice awarded the Distinguished Flying Cross. He was recognized for “conspicuous bravery and skill in attacking enemy aircraft.” Falkenberg was one of only nine Canadian pilots twice decorated with the DFC in the First World War.
Post-war, Falkenberg was in the short-lived Canadian Air Force, formed in 1920, then becoming the Royal Canadian Air Force in 1924. But one war was not enough for him. During the Second World War, Falkenberg served in Canada with the RCAF in various posts, rising to the rank of Wing Commander, in charge of No. 4 Initial Training School in Calgary by war’s end. (Library and Archives Canada photo). He died in my home town of Edmonton in 1980, where he is buried. Falkenberg’s headstone in a Field of Honour at Beechmount Cemetery identifies him as a captain with the 14th Battalion of the Canadian Expeditionary Force, his rank and unit before he became a pilot with the Royal Flying Corps. (Chalmers photo)
​
During the Second World War, Botwood was the location of an RCAF base from which aircraft patrolled the east coast of the Atlantic. As well, Canadian Army personnel based at Botwood were charged with protection of military facilities that had been installed there. Following the war, the base was dismantled. For more info about that, click here.

For the past few years I have been wanting to make another trip to Newfoundland. to see the historic airfield at Harbour Grace. Now the Botwood Flying Boat Museum is high on my list, giving me a second reason to return to Newfoundland and Labrador. To learn more about the museum, click here and explore the town and the museum via the internet. History is richly preserved in Botwood, not only in two museums, but in 13 splendid murals in town as a result of the work of the Botwood Mural Arts Society.

Subjects of the murals range from indigenous Beothuck people to the town’s heydays of aviation to life in Botwood today. See more when you click here. To read a very informative article by Lisa Hemeon about Botwood’s aviation history that appeared in the February issue of PX, the magazine of the Retired Airline Pilots of Canada, click here. 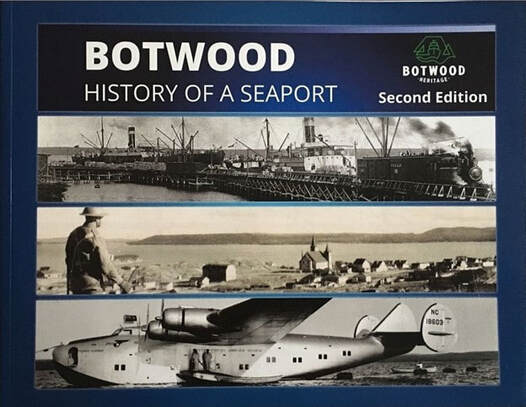 The story of Botwood is told in a 230-page book produced by the town’s Heritage Society. Sales of it are the museum’s only source of revenue this year. Botwood – History of a Seaport can be ordered for $25 plus postage, if mailed. To get your copy and support the museum, contact botwoodheritage@hotmail.com 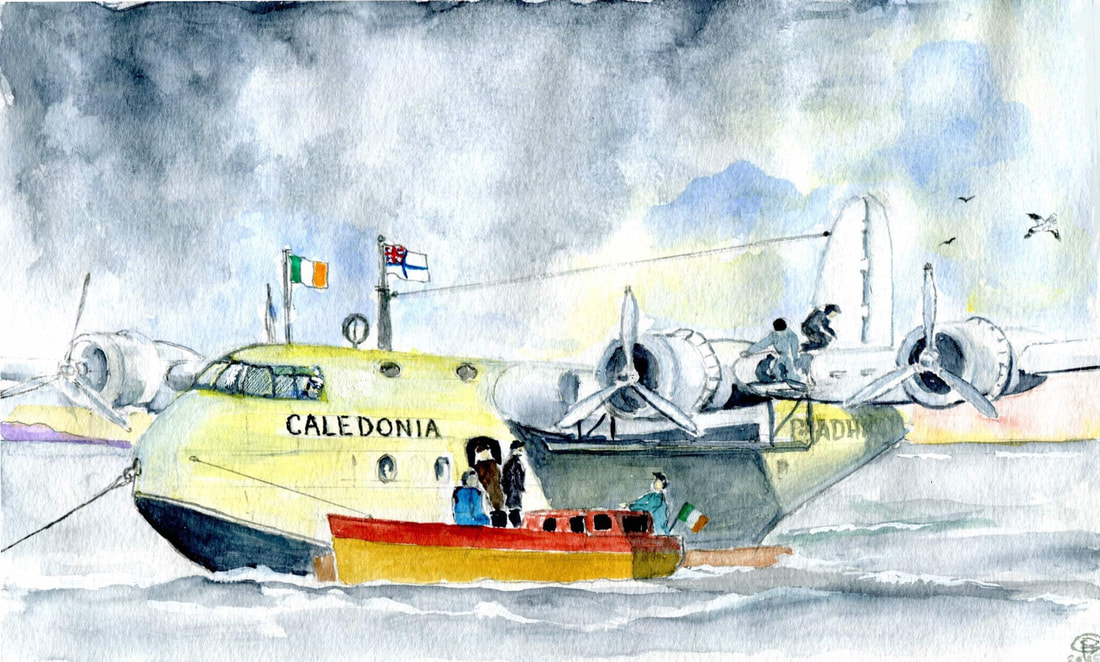 This painting by CAHS member, Paddy Gardiner, shows the Short Empire Caledonia flying boat preparing to depart from Foynes, Ireland to Botwood in a transatlantic flight of July 5, 1937, for refueling before continuing on to Montreal and New York. Built by Short Brothers, the Empires were designed, as their name implies, to serve the outposts of the British Empire - Africa, India and Australia. With a length of 88 feet and a wingspan of 114 feet, the Empire carried 24 passengers and a crew of five. Caledonia, shown here, can be seen in flight in historic 1937 film footage on YouTube when you click here.
Click Here to return to the articles page.