The First Flight to Shetland

Report and Photos by Simon Gunn
By 1918 all shipping was in danger from submarines and one British strategy was to patrol the southern coasts of Britain and the North Sea with seaplanes and flying boats. As Britain has always been reliant on trade with other European countries, there were large convoys which crossed the northern part of the North Sea to Norway and down towards the Baltic. With the help of the USA, a 250-mile string of anti-submarine mines, known as the Northern Barrage, was erected across the North Sea from Orkney to the coast of Norway. In case any German submarines were still able to pass north of this, there were regular air patrols from RAF Houton on Orkney and, in the final months of the war, from RAF Catfirth in Shetland.
​
The largest British flying boat was called the Porte Boat or Porte “Baby” and was in service with the Royal Naval Air Service from 1916. Eleven of these were built for patrolling the North Sea but were found to be rather cumbersome and unable to avoid attacks from German aircraft. However, there were two of these aircraft based at RAF Killingholme on the east coast of England and it was thought that they might be used for patrol work round Orkney and Shetland, where attacks from enemy fighters were thought to be unlikely. At the end of May 1918, propelled by three Rolls Royce Eagle VIII engines, Porte Baby 9807 was lowered down the slipway at Killingholme, taxied across the Humber estuary and took off to make its way up the east coast of Britain with Captain Arnold B Massey of Toronto as pilot. The other crew members are not known, but he had a co-pilot, a wireless operator and an American engineer. RAF Killingholme had been handed over to the USA in April and one of their engineers was selected for this flight. The weather was calm and Captain Massey and his crew spent the night at Dundee, on Scotland’s east coast.
Making their way north the next day, they ran into stormy weather crossing the Moray Firth, the servo motor which eased the control of the rudder, elevators and ailerons had ceased to work and the Porte was very difficult to steer. According to Massey’s account, his co-pilot panicked and was replaced by the engineer. The weather was poor all the way to RAF Houton in Orkney, on the north coast of Scapa Flow, the large, nearly enclosed bay in which Britain’s Grand Fleet was based for the duration of the war. Massey and his crew stayed at RAF Houton for just over a week until the 8th of June, which was calm, so it was decided to complete the journey to Shetland. They had a flight of about two hours and alighted on Wadbister Voe, a large bay on the seaward side of Cat Firth, and motored towards the new airbase.

Lieutenant Cyril Jowsey was based at RAF Houton and was used for photographic work on occasion. He took the magnificent photo of the Porte “Baby” flying boat after it had been put on its trolly and hauled up to the top of the slipway, I think it highly likely that he was on that first flight to Shetland to record the event. I am able to identify several of the officers: Captain Arnold Massey is standing on the right and Captain Hugh Wilson (of Quebec) is standing next to him. I think he must have come up as co-pilot from Houton, replacing the previous one. Sitting behind them on the aeroplane’s fuselage is the commanding officer Lt Col Charles Finch Noyes and I think the man in the pale overall in front of the centre engine must be the US engineer. It seems that either the photographer or, more likely Finch Noyes, encouraged plenty of the men to adorn the aeroplane to celebrate the first flight to Shetland.
​
There is another item in this photo which is a bit unexpected; a rowing dinghy is hanging below the lower starboard wing. I suspect that while the flying boat was motoring towards the base, Lt Massey approach a buoy and moored to it, while the dinghy was rowed out from the base with a long length of rope to attach to the aeroplane’s bow. I think the dinghy’s crew were invited to board the aeroplane and had their boat suspended from the bomb rack under the wing.
Readers seeing this picture may be surprised by the variety of uniforms. On the 1st April 1918, just over two months before this flight, the Royal Naval Air Service and the Royal Flying Corps amalgamated to become the Royal Air Force. The former RNAS men were allowed to continue using their old uniforms for a while: the officers with brass buttons, including Massey and Wilson are in their old uniform, but the other officers are in their new RAF uniforms, which were khaki and similar to those worn by the Army. The RAF uniform was changed to blue/grey about a year after this photo was taken. 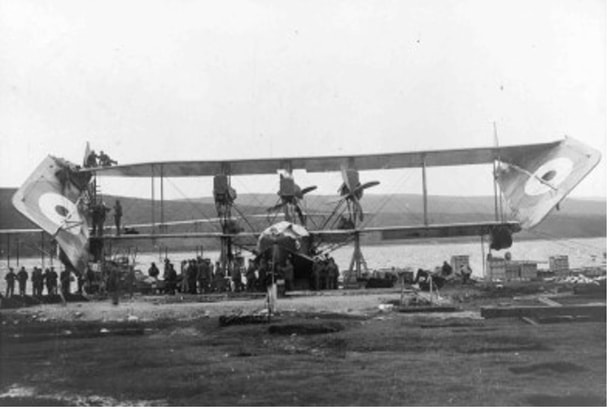 Port Baby with damage
During the following weeks, Lt Massey went to a local photographer’s studio to be recorded as the first pilot to fly to Shetland, the stormy weather returned and the Porte Baby 9807, which was secured in the open, had its top wings severely damaged. These were never replaced or repaired and the aeroplane was scrapped some months after. However, another Porte Baby arrived at Catfirth, no. 9810, flown by another Canadian pilot, Captain George Ritchie Hodgson. His arrival went down in Shetland history, I am afraid for the wrong reason. All these flying boats had wireless aerials which hung below the aircraft while in flight but were meant to be wound up back into the hull before landing. This aerial hadn’t been wound up and as a result a house in Lerwick had a chimney pot knocked off by the dangling aerial.

Arnold B Massey recorded 17 anti-submarine patrols during his time in Shetland. His next, and last posting was to the Isle of Grain, east of London and on the Thames estuary, where he was employed as a test pilot. For this he was awarded the Air Force Cross and had it presented to him by the Prince of Wales in Toronto in 1919. I was fortunate to be able to correspond with him in the 1970s and the photos and facts he sent me started a line of enquiry that has fascinated me for years.
Simon Gunn
Ross-shire, Scotland
If you would like to read the full story, Simon's book RAF Catfirth 1918, can be ordered from Bassman Books, by clicking here.
Click Here to return to the articles page.