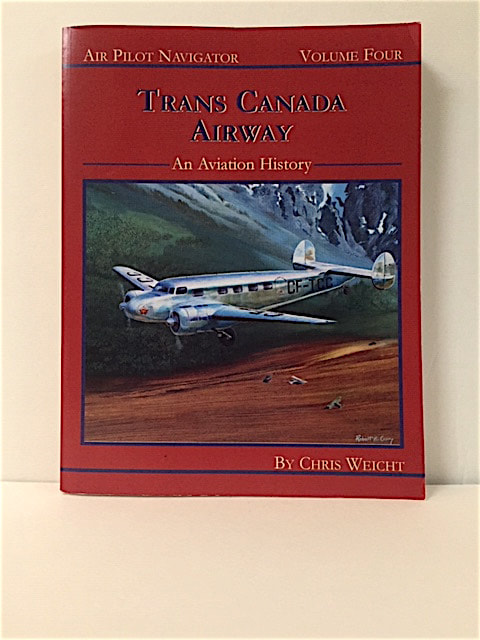 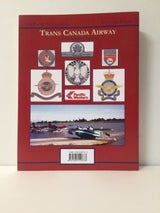 Trans Canada Airway is the fourth volume in Chris Weicht's Air Pilot Navigator series about narratives on aviation in western Canada. Illustrated with rare photographs, this ca.375 page book has a forward by retired Air Canada Captain William L. Marr. The CAHS is also able to offer this book via our e-shop at a flat rate of $50 + $20 shipping in Canada.

Shipped directly from the publisher after your order is placed here.

Add to Cart
Preface to Trans Canada Airway - Lethbridge to Vancouver, by Chris Weicht
The Canadian Air Board had originally conceived a Trans Canada Airway in 1920 as a development of the trans-Canada-flight from coast to coast which was successfully completed in that year.

The infrastructure of airfields and navigation aids necessary were non-existent at that time and it would be during the later 1920’s that an air mail route to the coast from Alberta would be seriously considered to connect with the Prairie Air mail established in 1928.

In 1928 under the direction of John A, Wilson Controller of Civil Aviation Department of National Defence, a decision was made to start a survey of possible routes and sites for the construction of intermediate airfields for the British Columbia section of the proposed Trans Canada Airway.

In 1930 Dan Mc Lean the Inspector of Western Airways for the Civil Aviation Branch of the Department of National Defence was instructed by J A. Wilson to carry out the planning and selection for the airfield sites between Lethbridge and Vancouver.

On October 8, 1932 Major General A. G. L Mc Naughton at the urging of John A.Wilson proposed to Prime Minister Bennett the authorization for the employment of unemployed men for the construction of airfields on the Trans Canada Airway under the umbrella of the Unemployment Relief Scheme. The project was immediately approved and implemented, a workforce of over 2000 men then began to clear and construct intermediate or emergency airfields every 30 to 50 miles across the route. New airfields were completed at Coleman and Cowley in Alberta and Fernie, Yahk, Kitchener, Salmo, Crescent Valley, Midway, Rock Creek, Carmi, Oliver, Keremeos, Princeton, Hope, and Langley in British Columbia.

By mid 1936 the Department of Transport had been created and assumed control of civil aviation from the Directorate of Civil Aviation, Department of National Defence. As the intermediate airfields were now largely complete the Relief projects were phased out.

The Department of Transport conceived a low frequency, four-course radio-range airway (Green 1) between Lethbridge and Vancouver in 1936, and installed the first station in 1937 at Vancouver (VR). The others followed quickly thereafter at Princeton (QP), Grand Forks (YF), Cranbrook (XC), Cowley (YM), and Lethbridge (QL). It was soon found that better airway coverage and aircraft reception would be afforded if the section between Cranbrook and Princeton were in a straight line and the range stations located at a higher elevation. The Department of Transport installed two new stations at Crescent Valley (QS) and Carmi (XO). This work was completed and calibrated by January 1939. The Grand Forks (YF) Station was then deactivated and relocated to service the Okanagan Valley, providing a radio range instrument approach at Penticton.

Leigh drove to Princeton with airways inspector J.R. "Doc" Robertson and radio engineer A.K. Bayley, and soon located a site for the range one half a mile east of the present airfield. After Tudhope and Hunter arrived in CF-CCT the group moved on to a site three miles south of Oliver, which was planned as the next range site but was later cancelled. The group then moved to Grand Forks and selected a site for the range at the area known locally as Carson, and by September 2 had moved on to the next location. A site was selected at Creston, which was also later cancelled. After locating another site at Cranbrook the group then left for Alberta where sites were placed at Cowley and Lethbridge.

The Prairie Air Mail had largely been operated By James Richardson’s Canadian Airways and was supported by contracts from the Canadian Post Office Department, however with the onset of the depression funding for these contracts were severely curtailed eventually resulting in a cancellation of the service.

Canadian Airways had made significant expenditures in anticipation of its becoming Canada’s national air carrier. However due to political infighting this did not occur and the Canadian Government formed Trans Canada Airlines on April 10, 1937 as a wholly owned subsidiary of the Canadian National Railway.

The construction of a chain of airfields to compliment the existing airfields of Lethbridge, Cranbrook, Creston, Trail, Grand Forks, Chilliwack and Vancouver, together with a system of Radio Range navigational aids across southern British Columbia could not have been timelier. With the advent of war in 1939 came a significant increase in the amount of air traffic across the Rocky Mountains from Vancouver to Lethbridge.

During and after WWII aircraft became more and more reliable and had far greater range. This sophistication saw the necessity of the intermediate airfields diminish. Many of these fields saw very little use and the economics of there maintenance became questionable. The D.O.T. operated airfields at Coleman, Fernie, Kimberley, Yahk, Kitchener, Salmo, Crescent Valley, Rock Creek, Carmi and Keremeos were abandoned. But even seventy years after they were constructed by the Unemployment Relief Scheme work gangs, if you know where to look you can still find evidence of there existence. To those interested, this book will show you where to look.
View other frontmatter pages of this book via these links: