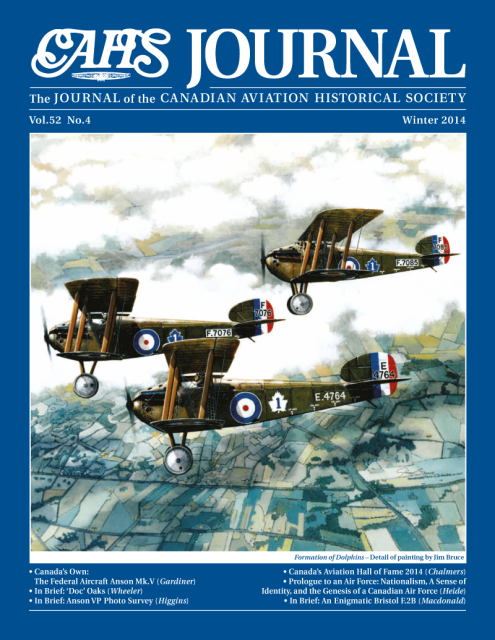 In Brief: Harold A. ‘Doc’ Oaks

A pioneer aviator, a unique aeroplane, a story of and from some time ago. By Bill Wheeler

An account of the Canadian design and manufacturing effort to produce an all new version of the Avro Anso to meet the British Commonwealth Air Training Plan demand for a twin-engined trainer. By Paddy Gardiner

A very brief summary of the lesser known Anson Mk. V variant, the Mk.VP, as converted for photo-survey use by the RCAF. By Terry Higgins

CAHF Historian John Chalmers presents his annual review of the ceremony and inductees at this year’s event.

Prologue to an Air Force: Nationalism, a Sense of Identity, and the Genesis of a Canadian Air Force, 1914-1918

Based on a paper originally prepared for a Humber School of Liberal Arts and Sciences conference, Dr. Rachel Lea Heide details the welling up of patriotic will on many levels that set the seeds for a national air force.

Ian Macdonald shares an interesting find and what he’s discovered so far, but seeks more answers related to this rare photo of an early ‘Brisfit’ with a Canadian connection.