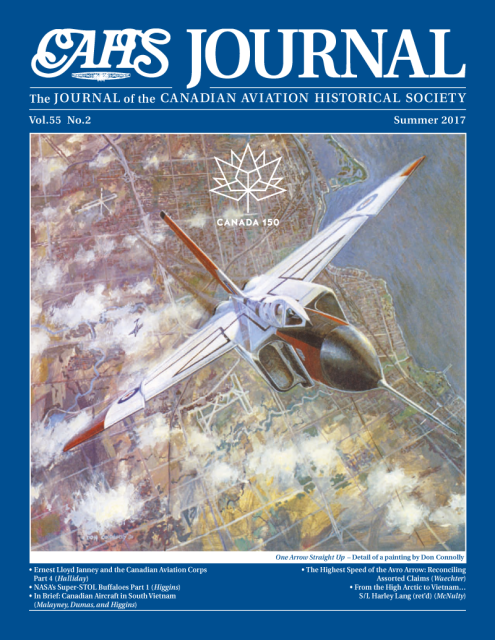 Janney continues to get himself in trouble even when out of uniform and now on civvy street. In this instalment author Hugh Halliday tracks our unreluctant hero through a scheme or two involving surplus military aircraft and great (mis)adventure.

A historical appreciation of the Canadian-content contributions made to NASA’s powered-lift research technology efforts in the 1960s and ‘70s. Part 1 is about the developments leading up to the Augmented Wing Jet STOL Research Aircraft. By Terry Higgins.

A collection of rare photographs from the personal albums of Norman Malaney and Richard Dumas populate this photo essay (which continues on the back cover), with notes on the history of some of the individual aircraft compiled by Terry Higgins.

The Highest Speed of the Avro Arrow: Reconciling Assorted Claims

From the High Arctic to Vietnam: Reflections of Squadron Leader Harley Lang (Retired)

Based on personal interviews, veteran journalist Gord McNulty relays more than six decades of recollections from the widely varied career of a very experienced aviator.