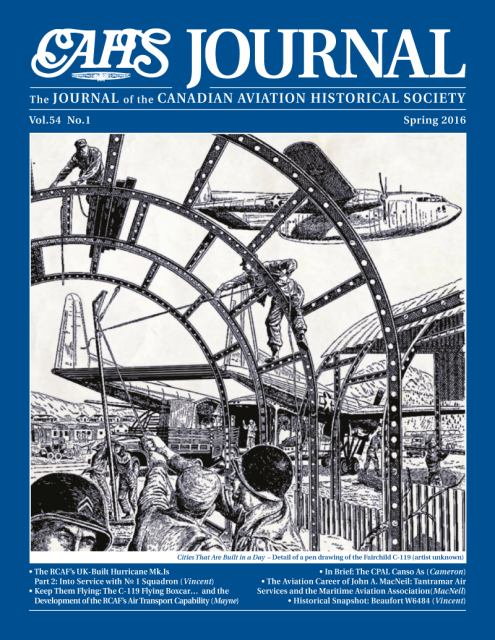 The RCAF’s UK-Built Hurricane Mk.Is Part 2: Into Service with No.1 (Fighter) Squadron

Carl Vincent resumes his account of the UK-built Hurricanes in RCAF service.

Keep Them Flying: The C-119 Flying Boxcar, its Replacement and the Development of the RCAF’s Air Transport Capability

A penetrating look behind the scenes as postwar Air Force brass copes with the acquisition of modern aircraft types to fulfill a very specifically RCAF heavy transport role. By Dr. Richard Mayne.

In Brief: The CPAL Canso As – Highlighting CF-CRV

The Aviation Career of John A. MacNeil: Tantramar Air Services and the Maritime Aviation Association

Son Don MacNeil provides an account of his father’s four decades in aviation under both civilian and military hats.

Elizabeth Vincent provides a brief glimpse at the RCAF’s very brief attempt to find a harassing Japanese submarine off of Canada’s west coast.