Many of you do not know about this flag, actually a pennant, which I discovered last year and, after many telephone calls and some luck, found the seventy-one year old original in Albany, NY.

When ordered to War in late 1939, the Squadron first deployed to Rockcliffe (Ottawa, ON) for conversion to the Lysander aircraft.  The new CO at that time was S/L W.D. Van Vliet.  By early February 1940, the Squadron was ready to depart to the UK, first by rail to Halifax and then by steamship across the Atlantic.  The squadron was the first RCAF unit to go overseas and they were given an official send-off, in Ottawa, by the Prime Minister and the Min. of  National Defence.

At that time, S/L Van Vliet was presented with the one-of-a-kind 110 Squadron pennant.  A 12-page Canadian National Geographic article with 20 images was published in June 1940 about the activities of the Squadron from Rockcliffe to the arrival in the UK.  On the front page was an image of the pennant.

I discovered this article some time ago and finally decided to either make a replica or find the original.  We were able to get a good B&W from the War Museum in Ottawa and this was scanned into an accurate drawing.  In January, I found the original pennant with the Van Vliet family in Albany, NY.  This past Thursday, I drove to Albany (and back - almost 1,500 kms) and returned the pennant to Toronto.  I departed at 0600 and was home just before midnight.

It was an exciting moment when I unfolded this historic item at the Van Vliet home.  I was also able to get a copy of G/C Van Vliet’s six logbooks and several photos, for the era that he was CO, are being gathered by the family.  Unfortunately, G/C Van Vliet died from a heart attack at age 39 in 1942 while serving as the Air Officer Commanding the Western Region of Canada.  He is buried at Beechwood Cemetery in Ottawa. 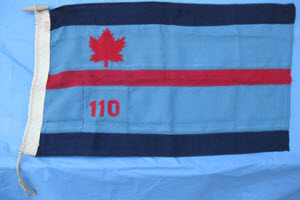 The pennant measures 20 inches x 30 inches (50 X 60 cms).  It is identical on both sides and is made from a wool-weave type of material.  It is see-thru when held up to the light.  There are about a dozen thin spots or very small holes but, otherwise, it is in pristine condition with no apparent fading.
The pennant is now stored in an archival-quality full-sized and clear plastic envelope.  This, in turn, is kept in a full-sized and flat brief-case shaped wooden carrying case with a handle.
Next, I will have the pennant professionally evaluated for possible restoration (or not) and mounting.  I will be negotiating to have the pennant kept at the National Air Force Museum in Trenton and negotiating with the family for permanent retention in Canada (this is partially complete).  Beyond the donation from the Air Force Assoc., there will be a fund raiser to complete the project - estimated at $1,300.  There will also be a few full-sized replicas made; for the family and the squadron
I would like to thank the Van Vliet family in Albany, NY for their kindness and trust: Ilene Hoerning and Claire Van Vliet (daughters), Audrey Thomas (granddaughter) and Walt Hoerning (grandson).  I would also like to thank Peggy Van Vliet of Ottawa and Locklan (Rocky) Van Vliet of Carrying Place, ON for their great assistance in finding the family. And, Dr. Georgiana Stanciu, Curator at the National Air Force Museum in Trenton, ON for their interest.  Thanks to Eric Fernberg of the Canadian War Museum in Ottawa and Peter Elliot of the RAF Museum in Hendon for their valuable comments to the project.

Thanks to The Air Force Assoc. Trust for their willingness to partially fund this project.  Thanks to Harold E. Wright who has provided further research and documentation from the National Archives in Ottawa. And lastly, thanks to Ron Wylie who autographed and donated a 400 Squadron history book to the Van Vliet family.
Back to the Archived Articles page <