By Gord McNulty
CAHS Vice President
Homebuilt aviation in Canada lost one of its most dedicated proponents when Russell Guy (Russ) Norman, CAHS No. 608, died in Hamilton on Dec. 19. He was 92.

The remarkable career of Russ began with his first ride as an air cadet in a Piper J-3 Cub at the old Hamilton Municipal Airport in 1943. Russ steadily expanded his horizons in aviation and continued flying into his later years. Remaining as keen about airplanes as ever, Russ enjoyed his “flying family” at Gilbert Custom Aircraft in Brantford and the companionship of the Tiger Boys vintage aircraft restorers at Guelph.

Russ flew 40 types of aircraft and owned nine, including four he built himself. His career was covered in a feature that I wrote in the CAHS Journal, Vol. 41, No. 1, Spring 2003.

Making his first solo flight in 1947, also in a J-3, he checked out a variety of light aircraft and took up glider flying. He joined Avro Canada in 1951, working in the template department. A master craftsman, Russ really became involved in building and flying homebuilt aircraft. He was the founding president of Experimental Aircraft Association Chapter 65 in Hamilton and a Chapter executive for 30 years.

After the CF-105 Arrow was cancelled, Russ found employment at the Hamilton Board of Education. He worked there for 25 years and became a supervising foreman. He completed his first homebuilt, EAA Biplane CF-RFG dubbed “CF-106,” in partnership with fellow Avro employee George Ellis, in the early 1960s.

Russ made the cover of the EAA Sport Aviation magazine, May 1965 issue. He was flying the Biplane in a photo taken by my father Jack, a close friend of Russ for many years, who took the picture from a Fairchild/Fleet Cornell flown by Merrill McBride. It was the first time a Canadian-registered aircraft appeared on the cover of Sport Aviation.

​
Russ proceeded to build a Corben Junior Ace with his son Vaughan. He taught my brother, Jim, to fly a J-3. As Jim recalled, “Russ had an amazing knowledge of aircraft construction.” Jim has many happy memories of time spent with Russ and Vaughan helping build the Junior Ace and other projects, and travelling to Oshkosh for the famous EAA convention fly-in.

Vaughan built a Steen Skybolt and Russ checked him out on it. Russ then completed a Bushby Mustang II all-metal custom homebuilt, which he enjoyed flying for 20 years until he sold it last year. 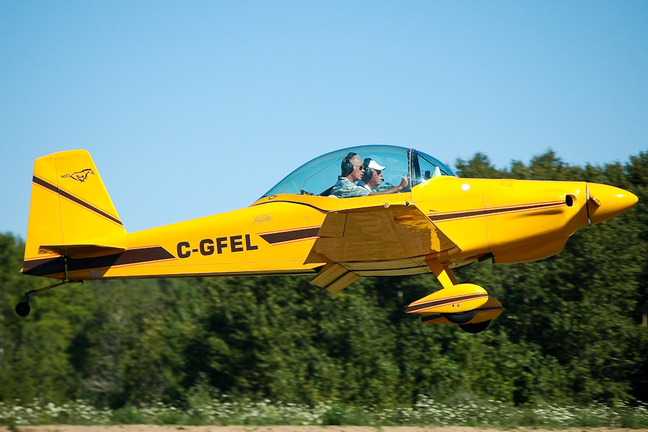 Russ and son, Vaughan, landing Russ's Bushby Mustang II at the Gathering of the Classics fly-in at Edenvale, Ont
In his only regret, Russ wasn’t able to complete a rare Dart Model G antique, CF-SUS, that he acquired in 2009 for restoration at Gilbert Custom Aircraft. I wrote a feature on this fascinating project in the CAHS Journal, Vol. 53, No. 1, Spring 2015. This nifty, attractive aircraft has a colourful history. Russ planned to re-engine the Dart with a 150 hp Lycoming and paint it in a smart yellow and black scheme. As of now, it remains on the “to do” list in Darryl Gilbert’s hangar at Brantford.

Russ was an enthusiastic, positive person. A longtime member of the Canadian Owners and Pilots Association as well as the CAHS and EAA, he loved to share good stories and memories about airplanes with friends around a coffee table at his home on Hamilton Mountain every Monday night for many years. His garage, complete with an extension, was a mini-assembly plant over the years.

Russ began attending the annual EAA convention fly-in in 1958, when it was held in Milwaukee. He attended every year as it relocated to Rockford, Illinois in 1959 and then moved to its permanent home in Oshkosh, WI in 1970. Russ was also impressed after a visit to the Antique Airplane Association fly-in convention at Blakesburg, Iowa.

I wrote a full-page feature article on his flying adventures, published in The Hamilton Spectator on May 28, 2003, under the headline “A lofty preoccupation.”

As I quoted Russ at the time:
“There is a great sense of accomplishment and satisfaction in the building of your own airplane. You’ve done something with your hands and you’ve learned in the process. It’s a real thrill, believe me, to make your first flight in an aircraft that you have built.”
​
Russ was predeceased by his wife, Gloria, in 2013. He leaves his daughter, Dianne; Vaughan; two grandchildren and six great grandchildren. Russ will be missed and we send our condolences to his family.