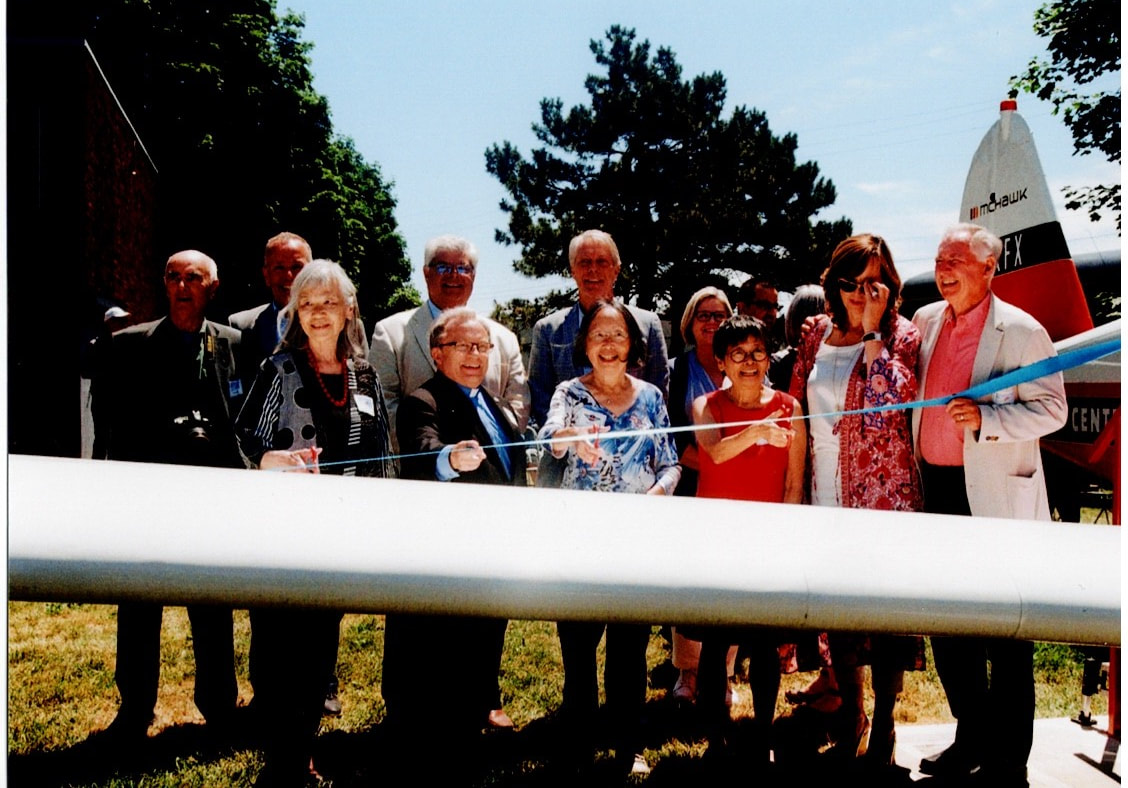 Cutting the ribbon as the Piper Apache is unveiled. Larry Milberry is on the left entrepreneur Ron Foxcroft is on the right.

A throng of about 200 people celebrated the official unveiling of a restored 1956 Piper Apache at the Eva Rothwell Centre in inner-city Hamilton on July 9.
The ceremony culminated a remarkable odyssey for an aircraft that originally flew into Canada for service with Central Airways, owned by Robert and Tommy Wong, at the Toronto Island Airport.  CF-KFX flew for 33 years with Central until it went to a new owner.

Found in a field by Don MacVicar on Highway #6 in November 2018.
The nifty twin-engined aircraft sat derelict in a farm field off Highway 6 in suburban Flamborough for decades. It was discovered by Rev. Don MacVicar, founding director of the Eva Rothwell Centre, on a routine drive in November 2018. 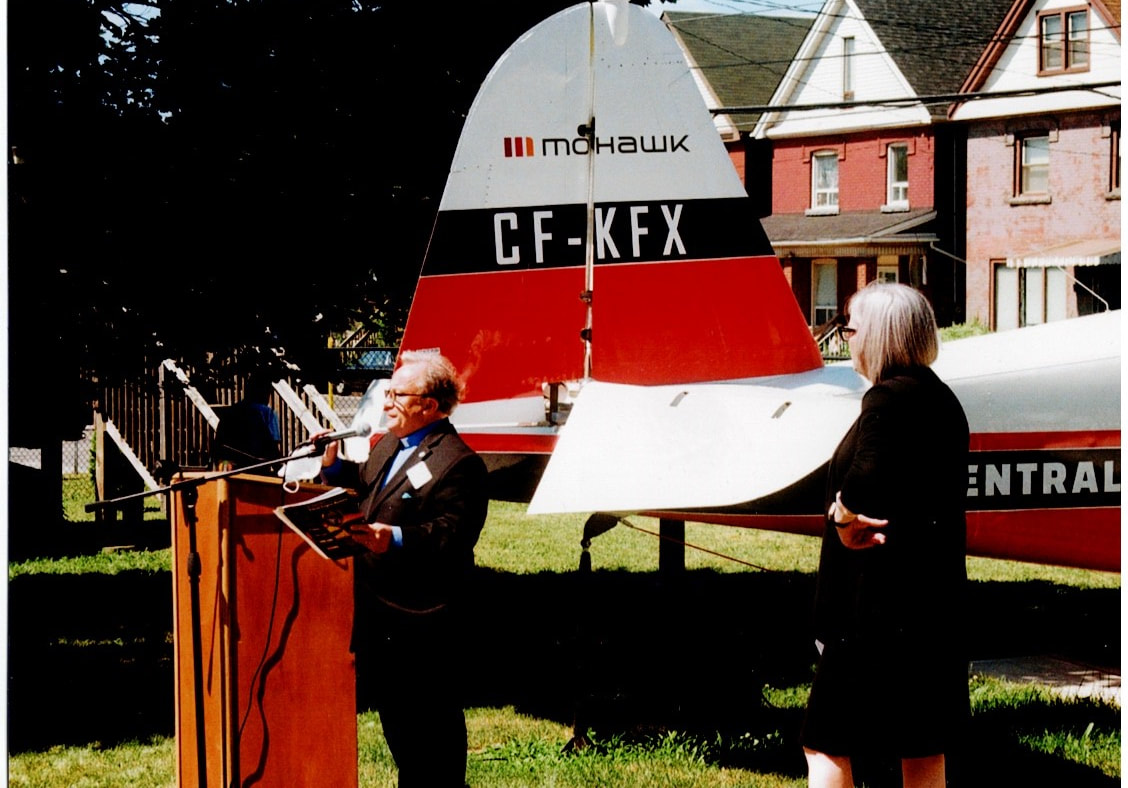 Rev. Don MacVicar of the Eva Rothwell Centre outlines the restoration of Piper Apache CF-KFX on 9 July 2022.
The Centre is a community beacon for neighbourhood youngsters. Rev. MacVicar was quick to see the potential value of a kid-friendly airplane as a learning opportunity for career aspirations, along with a restored 1954 CNR passenger coach that serves a place for literacy instruction at the Centre.

The Apache was taken on a trailer to the Mohawk College Stoney Creek campus, where students in the aircraft maintenance program restored it with the help of KF Aerospace at Hamilton Airport over four years. Many volunteer hours were involved in the project, valued at $100,000 in cash and kind. 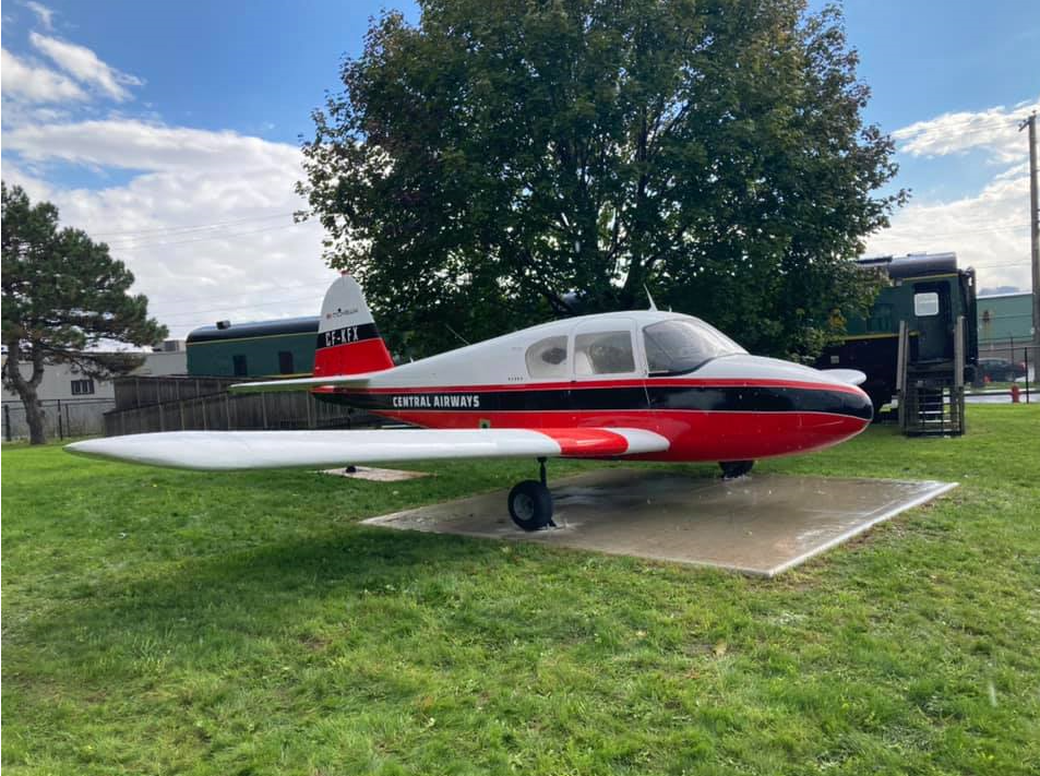 New home of the 1956 Piper Apache right next to the Larry Paikin Literacy Express, the 1954 CN Passenger train. The airplane has a flight simulator that the Jr Air Cadet members learn on.
The Apache looks resplendent in the attractive Central Airways livery.  It includes a fully-restored cockpit cabin and a flight simulator. The two Lycoming engines were not installed on account of potential safety issues with the kids. 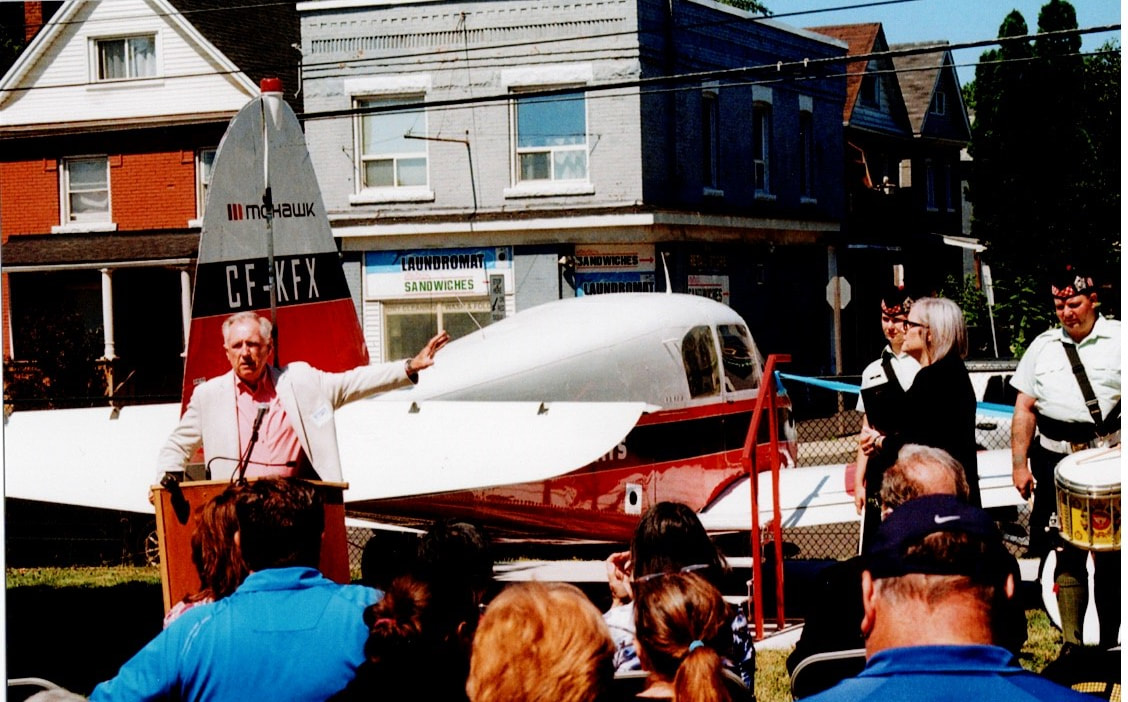 Entrepreneur Ron Foxcroft, inventor of the Fox 40 whistle, commended the work of Rev. Don MacVicar in the Apache restoration.
Members of the Wong family, including a niece and two of Robert Wong’s daughters who learned to fly under their father, attended the special event. They were joined by alumni of Central Airways who flew the aircraft, CAHS stalwart Larry Milberry, and Cam Harrod of the Guelph Tiger Boys, as well as community leaders among others.

Robert and Tommy Wong, among the pioneers of Canadian civil aviation, grew up at a time of widespread discrimination and prejudice against citizens of Chinese heritage.  After learning to fly in a homebuilt plane in the 1930s, they were initially rejected by the RCAF during the Second World War because they were Chinese Canadians.  But they went on to become flyers and formed Central Airways, the largest flying school in Canada.

CF-KFX made an impressive debut as one of the very first Apaches flown into Canada in 1956. Joining a fleet of 15 aircraft --- Cessnas, Pipers, Beechcraft, Fleet Canucks and Aeroncas --- it became an anchor trainer as the fleet grew to 26 aircraft.
The five-seater CF-KFX trained hundreds of pilots for commercial aviation.  It flew businessmen and vacationers all over Ontario and the northern U.S.A. and thrilled sightseers on flights over Niagara Falls and around Toronto. 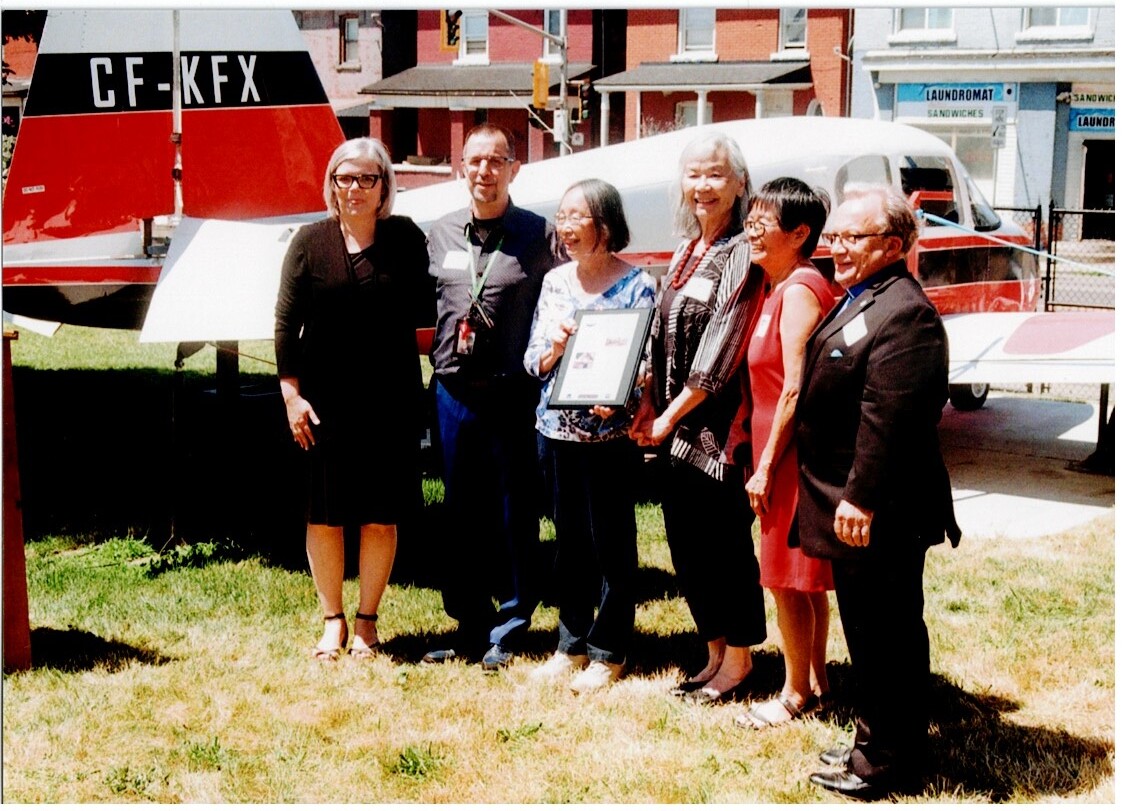 Three members of the Wong family recalled the achievements of Robert and Tommy Wong.
It was a rewarding occasion to enjoy the unveiling of an aircraft that carries a lot of history.  CF-KFX now has a new lease on life, inspiring young people who owe a debt of gratitude to the leadership of people like the Wongs and Rev. MacVicar.
Click Here to return to the articles page.