Mention the current Russian Federation, or its predecessor, The Union of Soviet Socialist Republics, and what images come to mind?  Russia, which Winston Churchill once famously characterized as "a riddle, wrapped in a mystery, inside an enigma", is renowned for its spies, espionage networks and in more recent years, misinformation campaigns and international election meddling.  What other culture could produce as a national symbol the Babushka (more correctly, the Matryoshka) Doll; a deceptive nest of wooden dolls concealed within a vividly-painted and seemingly-innocuous doll?   Against this underlying layer of intrigue, in Red Star over Canada, author Chris Weicht tells the little-known story of Canada’s involvement with Russian pioneering long-distance propaganda aviation flights from Moscow to America just prior to the Second World War.  These were trumpeted as feats demonstrating impressive Soviet aviation achievements using Soviet aircraft capable of seemingly unprecedented range and endurance.
​

A marked change from his earlier works, in Red Star over Canada Chris undertakes a detailed examination of the realities of these propaganda flights, and of the people and politics behind them.  The author of ten published aviation books, Chris is best known for his Air Navigator Series of seven volumes that meticulously documents the history of virtually all the airfields (both current and abandoned) in British Columbia, Alberta and surrounding areas.  Chris, a retired RCAF Historian, is well suited to this investigative task, given his lengthy aviation career in British Columbia, his obvious tenacity in pursuit of the truth, and his life-long interest in history.

The first Moscow-to-America flight was completed in the fall of 1929 by a Tupelov TB-1, also known as an ANT-4.  Christened Land of the Soviets, it hop-scotched its way eastward from Moscow, then up the Aleutian chain of islands and from there down the west coast of Canada and the United States to Los Angeles.  Finally, it made its way to New York City.  While a notable achievement in its own right, in 1935 Stalin, the harsh Soviet dictator, demanded more from his leading aircraft designer, Tupelov, and the overseeing Arctic governing body; the Northern Sea Route Administration (NSR).  Specifically, he wanted the Soviets to achieve the spectacular stunt of a direct flight from Moscow, over the Pole, to San Francisco, California.  Such an historic flight would rank the Soviets on par with some of the most advanced aviation achievements of the day and demonstrate the impressive capabilities of the emerging aviation sector in the Soviet Union.

This edict put the NSR and Tupelov in a difficult position.  It was never a good career move to refuse a direct request from the ruthless Stalin.  However, the only long-range aircraft available, the ANT-25, was incapable of achieving this requirement.  And so the plot thickens.  The author theorizes that in desperation the NSR and Tupolev reverted to a time-honoured Soviet tradition; deception.

The mandated Moscow-to-California flight materialized on 19 June 1937 when an ANT-25 christened Stalin’s Route appeared in northern Canadian skies en-route to San Francisco.  A few hours later it set down at Pearson Field, Vancouver, Washington, due to a shortage of fuel.  While the flight failed to reach its intended San Francisco destination, it was touted as a major triumph of Soviet aviation.  However, sources such as the Seattle Times newspaper and Aeroplane magazine speculated that the flight had been faked.

Adding credibility to these early skeptics, Chris shows that the aircraft filmed leaving Moscow was not the same plane that arrived in North America.  Was a second ANT-25 positioned on the eastern edge of the USSR to complete the flight?  Did the aircraft transit the Pole at all?  Furthermore, en-route radio position reports from the ANT-25 were dubious at best; were NSR Arctic posts recruited to issue bogus updates?  The first Canadian radio communication received reported the fliers at 120 longitude, near Fort Smith, NWT.  Just 28 minutes later they radioed a position hundreds of miles to the west; over the Queen Charlotte Islands.  Why did they turn almost due west instead of continuing down the 120-degree longitude track first reported? Could the aircraft suddenly almost triple its speed?  As for the unprecedented range of the flight, was it possible that a secret refueling station was established on the uninhabited Goose Island, off the west coast of northern BC near Bella Bella?  Chris tackles each of these puzzling elements to the story.

Ironically, it was the oral history of members of the Heltisuk Nation of Bella Bella that in the early 1980s first put Chris onto the thread of the story.  Tribal Elders recalled stories of Russian aircraft landings on remote Goose Island during 1936-37. Drawing on previously unknown material and recently de-classified American and Canadian government files, Chris casts credible doubt on many of the technical achievements of this flight, as well as a second flight to California made a month later by another Soviet ANT-25 that ended up near San Diego.  Lengthy interviews with local residents and new documentation from a variety of sources uncover fresh evidence to further reinforce this possibility.

In the book Chris also does a deep dive into the career and ultimate demise of Sigismund Levanevsky; the pilot selected and groomed to become the ‘Russian Lindbergh’.  In 1936 Levanesky was ferrying a newly purchased Vultee V-1 aircraft from Seattle through Alaska to Russia, and spent two days on the uninhabited Goose Island, claiming he was delayed by bad weather.   Chris speculates that in reality the Soviet flyer was scouting a location for a secret Russian refueling base to be used in the forthcoming long-range flights to America.

nfortunately, the next year Levanevsky failed in the first attempt to complete the Moscow-to-California flight and he possibly declined to further participate in the ANT-25 deception. For whatever reason, Levanesvsky was abruptly shunted aside, which led to a steady fall from official grace, and a possible attempt to defect.  In August of 1937, he, along with five crewmates, vanished in an ANT-6 while attempting an Arctic flight from Moscow to Fairbanks, Alaska.  The author has further questions about the politically convenient disappearance of a recipient of a Hero of the Soviet Union award now in disfavor.

Using new sources of information, additional personalities are dragged into the narrative.  Chris specifically broaches the possibility that the American President, Franklin D Roosevelt, and the Commander of Pearson Field, Colonel George Marshall, (later the author of the post-war Marshall Plan for European recovery) were both active participants in this deception.  As such, Chris proposes that FDR ordered the establishment of a clandestine airstrip built on Goose Island, British Columbia, engaged George Marshall to oversee the task, and leaned on both the Canadian Prime Minister and his ‘Minister of Everything”, C.D. Howe, to allow this construction and suppress any hint of Russian gamesmanship in their long-range flights to America.
While in all a fascinating story full of mystery and conjecture, I have two small quibbles with the book.  First of all, the Consolidated Fleetstar Model 17 referenced in the book is actually a Consolidated Fleetster.  Secondly, I wish Chris had also devoted a chapter to the final Soviet long-distance Moscow-to-America flight.  A 1939 attempt to fly a twin-engine Illuyshin TsKB-30 christened Moskva directly from Moscow to New York unexpectedly came to grief with a forced landing in New Brunswick, Canada.  The inclusion of this Russian misadventure would complete the historical record of Canada’s involvement with the Soviet pioneering long-distance flights to America and would nicely round out the material presented about the earlier flights.

Meanwhile, two thirds of the way through the book it takes a sharp and unexpected turn by directing the narrative to the Arctic of the present day.  Here the author identifies the looming specter of Canada and Russia sharing a common northern border and warns of the risks of ignoring increasingly hostile activities in the region.  Aggressive Russian moves since the year 2000 include the build-up of their Northern Fleet, the establishment of militarized ice-floe camps near the North Pole, the 2013 placing of the Russian flag on the seabed at the North Pole, probing flights by Russian bombers over the Beaufort Sea, and the recent claiming of two-thirds of the entire Arctic territory.  Elsewhere, Chris sees the methodical Chinese purchase of Canadian business interests in the North and their stated ambition to be a ‘Near Arctic Power’ as further complicating the situation.

Overall, the book is lavishly illustrated with more than 65 photos and maps, very few of them seen before.  These images serve to illustrate the narrative and add depth to the story.  Likewise, detailed appendices document the major personalities involved and are useful references for the reader. There is even a succinct overview of Russian aviation history to enjoy.

With the wealth of factual material provided, and given the addition of speculative but informed questioning by the author, the reader can learn a great deal about Canada’s unintended involvement with these early Russian polar flights and gain new perspectives on the Soviet mindset.  This history and a deeper understanding of the Russian motivation behind the territorial maneuvering of today will help make sense of developing storylines referencing the Canadian Arctic.

In conclusion, if I were to characterize Red Star over Canada in one sentence, I would say that it echoes of Canadian involvement with Russian aviation history, (some of it likely manipulated for political purposes) but resonates with the emerging conflicts in the Arctic of today.  If you are interested in either topic, or better yet, both, I would strongly recommend this book for reading. 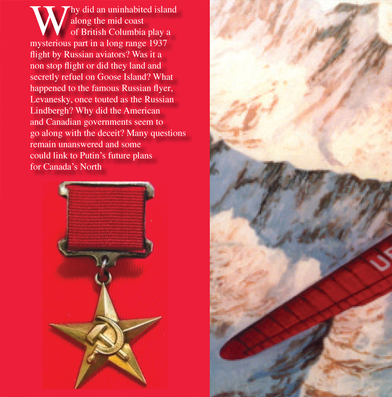 This book may be purchased directly by contacting the author via this link, or by phone at 604-885-6766.
Doug Rollins is the Librarian at the British Columbia Aviation Museum. He has researched and written a number of articles on aviation history for a variety of local magazines and publications and makes regular presentations on aspects of Canadian aviation history to local community groups.
​Return to the Aviation History Books main page <