Raymond Gran and the Tirpitz​

Report and photos by
Victoria Hetherington
Though fifteen RCAF Squadrons fought in the war, many RCAF officers were ‘orphans’ in a sense: when they arrived in Britain, they were slotted into the RAF Squadrons. Such was the case with Ray, who joined the renowned Squadron 9, an elite bomber unit manned by both Canadian and British fighters. Totalling 204 hours of airtime, Ray flew in 34 sorties, completing three against Tirpitz.

From July 1944 until September, Ray would complete six missions with W/C Bazin and Squadron 9, culminating in the first mission against Tirpitz in Operation PARAVANE on September 15, 1944. They faced grim conditions: unlike other planes at the time, which would average at a bombing height of 9,000 feet, the Lancasters would bomb at 14,000 feet, with clouds and enemy smokescreens often obscuring their aim. “[Tirpitz] looked like a little toy to me, from up there,” Bazin commented, “though it was 900 feet long.” For Ray and his fellow Squadron 9 officers, smoke and returning fire from the ship became the only reliable targets.

“Huge mushrooms of smoke and water rose up through the smokescreen,” Ray told the BBC, and “at the moment Tirpitz started to fire…the flashes produced by Tirpitz’s 15-inch-high speed guns provided the perfect marker. We bombed the centre of the flashes.” The Squadron’s operational records indicate that Ray directed multiple runs over Tirpitz and during this mission, they would land between two and three direct hits, damaging the ship’s bow and engine. Unbeknownst to the Squadron at the time – squinting at the smokescreen from 14,000 feet in the air – they had critically damaged Tirpitz, rendering the beast of a ship useful only as a floating gun battery, removing much of her utility. The Nazis relocated her to Tromso, Norway, strategically planting her in water shallow enough that, were she damaged to the point of sinking, she would remain visible and upright above the water, obscuring signs of defeat.

On November 12, Squadrons 9 and 617 completed Operation CATECHISM, dropping nine Tallboys that overwhelmed Tirpitz in 90 seconds. “Just 90 seconds – you can count to 90 in no time at all,” says pilot Tony Iverson, marveling at how quickly these events cascaded. News would be released that the attack triggered a rapidly burning fire, which spread across the deck to the ammunition magazine for one of the main battery turrets. Thus ignited, an enormous explosion rocked Tirpitz, briefly and fearsomely lighting the black sea. She never sailed again.
​
For his bravery, Ray earned the Distinguished Flying Cross after discharge. He kept his military stopwatch on his Lancaster instrument panel, and he would keep it with him on journeys serving the Saskatchewan Government as a bush pilot during peacetime. Ray and passenger Harold Thompson tragically crashed in rural Saskatchewan in August 1959. The watch was recovered almost six decades later, at the end of a remarkable recovery journey by his family. 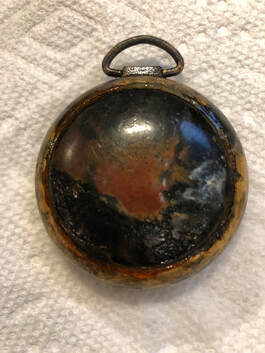 Ray’s Bombardier stopwatch from the Second World War recovered with other personal items​
Learn more about this story through Into The Mist (coming Winter 2022 with Kestrel Publications, available soon for pre-order).
Click Here to return to the articles page.