Spectators watched from the hotel as Capt Lorne RodenBush put the helicopter down for a picture-perfect arrival in what was one of many VIP flights that were assigned to Ottawa-based 450 Squadron.

I was fortunate to photograph the landing while working as a reporter at The Windsor Star. While not assigned to the story, I was nevertheless able to duck out of the Star’s nearby office and capture the event from an ideal vantage point on Riverside Drive, which overlooked the parking lot situated below street level.

Voyageur 10413, was one of 12 CH-113As that were ordered for the Canadian Army in 1963 to complement six search and rescue (SAR) Labradors for the RCAF. The first army aircraft entered service in 1964.

In 1968, the army, navy and air force were integrated into the Canadian Armed Forces. Lieutenant Colonel RodenBush, of Perth, Ontario, took command of 450 Squadron the same year.

Photographing the Windsor VIP flight was a one-of-a-kind opportunity that involved being in the right place at the right time. In fact, the hotel is now gone. It burned down in 1999 in a blaze that required the assistance of the Detroit Fire Department’s fireboat to subdue. The city of Windsor quickly utilized the site for parkland.

LCol RodenBush spoke about his distinguished career at the CAHS convention in 2004 and has since made presentations to the Ottawa, Toronto and Regina chapters. He described flights that involved VIPs such as the Prime Minister, the Governor General and members of the Royal Family as “Eggshell Missions” that required the assistance of the commanding officer.

“For me, serving Prime Minister Trudeau was the highlight of my career,” RodenBush told the Toronto Chapter in March 2006. “He was considerate of those around him. I was always referred to as Captain, but after all, one who flies an aircraft is a captain, right? I have a folder of thank you notes.”

Describing some of his adventures flying Trudeau, the pilot said the Prime Minister loved to be in the cockpit and low flying. “I accommodated those wishes more often than any sensible person should have,” he said.

RodenBush recalled that in 1971, 450 Squadron Voyageurs logged 500 flying hours dedicated to the PMO. Three aircraft were used for each mission: one for the PM and his staff, one for the media and one was backup. At one point, a VIP Flight using Bell CH-135 Twin Hueys fitted with special interiors was established. But while they were plush, Trudeau didn’t like the Huey and insisted that he have use of the Voyageur – troop seats and all.

Pierre and Margaret’s 1971 East Coast honeymoon in the French Islands of Saint-Pierre and Miquelon was noteworthy in many ways. Weather intervened, so the couple went to Newfoundland in a Coast Guard vessel. The flight crew caught up to them in Corner Brook. The next stop was Port aux Basques on the southwest corner of the island. Newfoundland Cabinet Minister Don Jamieson, who was with the Trudeaus, had a lunch packed for them – in a beer carton of all things. The PM asked if they could stop along the shoreline for a picnic. LCol RodenBush sent the other two machines ahead and selected an isolated waterfront grass field, situated over a 75-foot drop to the sea, to set them down.

What a scene. Margaret was busy throwing rocks into the ocean, Jamieson was talking to Trudeau, the PM had a carton of milk in one hand and a bologna sandwich in the other. Then, two well-weathered elderly men came over and asked if everyone was all right. They had seen the helicopter “go down.” As LCol RodenBush recalled, “With that I asked them if they would like to see the Prime Minister of Canada. If only I had a camera to capture the looks on the two faces. They didn’t seem to know whether to jump in the car and race home to tell family and friends that the Prime Minister of Canada was over there in the field, or to stay and talk to the Prime Minister. They did the latter.”

RodenBush also remembered a hair-raising flight to the Magdalen Islands. The crew had been on an Eastern Canada tour. After Churchill Falls, they overnighted at Gaspé prior to a planned trip to Entrée Island, the smallest and most unconnected island in the Magdalens. Rather late in the day, the crew dropped Trudeau and Minister Jean Marchand at a motel some distance from the Gaspé Airport. Returning to the airport, the crew learned that the second helicopter was unserviceable, and also that the weather forecast was poor.

The next morning the crew flew to the motel to pick up Trudeau and Marchand. Trudeau said: “I understand that you aren’t going to take us to Entrée Island.” LCol RodenBush explained that not only did they not have a backup machine, but also that the ceiling was only 200 feet and visibility was less than a mile. Trudeau then said: “You’ve flown in weather that bad before?” And Marchand piped up with “If I were a General and ordered you to fly – would you?” LCol RodenBush replied that “I would tell the General of the risks, and if he insisted, then I would fly.” Both Trudeau and Marchand then insisted on going. RodenBush told the PM that he would have to return to the Gaspé field for overwater gear and to top up the fuel tanks. And his staff was to limit the media accompanying them.

When they got to the airport, they learned that the fuel bowser had departed for Moncton. The pilots calculated that there was just enough fuel for the 288 km (160 nautical miles) trip. Because of the weather and with only a 25-watt low frequency beacon at the islands, LCol RodenBush asked the crew of a Buffalo, which they had earlier requested, to cover for them as the helicopter took off, just above the waves. The Buffalo was on top of the clag reporting on their progress. About halfway, the winds shifted and the helicopter now faced a 25-knot headwind.

“Clearly it was becoming a bad hair day,” LCol RodenBush said. “The balance of the flight was pure white knuckle. We landed at Entrée Island with both gauges bouncing on empty. We didn’t have enough fuel to fly to the airport. A boat brought fuel to us.”
Trudeau’s trip to the Chicoutimi Winter Carnival was memorable as well. The day after the carnival, the PM was to travel to Alma, 50 miles to the west. While en route, RodenBush received a call from the RCMP at Alma about a threat – the PM was going to be shot when he disembarked from the chopper! Mr. Trudeau declared in typical fashion that he would proceed as planned; he was not going to be deterred by some supposed danger. The modus operandi was for LCol RodenBush to exit first, while the helicopter was being shut down. He would stand by the steps and salute the PM as he left the aircraft. “I can tell you that I was one relieved fellow when nothing happened,” the pilot said.

LCol RodenBush’s pride in 450 Squadron is evident and certainly well-placed. Speaking of the Labrador in particular, it’s noteworthy that he was the co-pilot for Leonard LaVassar, the Vertol chief test pilot, in bringing the Vertol 107 – the first twin turbine helicopter to fly – to Ottawa in December 1959, for a demonstration to government and military decision makers. An order for 18 CH-113s at $1-million each, followed.

The Voyageurs served with 450 Squadron until 1975, when they were replaced in the task of supporting the land forces by the mighty Boeing CH-147 Chinook. Voyageurs then went into SAR service, and were modified to a common SAR standard to complement the Labradors. The CH-113 fleet compiled an illustrious record as one of the world’s finest dedicated SAR helicopters until they were finally retired in 2004.

LCol RodenBush was honoured to have flown in the last aircraft in the fleet, Labrador 11301, on its final delivery flight to the Canada Aviation Museum on July 26, 2004. In all, Labradors performed more than 20,000 missions and nearly 190,000 hours of flying over 40 years of faithful service.
​
In the United States, the aircraft is still in service with the US Marine Corps as the CH-46 Sea Knight. 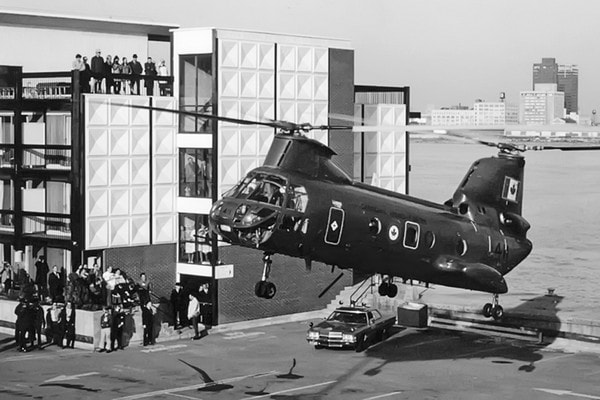 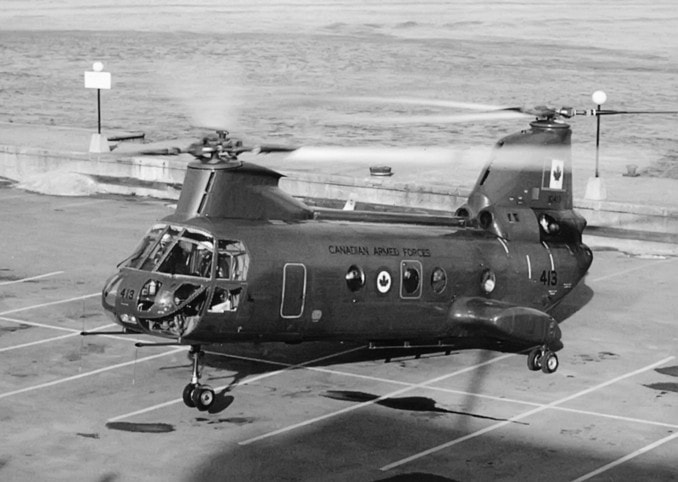 Back to the Archived Articles page <