Prairie Flying's First Airplane
The first airplane purchased was a war surplus Tiger Moth CF-DDN. The life of this aircraft was short lived – the D.O.T. (Department of Transport) grounded it due to poor fabric. It eventually ended up in a scrap pile in a farmer’s yard. This was indeed a big financial setback, however, a loan from Art Davis’ uncles who farmed outside of Regina, put us back in business. 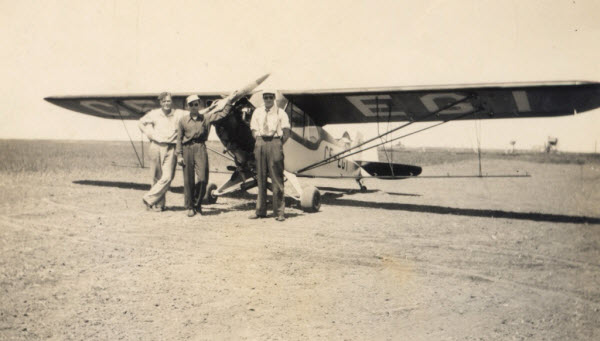 L–R: Art Davis, John Howe and Bob MacKnight, with Prairie Flying's second airplane, a 65 hp Piper J3 Cub
​Prairie Flying’s second airplane – a  65 hp J3 Cub​
The second airplane purchased was a 65 hp J3 Cub. We spent the summer of 1947 barnstorming at many towns in southern Saskatchewan. We loaded up the old 1928 Star Car with four 10-galleon drums of gas, a tent and bedrolls then heading out following the sports day circuit. A total of two hundred hours was put on the airplane that summer; one person-at-a-time at three dollars a ride. When business was good, we slept in hotels, drank beer and ate steaks. When business was bad, we pitched the tent and ate baloney sandwiches. In the meantime, we had applied and received on July 11th 1947, a license from the Air Transport Board of Ottawa to operate from a base at Regina, a commercial air service for recreational flying, aerial advertising, aerial photo and aerial pest control.

1948 – Prairie Flying designs first spray rig – “The Flying Water Can”
Many hours were spent designing, re-designing and testing our first spray rig. The King Farm northeast of Regina was used as a testing base. We flew hundreds of swaths up and down their stubble fields using different pumps, booms, nozzles and mix for the 24D. Finally it worked. We had excellent results with using fuel oil as a carrier. We could do 60 acres a load at a total solution of 2 quarts per acre. We now had a viable operation. Johnny Poole, air engineer at Saskatchewan Government Airways inspected and approved the installation. We were ready to go. We named it: “The Flying Water Can”; the first licensed aerial spray rig in Canada. The date was May 15th, 1948. 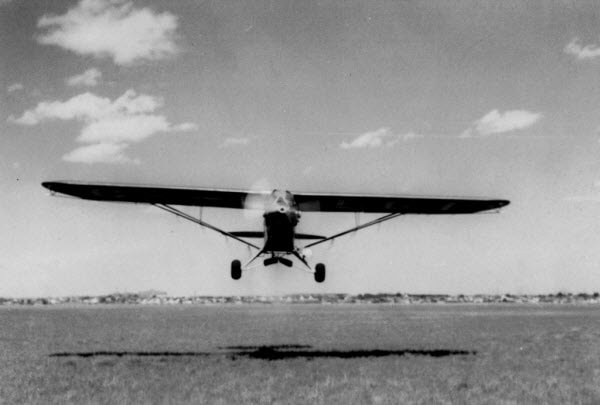 The Flying Water Can in Action! (© John Howe)​
Out in the field and in the air
It was a great day in the spring of 1948 when we pulled out of Regina to launch our new enterprise. Paddy Watson was driving an old 1928 International truck pulling a homebuilt bunkhouse, Art Davis and John Howe followed with a 1926 Star Car and Bob Mac Knight flew the pride of our possessions: “The Flying Water Can”. Our first taker was a farmer south west of Regina. He said, “I don’t think the damn thing will work, but I have so many weeds in the crop on the north section, Ill give it a try anyway.” Our job was only a partial success – we did a 100% job of killing the weeds but some spray drift had eradicated his wife’s flower garden. We camped in his yard for three days. He was finally happy to see the weeds dying and the crop still standing. He said, “To heck with her flowers – they don’t make me any money”. He paid us and we were back in business. We had a successful season and now knew that crop spraying could become an important part of any small aviation business.
Smoke and Banners
We were not able to get a charter flying license at that time out of Regina, so decided to try some other bold ventures namely – banner towing, smoke writing, aerial photography and a Northern Caribou hunt. None of these enterprises got off the ground.

The Water Can in a field.​ (© John Howe)
1950 – “Jackpot year’ with a new Aeronca 90 hp Champ
The spraying season in 1950 turned out to be our “Jackpot year”. We had brought a new Aeronca 90 hp Champ and leased another. There was a drought in the Dakotas and a continuous southeast wind brought hordes of grasshoppers into the lush wheat fields along the Soo Line. Our three “Flying Water Cans” sprayed thousands of acres.
​1953 – Acquired hanger, and consolidated
The spraying business enabled us to get further involved in the aviation business and by 1953 we had moved into an old Air Force hanger, acquired a charter license and a Cessna dealership. Of course by this time we were all married. Charter and aircraft sales were not very lucrative and it did not take long for us to realize that the business could not support four families. As a result, Watson and I bought out the other two partners. Art Davis took a job with Air Ambulance and operated the base of Saskatoon for many years. Bob MacKnight took a job with an oil company at Saskatoon. Over the years, the spraying became less important to us and we concentrated more on the other phases of business. 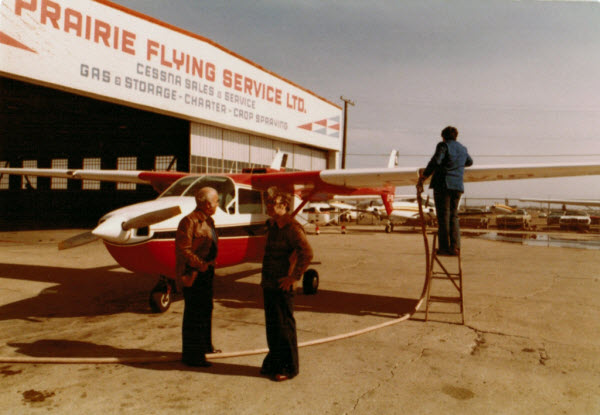 L–R: John Howe with brother Tom, in front of a Cessna Skymaster
​(© John Howe)​
​Cessna dealership
We had a direct factory dealership with Cessna at Wichita, Kansas. They had a good product line and became very popular in our area. The 172 was a safe airplane for a new pilot to gain flying experience. The 180 and 185 were popular in the north as they could be operated on wheels, floats or skis. We operated the dealership for over 25 years and won an award one year for selling the highest number of airplanes. I enjoyed demonstrating and selling the airplanes.all my life.
​Shop, Parts, Diversification
Our “B” licensed shop was always busy. We were able to rebuild the damaged airplanes taken on trade. We set up training on the job program for our shop personnel. With all this plus the charter, flying training and the parts business, we became a very diversified operation.
​Gratitude
Looking back now I feel I was very lucky that I had a partner like Paddy Watson and a wife and family that stood by me. Paddy died in the early ‘70s – we bought the company and operated it until 1977. We enjoyed the good times and survived the bad times – we had fun.
​Postscript
My father wrote the above article in 1977 after he had retired. In November 2005, John L. Howe was inducted into the Saskatchewan Aviation Hall of Fame, which recognized his many achievements as a pioneering aviator
Back to the Archived Articles page <