by Gord McNulty, CAHS Vice President
with photos by Gus Corujo
The Northern Lights Aero Foundation held their Elsie MacGill Award Gala in October after having to postpone the event for two years. A wonderful slate of honourees, the awards span seven categories that include business, education, engineering, flight operations, government, trailblazer and rising star. 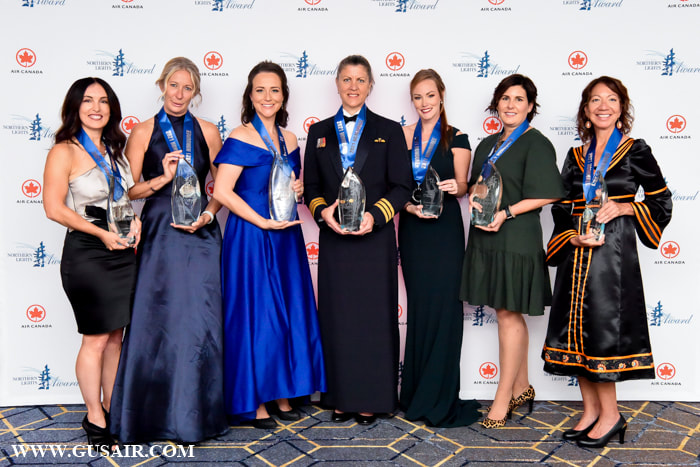 It was a pleasure for my wife, Angie, and I to attend the 12th Annual Elsie MacGill Northern Lights Award Gala on behalf of the CAHS. Representatives of Canada’s aviation and aerospace industry gathered in Richmond Hill, ON, on 16 October to celebrate the outstanding accomplishments of women in all sectors of the business. The impressive event, attended by 291 fully vaccinated enthusiasts, provided a welcome opportunity to salute remarkable achievements after a two-year hiatus due to ongoing pandemic challenges.

In a lively and inspiring evening, the Northern Lights Aero Foundation (northernlightsaerofoundation.com) recognized and showcased Canadian women --- including Indigenous achievers --- who have diverse accomplishments in aviation and serve as role models and trailblazers.   As the premier organization in Canada dedicated to advancing women in aviation and aerospace, the Foundation has received generous sponsorship from across the spectrum of the industry.

The event is named in honour of Elsie MacGill, the first woman responsible for aircraft design and an aeronautical engineer who was instrumental in Canadian production of the Hawker Hurricane.

Each of eight honourees received a letter of congratulations from CAHS President Gary Williams and a free one-year membership as well as a sample copy of the CAHS Journal.

Gus Corujo (Gusair.Com) provided excellent photos of the event, led by emcee Lynne McMullen, Treasurer/Secretary of the Foundation board of directors. The proceedings featured video tributes to the various award recipients outlined by announcer, journalist and pilot Jacquie Perrin.  A keynote speech was given by Dr. Dave Williams, Canadian astronaut on two missions aboard NASA space shuttles, one on Columbia and one on Endeavour.   Everyone enjoyed a fine dinner.

The deadline on submissions for the 2022 award nominations is March 31, 2022.  Complete information on the nomination process is currently on the website, northernlightsaerofoundation.com
Click Here to return to the articles page.