No Old, Bold Pilots
is a biography of bush pilot, builder and community leader Svend Serup.

Submitted by Sheila Serup
Svend became enamored with flying during WWII after watching daily bombing raids passing over his home country of Denmark which was occupied by the Nazis. As a young boy he witnessed a great diversity of aircraft flying overhead, and developed a keen interest in their maneuverability, speed and power.

He arrived in Canada in 1949 with just $50 in his pockets and no English language skills. In Ontario, he was engaged in various jobs including farming and horse logging in northern Ontario. With two Danish friends, Svend drove to British Columbia and found work in its northern forests.

In 1954, he leaped at the chance to learn to fly.  Svend earned his pilot’s license after being taught by a female aviator, Helen (Dixon) Harrison-Bristol, who flew military aircraft in WWII. He trained on three types of light aircraft: Flying Super-Cub, Luscombe, and Cessna 140.

My first flight was on August 1st, 1954 in a two-seater Cessna 140. Three weeks later, on August 21st, she told me: “You are on your own.” And she stepped out of the plane on the tarmac. I can still remember this, because once I got in the air, I patted the empty seat beside me. It was a wonderful feeling to fly this plane on my own!
​
Svend learned bush flying in the harsh, unforgiving Rockies in his Cessna A185F on cap floats. The Peace reach of Williston Lake was a new frontier for forestry with unforeseen hazards. Svend took calculated risks that few men dared during his 30 years of working in the Williston Lake area. 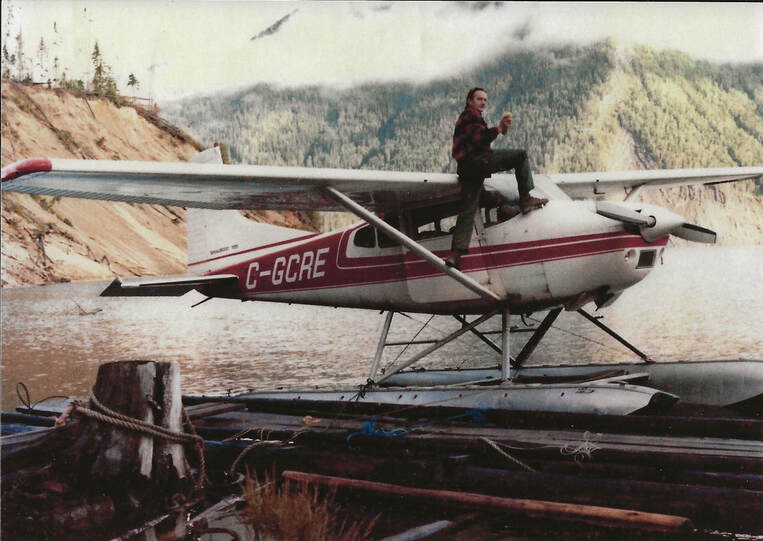 His stories of flying through treacherous snow squalls, logging in remote woods, and being pursued by a pack of gray wolves are woven through the pages of this book. Svend purchased his plane new in 1975 and flew it for 15 years through some of the most rugged terrain and violent weather conditions in B.C.

Svend chose the Cessna 185 skywagon for its reputation as a backcountry workhorse which purred like a kitten in the most extreme weather conditions. The six-seater Skywagon had a 300-HP piston engine, and its maximum takeoff weight was 1519 kilograms. The cap floats took a severe beating from waves and floating wood debris which littered Williston Lake. The Skywagon was introduced in 1961, bringing more power and a higher useful load. Although production ceased in 1985, its longevity could be seen decades later on Alaskan snowfields and northern BC lakes.

The title of the book comes from a passage in which he describes an almost impossible, near fatal flight in which he was boxed in the ramparts of the Rockies.

Forty miles of flying through the mountains in snow showers was not a pleasant thought. Now I was being battered again by turbulence. I could still feel the grip of the storm which at times shook the plane as a dog shakes a rag. On my right, I could see the valley and the Pine Pass over the Rockies which I needed to cross to reach Mackenzie. The narrowness of the valley was both impressive and chilling. How would I make a 180 degree turn if I had to turn back? Caution is the virtue which allows pilots to grow old. I quickly banked my plane in a tight turn to retrace my route back to Hudson’s Hope on the Peace River.

Svend includes in his book his Honour Roll of Cessna pilots he worked with over the years in the Prince George, Mackenzie and Peace Regions. They include: Ernie Bodin, a Mackenzie pioneer with various business ventures including a tugboat company; Don Flynn, a forest industry innovator and founder of PG Wood Preserving Ltd.; Bill Kordyban Sr. who founded Carrier Lumber; Wilfred Leboe of Leboe Bros Sawmills who, despite losing his arm in a sawmill accident, enjoyed an illustrious bush flying career; Dean Shaw who began the challenge of constructing particle board and founded NewPro; Bob Sindia who established several mills in the McLeod Lake and Mackenzie areas, Arthur “Short” Tompkins who owned an oilfield contracting firm in the Peace River; and Erik Winther, a founder of East Fraser Logging. These bold men are among the pioneers and builders of northern B.C.

All worked in the forestry industry except one. They all came from humble backgrounds with limited means, Some, like myself, grew up during the German occupation of Denmark and immigrated with meagre funds but with tremendous optimism, hope and resilience. They lived through the Depression, on the Prairies, on ranches and in forests, learning their livelihoods from their fathers and using their greatest resources – their hands and their brilliant minds.

This biography also describes Svend’s forays into Canadian political arenas – locally, provincially and federally. A man of letters, Svend was compelled to speak up for the underdog and give voice to those who may not have been heard.
Click Here to return to the articles page.