By John Chalmers
CAHS National Membership Secretary
posted August 2022
In aviation museums all across Canada we see the results of work by volunteers and contractors who have restored aircraft as part of our aviation heritage to preserve them for present and future generations. Airliners, warbirds, bush planes, float planes, gliders, homebuilts and other things that fly can all be found in our museums.

Seen during my site visit to see progress on the CF-100 Canuck (as described below) are, left to right, Byron Reynolds (wearing a mask because he had a cold – not Covid!); museum committee volunteer Mark Eberle; Byron’s son Ted, a pilot and AME who is restoration leader on the project; museum executive director Brian Desjardins; and Sean Roach, representing City of Calgary.
Here in Alberta my travels have recently taken me to see four projects either in the works or finished for display. They are a de Havilland Mosquito being restored at the Bomber Command Museum in Nanton; an Avro Canada CF-100 Canuck under restoration in Wetaskiwin; and a Bell P-39 Airacobra and replica German V-1 flying bomb at the Alberta Aviation Museum.

The Mosquito
The Mosquito under restoration at Nanton is owned by the City of Calgary, rescued from deterioration when the Calgary Mosquito Society was formed to prevent its sale by the City. The CMS then offered to restore the aircraft. All told, it was a process that took five years, and vigorous fund raising then began to for restoration.  Now being rebuilt by volunteers, the project is in its tenth year. When completed, it will be returned to Calgary for static display, but with rebuilt twin V-12 liquid cooled Merlin engines that can be run for demonstration purposes.

Rebuilding or restoring aircraft often results in unexpected problems or in needing replacement parts that are hard to find. Sometimes the hunt for parts results in success, and sometimes parts are obtained by trading parts with other museums. In the case of the Mosquito, the war in the Ukraine has resulted in a shortage of special plywood needed for the job.

The fuselage of the “Wooden Wonder,” seen in restoration at Nanton, displays the original tail fin of Spartan Air Services, when the aircraft was registered as CF-HMS.    (Richard de Boer photo)
The special plywood used in restoration has become scarce. To start, the supplier of the plywood is in Austria, which had a temporary shutdown due to the COVID-19 pandemic. Then it became clear that the supplier did not make the plywood, but acquired it from a custom mill in Russia.

As Mosquito Society president Richard de Boer explains,   “Every sheet of plywood that de Havilland used in the Mosquito was three layers, or veneers, of Baltic birch. The thinnest ply they used was 1 mm and the thickest was 6 mm.  Regardless of the finished thickness of the plywood sheet, all were just three layers, and all were made to specific standards, known as British Standard 6V3. Every sheet of plywood we bought from Austria was stamped "BS 6V3" just as it appears on our airplane when it was built! With the sanctions against Russia, our supplier no longer had access to this mill and could not supply us. That started the hunt for alternative suppliers.” 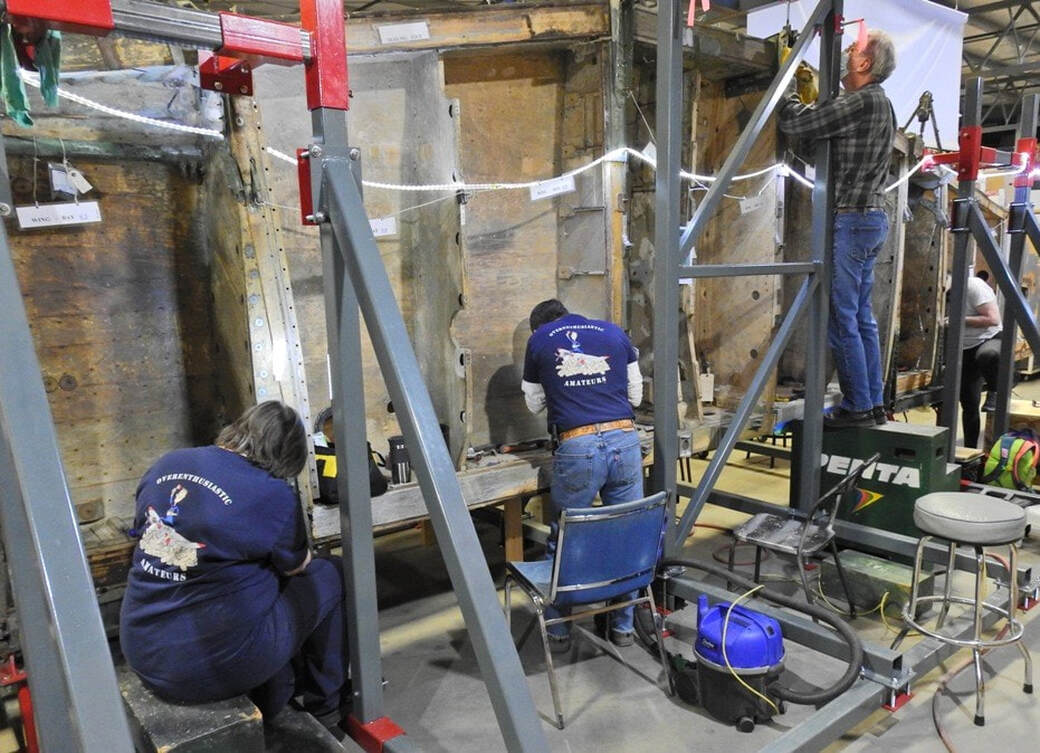 Busiest days on Mosquito restoration are Saturdays, when up to 20 volunteers work on the project. Left to right, Colette Provost, Michael Harrington, Nigel Cornwell and Catherine Desrochers are working on the underside of the wing at the fuel tank bays, undercarriage bay and bomb bays, from which access panels have been removed. The wing is held in place by a jig specially designed for the purpose by Andy Woerle.      (Richard de Boer photo) 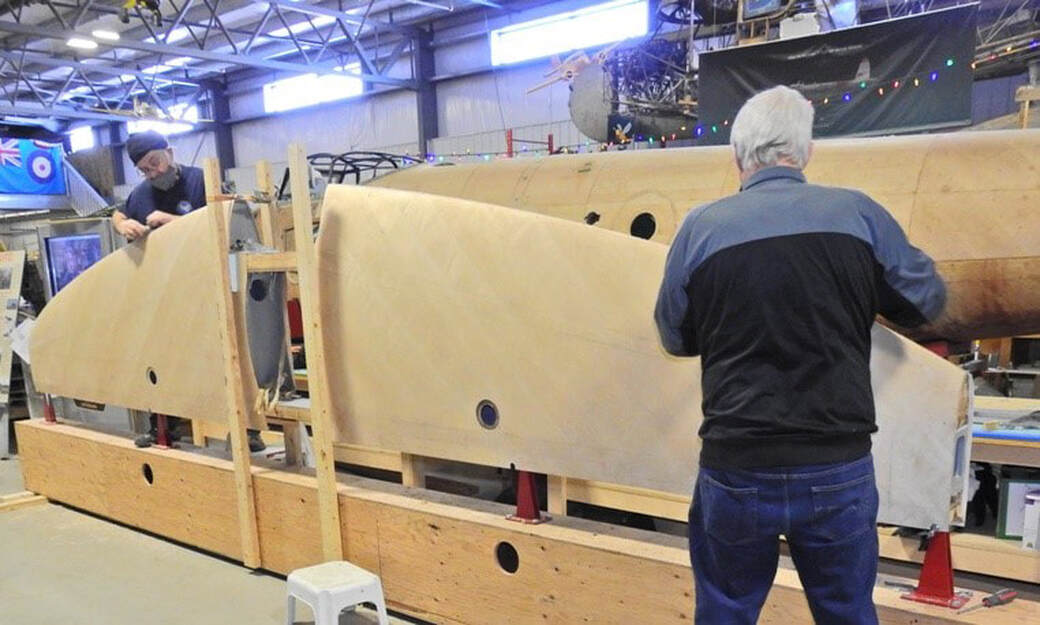 Gary Toffelmire, left, and Cam Barker are doing the final blending of the new skin of the horizontal stabilizer to the leading edge. The stabilizer needed all new plywood skins as it had been coated in epoxy and fibreglass to protect it from rock damage on gravel runways. In fact, some rocks were found inside the stabilizer! The entire structure had to be taken apart and reglued because of deteriorated glue in some places.       (Richard de Boer photo)
More information and contact for the Calgary Mosquito society can be seen at its website when you click here, especially if you know a source for the plywood the aircraft needs.

The Canuck
In Wetaskiwin another aircraft also has a connection to Calgary. It is the CF-100 Canuck undergoing restoration at the shop of Historic Aviation Services Inc. It is there that proprietor Byron Reynolds is overseeing the restoration of the former RCAF jet from The Hangar Flight Museum in Calgary. For decades the Canuck sat outside in Calgary and weather, birds and rodents took their toll. 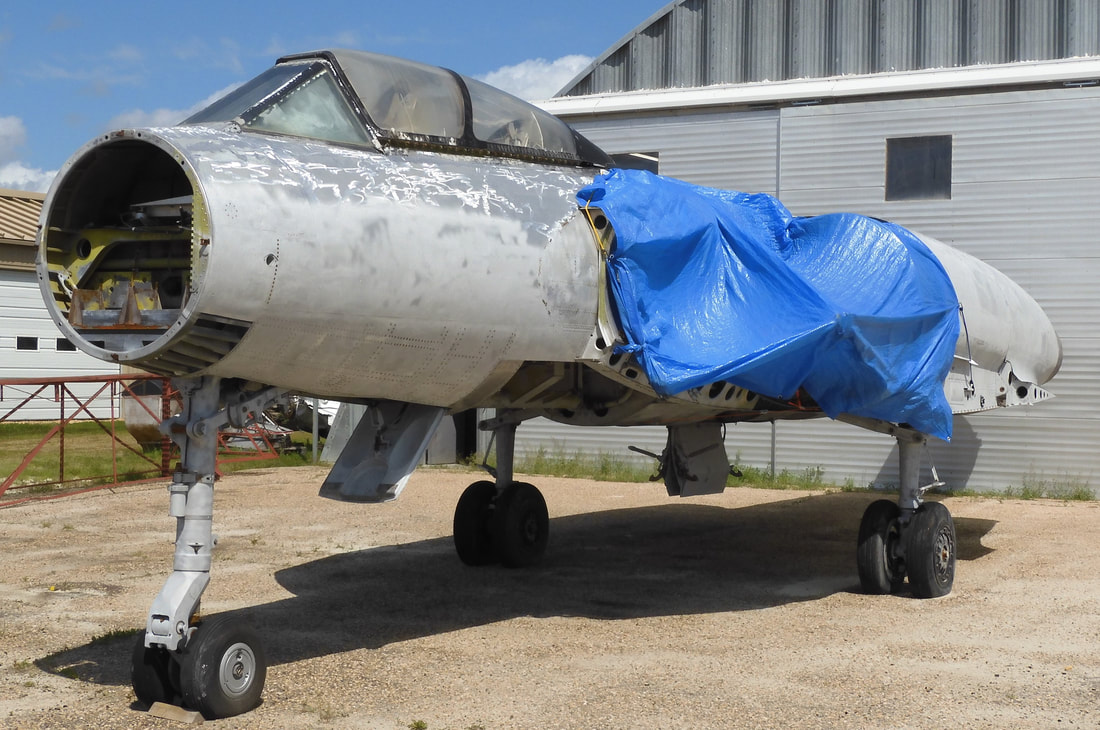 Stripped of paint, the fuselage outside the shop awaits its turn for further restoration while steady activity indoors has been made in repairs and replacement of other components.
In late June, a site visit to the shop was made by representatives of the museum, not just to see the progress, but also to deliver an ejection seat for the Canuck. “We were pleased to see the progress of the restoration with the aircraft scheduled to return in the fall of 2023 after three years of restoration,” says museum executive director, Brian Desjardins. “It will be restored to full static display with its original RCAF paint scheme and markings. We are very grateful for the funding from the City of Calgary, Alberta Government, and many private donors that made this large-scale restoration possible.”
“Because the aircraft was not previously prepared properly before the paint was applied, it did not adhere as it should and in some areas exfoliation deeply penetrated the skin. This allowed major surface corrosion to form between the skin and paint. It took many applications of paint remover, media blasting and lots of old fashioned “sand and scrape” for paint removal, which took about six months collectively for all components,” says Byron. With the paint removed, the work began to remove corrosion and replace damaged metal areas.

The wings have been re-skinned and are now complete. In other cases, such as dealing with engine cowlings and nacelles, reconstruction was necessary. In fact, using one cowling as a pattern a new one had to be made largely from scratch. As well, Byron says the undercarriage was in “terrible” condition, but repairs are now mostly complete. 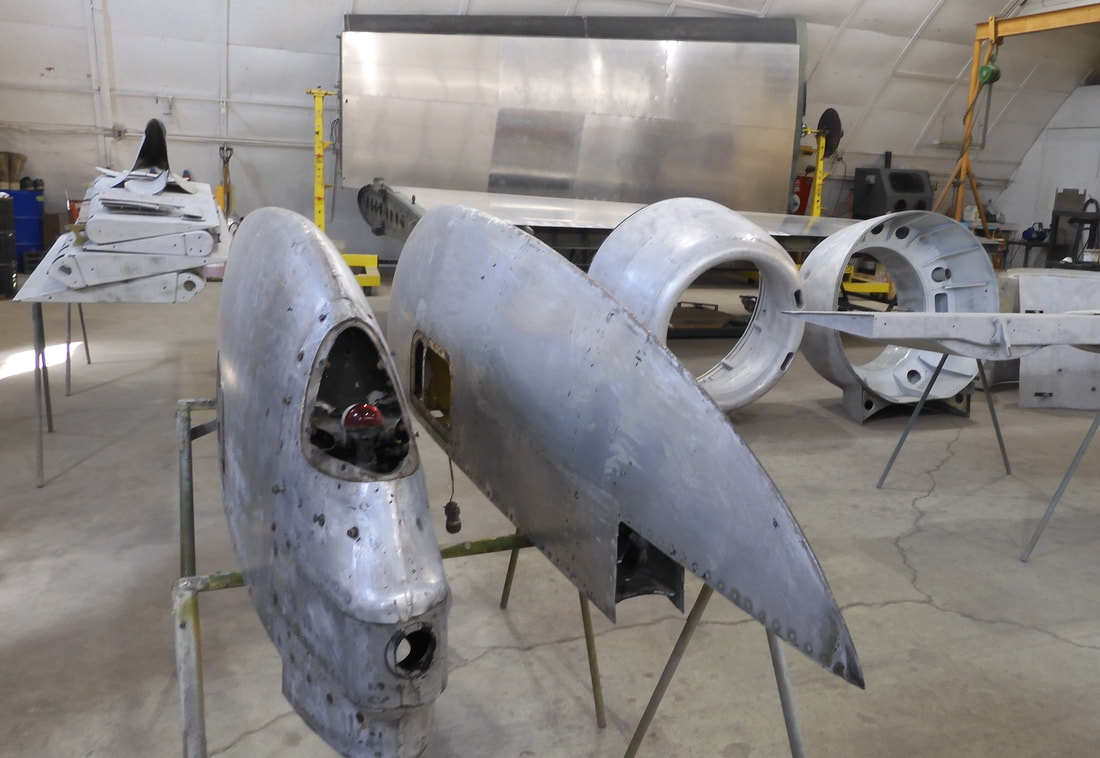 Restored components for the Canuck, seen in the shop of Historic Aviation Services, Inc., include a re-skinned wing section at rear; ailerons and flaps at left; two engine cowlings, one of which required extensive rebuilding; and wingtips in the foreground.
“Now that we have dealt with replacing corroded metal surfaces  and are finishing up internal repairs, the project is on track and proceeding well. We expect it to be completed in about one and a half years”, says Byron. It will be the second aircraft restored at his shop for The Hangar Flight Museum, the other being the Hawker Hurricane, which was completed and delivered by the Calgary Mosquito Society in 2019 for display at the museum in Calgary. More about the Calgary museum can be seen when you click here.

The Airacobra
During the Second World War, thousands of American warplanes passed through Edmonton on ferry flights via the Northwest Staging Route to the Soviet Union. After delivery to Fairbanks, Alaska, under the U.S. Lend-Lease Program they were received by the Soviet crews responsible for the final flights to the USSR. The Bell P-39 Airacobra fighter was the most common aircraft delivered on that route.

The airframe for the Airacobra being restored at the Alberta Aviation Museum in Edmonton was provided by the Wetaskiwin-based Reynolds Heritage Preservation Foundation and is a collaborative project between the Museum and the Foundation. The aircraft is being restored with parts from multiple P-39s, including parts from the one that crashed near Wetaskiwin in 1942 and was salvaged by the late Stan Reynolds, for whom the Reynolds-Alberta Museum is named. That museum incorporates aircraft, vehicles and farm machinery from Stan’s vast collection. Restoration is being done by volunteers in the museum’s shop and when completed, the Airacobra will be displayed on a shared basis between Edmonton and Wetaskiwin. 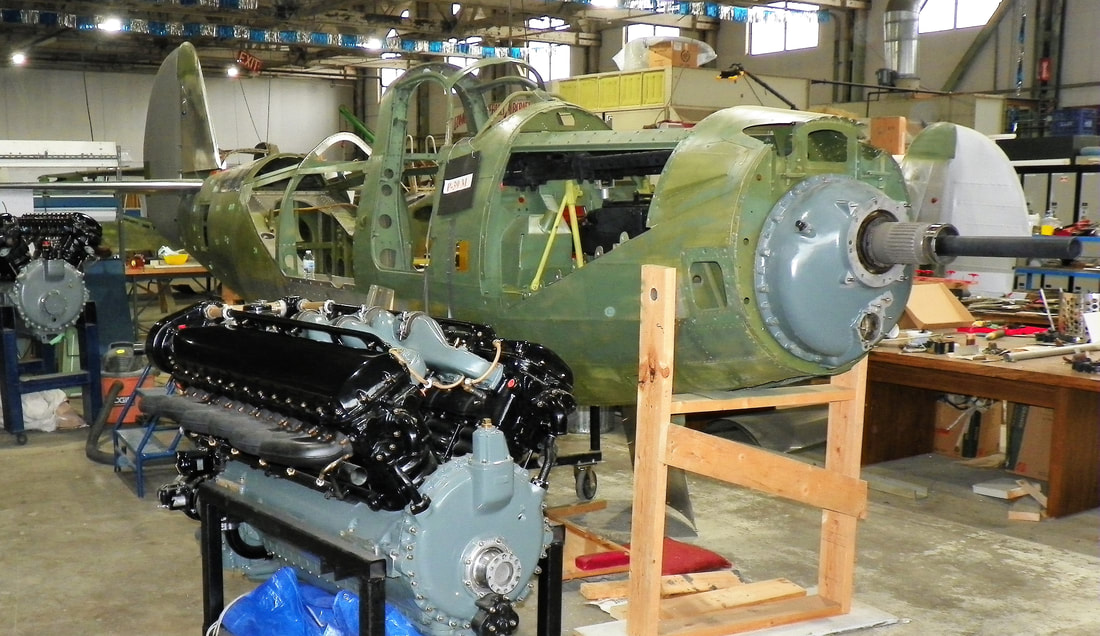 The P-39 Airacobra was powered by a 1200 horsepower Alison V-12 liquid cooled engine, shown here, which is mounted behind the pilot, with the driveshaft for the propeller extending underneath the pilot’s seat. The aircraft was armed with a 37mm canon, seen protruding from the propeller hub. The heavily armed P-39 was additionally equipped with .30 and .50 caliber machine guns, depending on the model.
V-1 Flying Bomb
The newest addition on display at the Alberta Aviation Museum is a half-size replica V-1 flying bomb. Starting in June 1944 during the Second World War, Germany fired thousands of the V-1 “buzz bomb” as it was often called at London, with over 2,300 reaching the city. Powered by a pulsejet engine, and 27 feet long, the two-ton V-1 could reach London in 15 minutes when fired from the French coast. When the engine cut out, the flying bomb would drop, exploding upon impact, causing extensive damage, over 5,000 deaths and injuring some 16,000 Londoners. 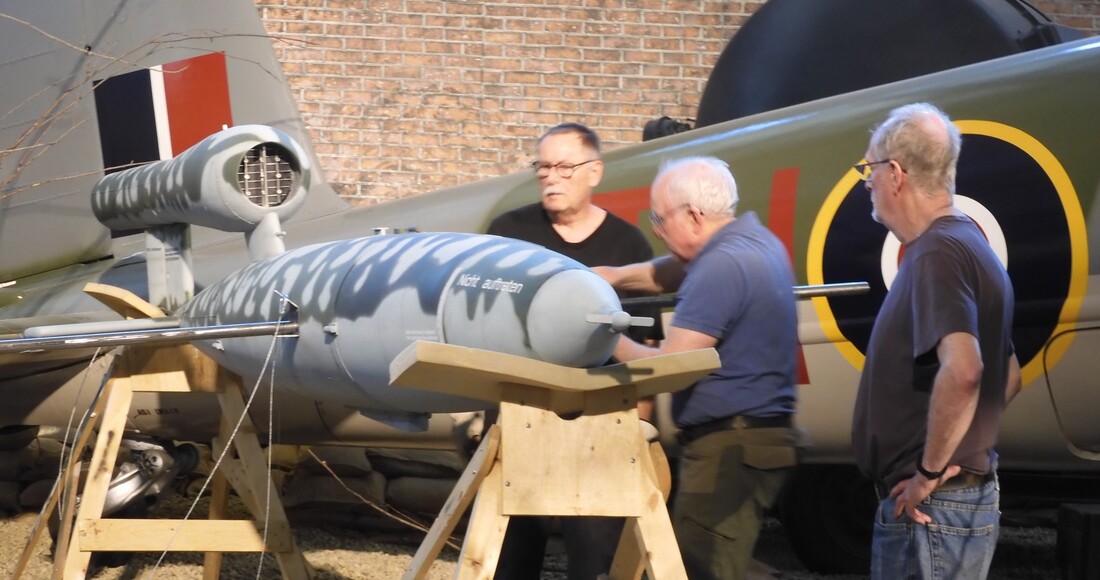 At left and centre, respectively, are Vic Scheuerman and Phil Vere preparing to hang the V-1 in flight at the Alberta Aviation Museum. Standing at right is Steve Finkelman, who would be video recording the placement of the rocket, which took hundreds of hours of volunteer time to build. In the background is the museum’s de Havilland Mosquito.
The V-1 replica now hangs from the museum’s ceiling, appropriately alongside the restored Mosquito named for Edmonton-born Russell Bannock DSO DFC, who piloted Mosquitoes during the Second World War, served as commanding officer of No. 418 (City of Edmonton) Squadron, RCAF, and brought down 19 V-1 flying bombs as well as scoring 11 victories over enemy aircraft.

The Mosquito, the Canuck, the Airacobra and the V-1 all add to the priceless displays of aircraft for Canadian aviation museums. The Canadian Aviation Historical Society has 23 Museum Members. Stories about their events and projects are all welcome for the CAHS e-newsletter.  Contact the editor here.
Click Here to return to the articles page.