New Home for a Legendary Aircraft

by John Chalmers,
CAHS Membership Secretary
posted October 2022
An aircraft with a special place in Canadian aviation history is the latest to be located in the Royal Aviation Museum of Western Canada in Winnipeg. The Lockheed Electra 10A, with call letters CF-TCC, was one of the first six aircraft purchased by the newly-established Trans-Canada Airlines (TCA) in 1937.

It is appropriate that the 85-year old Electra has its new permanent home in Winnipeg, as it first flew there to train pilots before being put into service with scheduled flights. 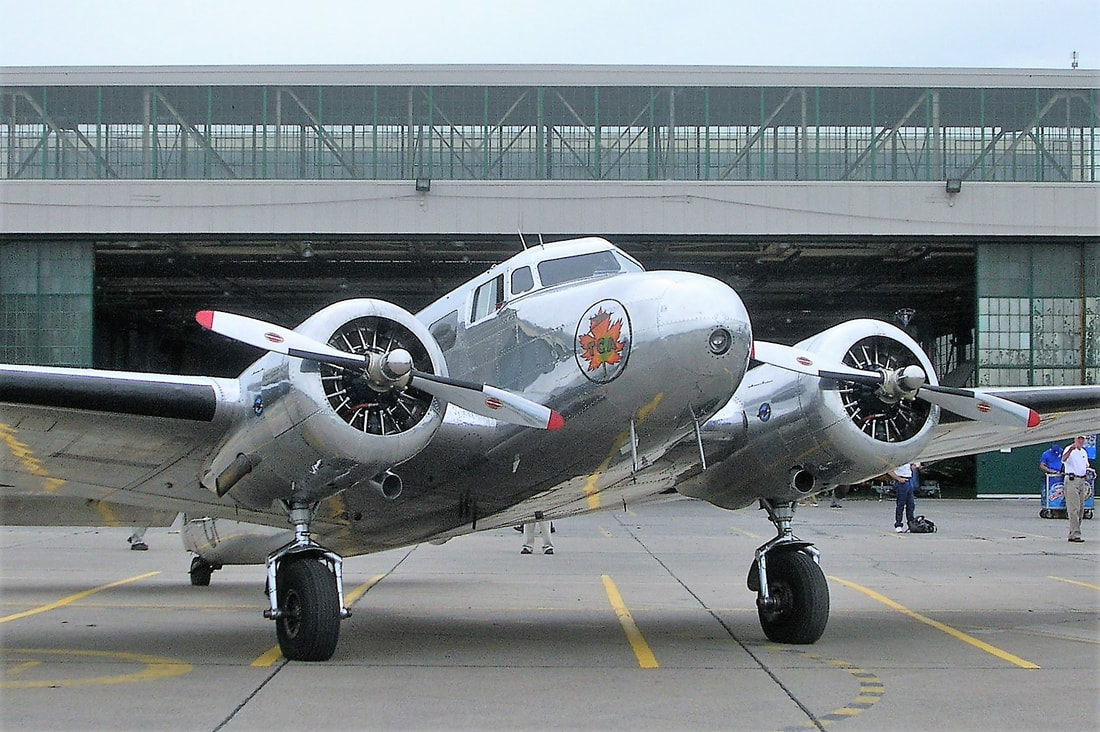 Lockheed Electra CF-TCC is seen here at Downsview in June 2007 when the CAHS convention attendees visited the site, and the Electra was one of the aircraft flown in for the Wings and Wheels event at the airport. (Chalmers photo)
The Electra has been stored in an Air Canada (formerly TCA) hangar at the Winnipeg International Airport, and on September 7, the airworthy veteran taxied across the tarmac to be donated by Air Canada to the museum. At the controls were two retired Air Canada pilots who are CAHS members, Gerry Norberg and Rob Giguere. As the museum is located right at the airport and accessible from runways and taxi strips, TCC was “driven” straight to its new home.

The aircraft was back in the news on that occasion, on the front page of the Winnipeg Free Press  (www.winnipegfreepress.com). The story can be seen when you click here. Thanks go to Free Press editor Paul Samyn for permission to share the story.

After being sold by TCA in 1939, TCC passed through the hands of several owners for the next four decades, but was flown across Canada in1962 by six original TCA pilots to celebrate TCA’s 25th Anniversary. Then in 1983 TCC was acquired again when it was purchased by Air Canada. It was restored and flown across the country to celebrate its 50th Anniversary. Since 1986, the veteran airliner has been maintained in flying condition, flown on special occasions to commemorate events in TCA/Air Canada history. 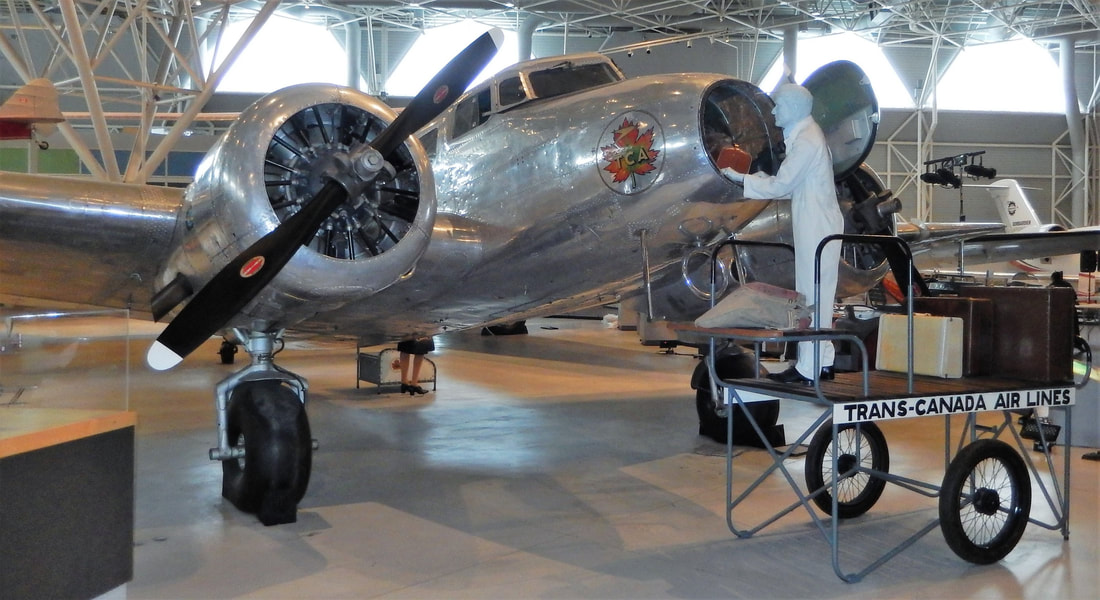 Lockheed Electra, CF-TCA, seen here at its home in the Canada Aviation and Space Museum in Ottawa, is a sister aircraft to CF-TCC at the Royal Aviation Museum of Western Canada in Winnipeg. Only 140 Model10 were Electras built by Lockheed. (Chalmers photo)
At least three CAHS chapter presidents have a personal association with Electra CF-TCC. Sheldon Benner, president of the Toronto chapter, had a flight in the aircraft when the convention was held at the Canada Aviation and Space Museum. Sheldon recalls that, “I flew on TCC at our convention in Ottawa in 2007. After take-off we flew for about ten miles up the Ottawa River, then back tracked and circled the Parliament buildings before heading over to the museum and airport.  We were airborne for about thirty minutes.” He is seen below with the pilots and the aircraft after the flight.

Sheldon Benner, at centre, is seen with pilots Captain Al McLeod, left, and Captain Ken Patry, who at the time were the pilots with the most experience flying Electra TCC at the time. (Photo courtesy of Sheldon Benner)
While airborne, Sheldon was taking pictures from the aircraft and his photo below shows the museum. Since then, the museum has expanded with the addition of both buildings and more aircraft. 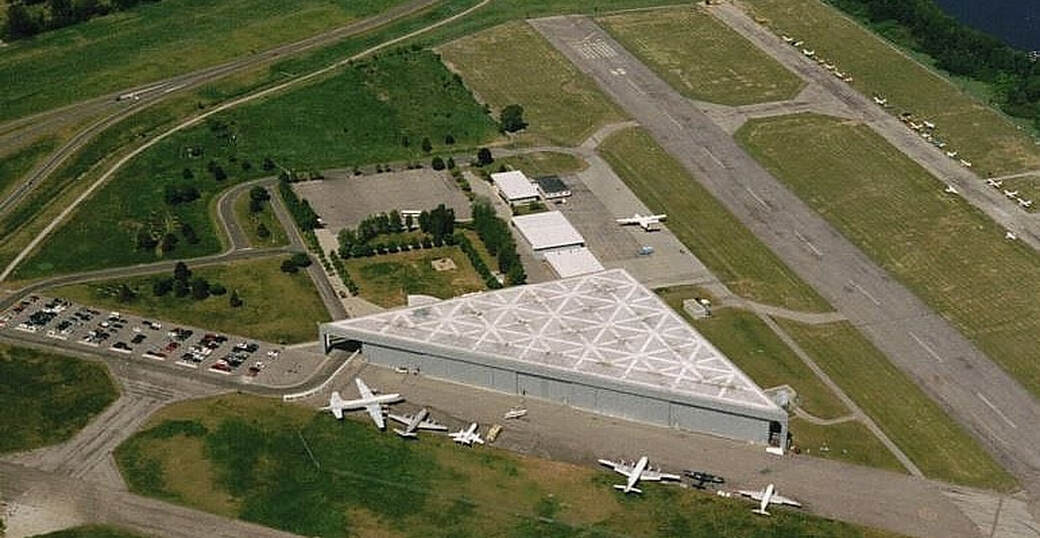 An earlier aerial photo of the Canada Aviation and Space Museum in Ottawa. (Photo courtesy of Sheldon Benner)
CAHS Montreal chapter president, Jim Mason, also has personal memories of TCC. A retired Air Canada pilot, he flew with the airline for nearly 37 years, and when Electra CF-TCC was taxied to its new permanent home in the Winnipeg museum, Jim was aboard with nine other former Air Canada staff, including several pilots, for TCC’s final journey.

TCC is shown here in storage at Winnipeg before being rolled out of the hangar, started up and taxied to the Royal Aviation Museum of Western Canada. (Screen shot from video by Jim Mason) 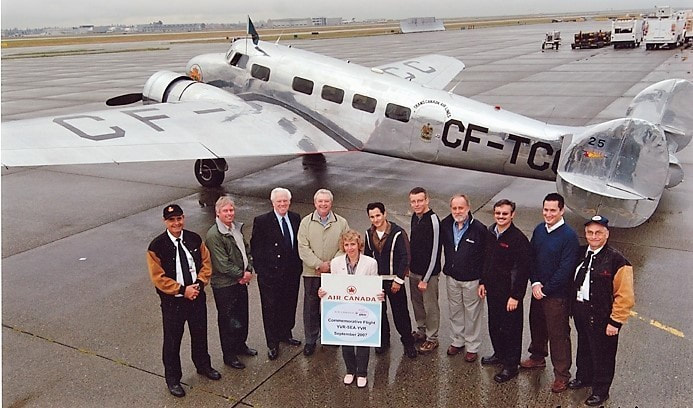 Air Canada captain Jim Mason, far left, and fellow captain Gerry Norberg, far right, are seen with other Air Canada personnel prior to flying Electra CF-TCC in September 2007 on a 60th anniversary re-creation of the aircraft’s first flight with Trans-Canada Airlines from Vancouver to Seattle in 1937, the first year TCC was flown as an airliner. (Photo courtesy of Jim Mason) 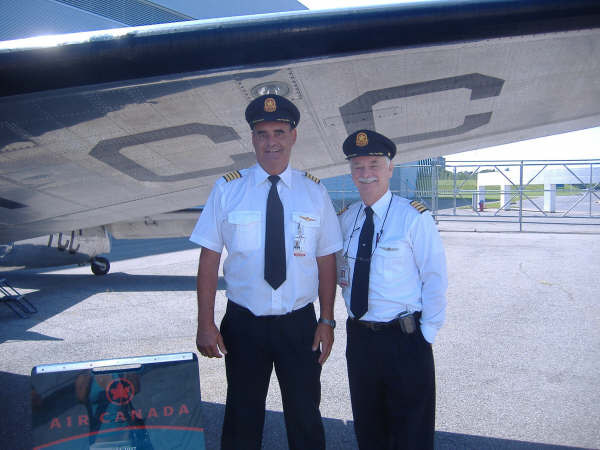 Captain Jim Mason, left, and Captain Harvey Reid are shown with the legendary Electra at Dulles International Airport at Washington DC in 2006, to attend the Airliners International Convention. (Photo courtesy of Jim Mason)
Jerry Vernon, president of the Vancouver CAHS chapter also has memories of TCC. “I’ve been fortunate enough to get two flights in CF-TCC,” he says. “Jim Jorgenson and I flew in TCC at Rockcliffe during one of the CAHS conventions years ago and then both of us also got a “media flight” in TCC one year at the Abbotsford Air Show. We were flying to the north of the Abbotsford Airport when all of a sudden there were skydivers in the air near us – the non-local pilots had not realized they had flown through the local skydiving club’s drop zone!” 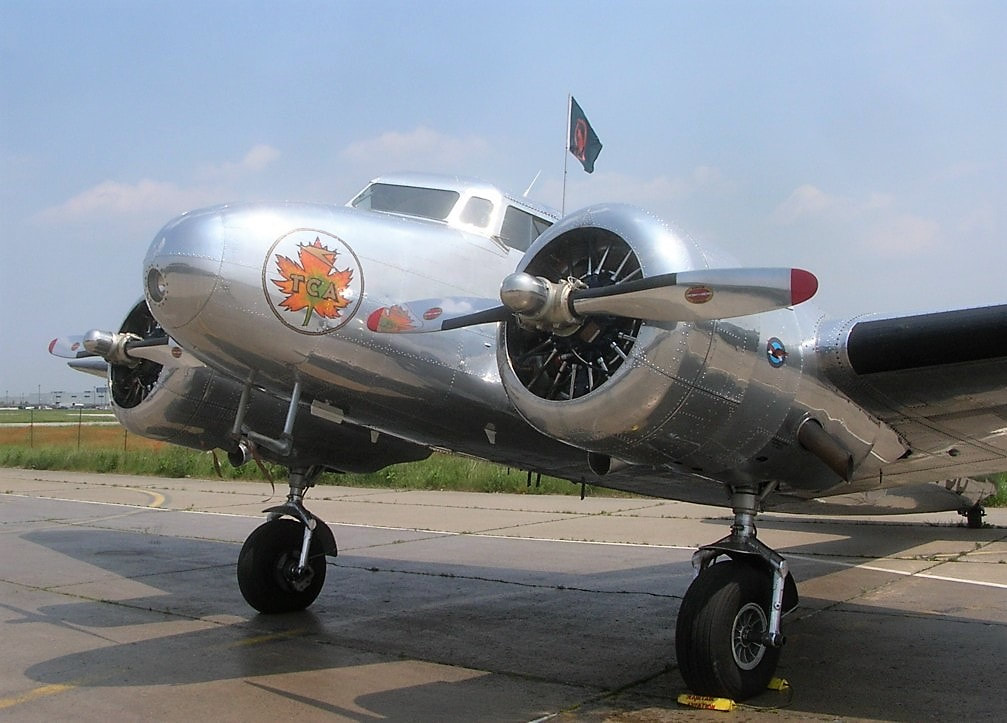 Even though Lockheed Electra 10A, CF-TCC, was in flying condition, she is now fully retired and has a permanent place in Canada’s newest aviation museum. A significantly important aircraft in Canadian aviation history she will wear her original Trans-Canada Airlines livery with pride, as shown here in 2007 at Downsview airport. It will not carry passengers again, but TCC will be seen by thousands of visitors who pass through the museum and learn of the Electra’s colourful history. (Chalmers photo)
To see an online story about yet another Lockheed Electra 10 that was restored and flown, check this one found on the internet at: Lockheed L.10A Electra N241M (ruudleeuw.com). That aircraft was restored in North America, then in May 2015 it was flown across the Atlantic to its new home at a museum in Prague, capital city of the Czech Republic.
Click Here to return to the articles page.