Story by John Chalmers,
CAHS Membership Secretary
posted December 2022
As reported in the August issue of our newsletter, the Calgary Mosquito Society was facing a serious problem in its restoration of the Mosquito owned by the City of Calgary. The aircraft is being rebuilt in the shop of the Bomber Command Museum of Canada at Nanton, Alberta, but was in need of more special plywood required to continue the project.

The supplier of the raw wood was in Russia, but the product was manufactured in Austria. With sanctions against Russia due to the war with Ukraine, supply of wood for the plywood became unavailable. Thus the search began for the Baltic Birch plywood that was made exactly like that  used to build de Havilland Mosquitos during the Second World War. Thirteen sheets, 1.5 x 3 meters, were needed and any substitute was not acceptable! 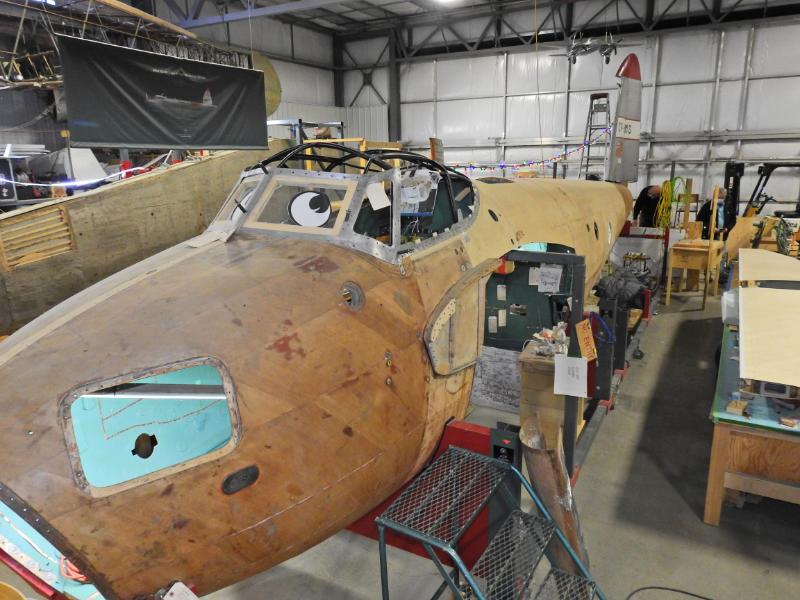 Under restoration now in its eleventh year, Calgary’s de Havilland Mosquito is seen in the shop at Nanton. Original and new wood can be seen in the nose and rear of the fuselage, respectively. (Richard de Boer photo)
However, the story now has a happy ending, as the necessary plywood was obtained through the help of fellow restorers in New Zealand! “Warren Denholm, owner of Avspecs in New Zealand, saw my post on Facebook about our plywood issues and he contacted me offering to help,” says Mosquito Society president and CAHS Calgary chapter president, Richard de Boer.

“Avspecs bought an unfinished Mosquito airframe when its owner had died, and thus had the fuselage moulds and plywood stock as well as good contact with the supplier,” says Richard. “Where we repeatedly got a 'no' from our plywood supplier in Austria, Warren got a 'yes' from them and ordered on our behalf.”  Fortunately the mill in Austria was able to locate another source of Baltic Birch to enable production. The required 13 sheets were then custom made to required specs and delivered October 5 to Nanton.

To celebrate the arrival of the plywood in Nanton, Richard declared the date to be “Hug Your Plywood Day!” He is shown here embracing the new supply of the plywood that was made to order. It will enable completion of the Mosquito, used primarily to replace skins on the wings, which had suffered from damage and weather when the aircraft had been previously displayed outdoors many years ago. 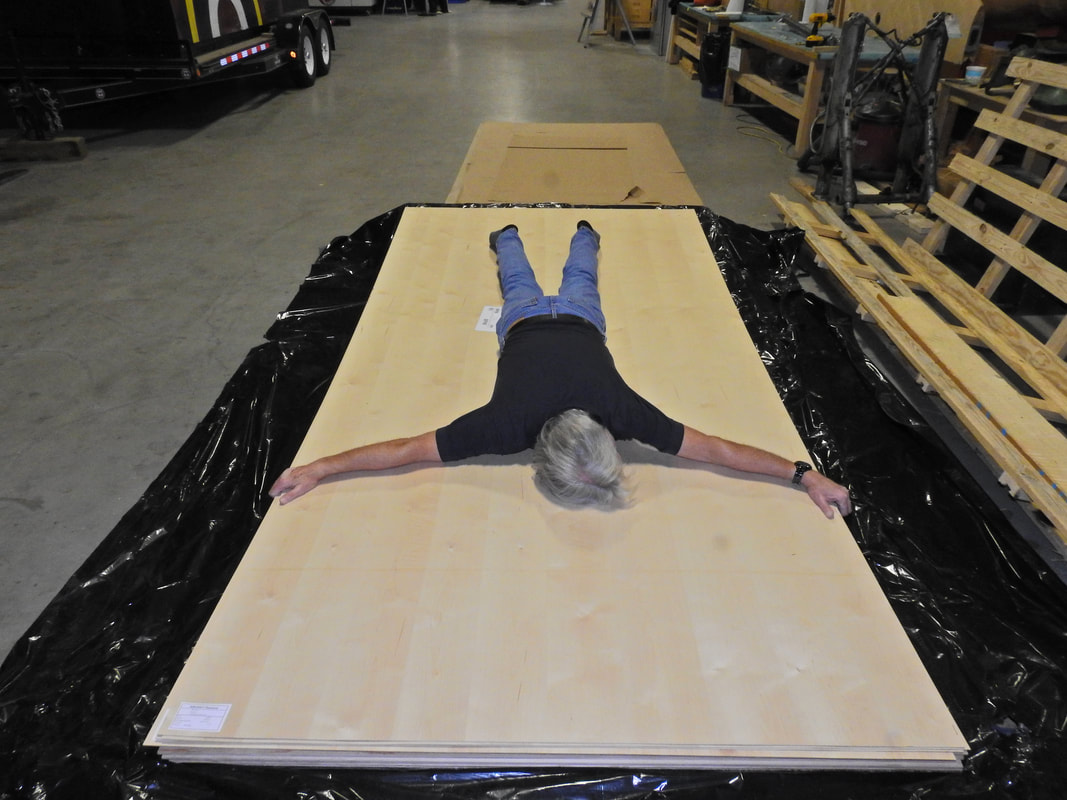 Richard de Boer hugging Baltic Birch plywood.
The situation faced by the Mosquito Society underlines the importance of those involved with aircraft restoration to keep in touch internationally with similar projects. Sourcing, selling and swapping components are practices that cross international borders.

“We maintain contacts with all of the other Mosquito restoration groups around the world and we have done swaps with a few of them,” says Richard. “Most are quite cooperative. Avspecs in New Zealand are great, and the De Havilland Aircraft Museum just out of London is also super to work with. It holds the prototype Mosquito, along with two other examples, and we have excellent supporters in their group.” 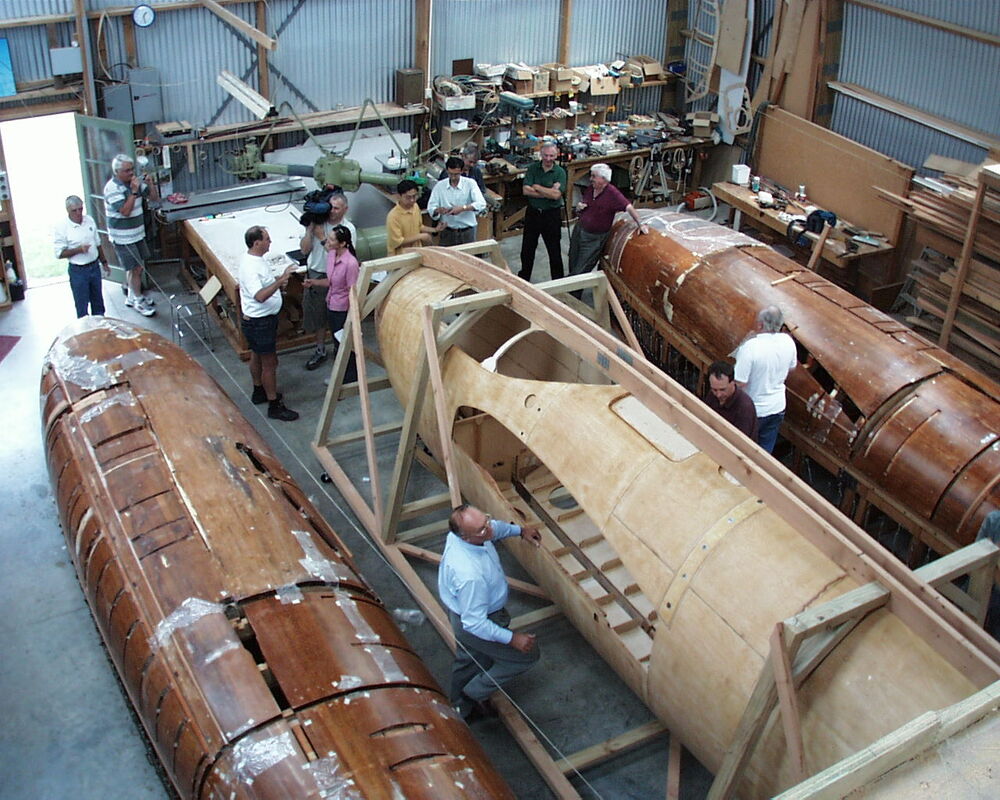 Shown here is a Mosquito being built in New Zealand under the direction of the late Glyn Powell. Upon his passing, the project was purchased by Avspecs Ltd. The wooden fuselage is seen between the moulds that are used to build the fuselage, which is made in halves, with each half being formed on a mould in layers of birch ply and balsa, then strapped until the glue is dry.  Once dry, the straps are removed and the two fuselage halves can be joined.  (Photo courtesy of  Warbird News)
Even though the cost of the plywood on this occasion was three times as much as the previous order eight years ago, that is unimportant when considering that restoration of the Mosquito is a priceless project on which a price tag can not be placed. 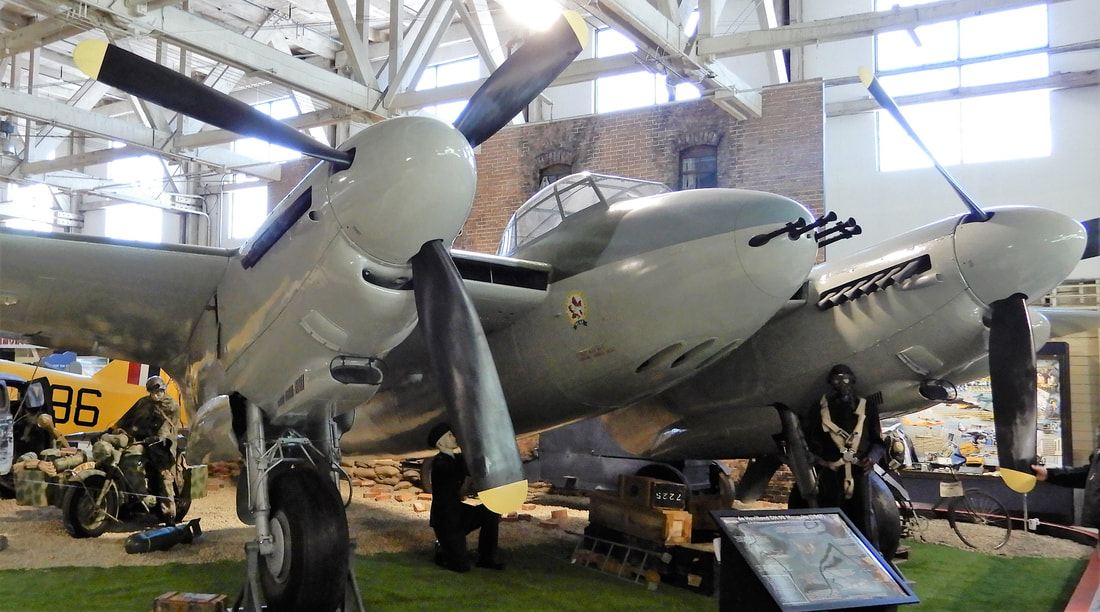 A restored de Havilland Mosquito at the Alberta Aviation Museum in Edmonton. When the one in Nanton is finished and located at The Hangar Flight Museum in Calgary, Alberta’s two largest cities will each have a “Wooden Wonder” on display. (by John Chalmers)
Click Here to return to the articles page.