Report and photos by Will Chabun,
Regina Chapter Newsletter Editor
posted November 2022
Emergencies at the airport when aircraft crash are no joke, and sometimes the best way to stay ready and prepared is to practice the scenario.

Two massive airport fire trucks, their diesel engines growling, pulled away from the fire station and headed towards the inky black smoke on the western horizon. Inside the station, eight members of the Regina chapter of the Canadian Aviation Historical Society watched– and sipped coffee.

Our time would come.

We were watching the start of Exercise Broken Arrow; a full-scale disaster exercise the Regina Airport is required to hold every two years. 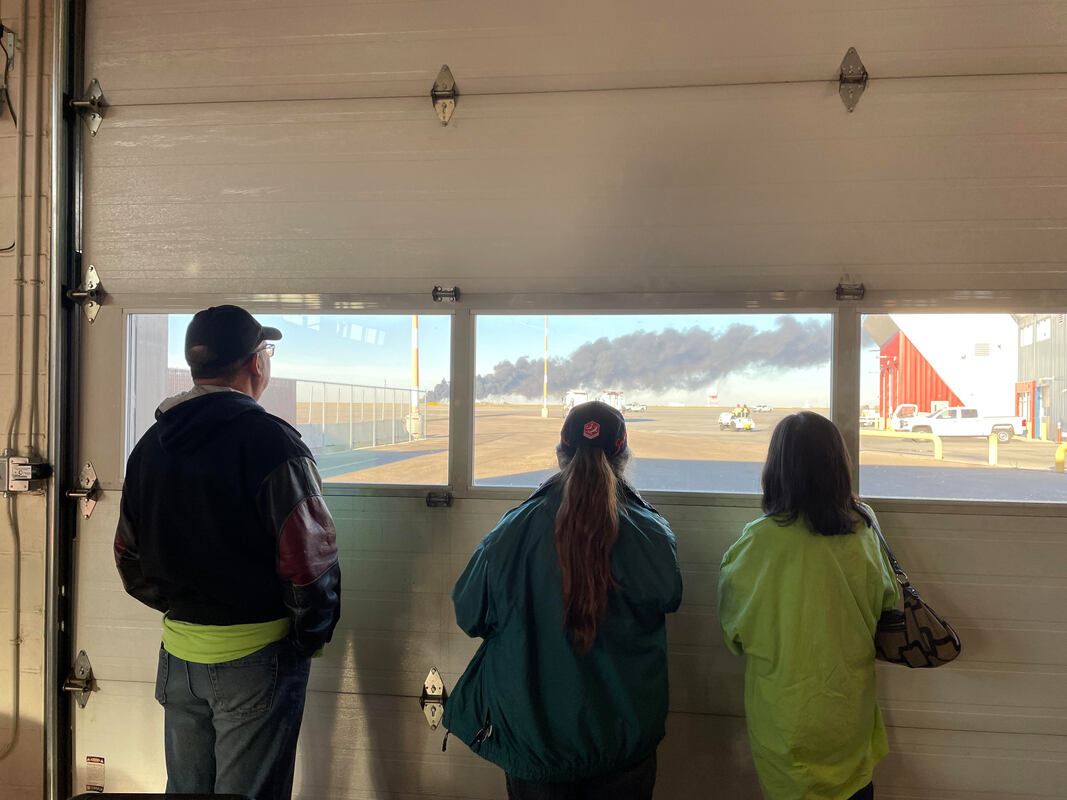 Exercise “actors” watch the plume of smoke that marked the opening of Exercise Broken Arrow.
The pre-exercise briefing on September 27 had packed the airport fire hall with personnel from the airport itself, Regina Fire and Protective Services, police, emergency medical services, airlines operating into the airport and even the Canada Border Services Agency.

And us. Nine members and friends of the Regina CAHS chapter. 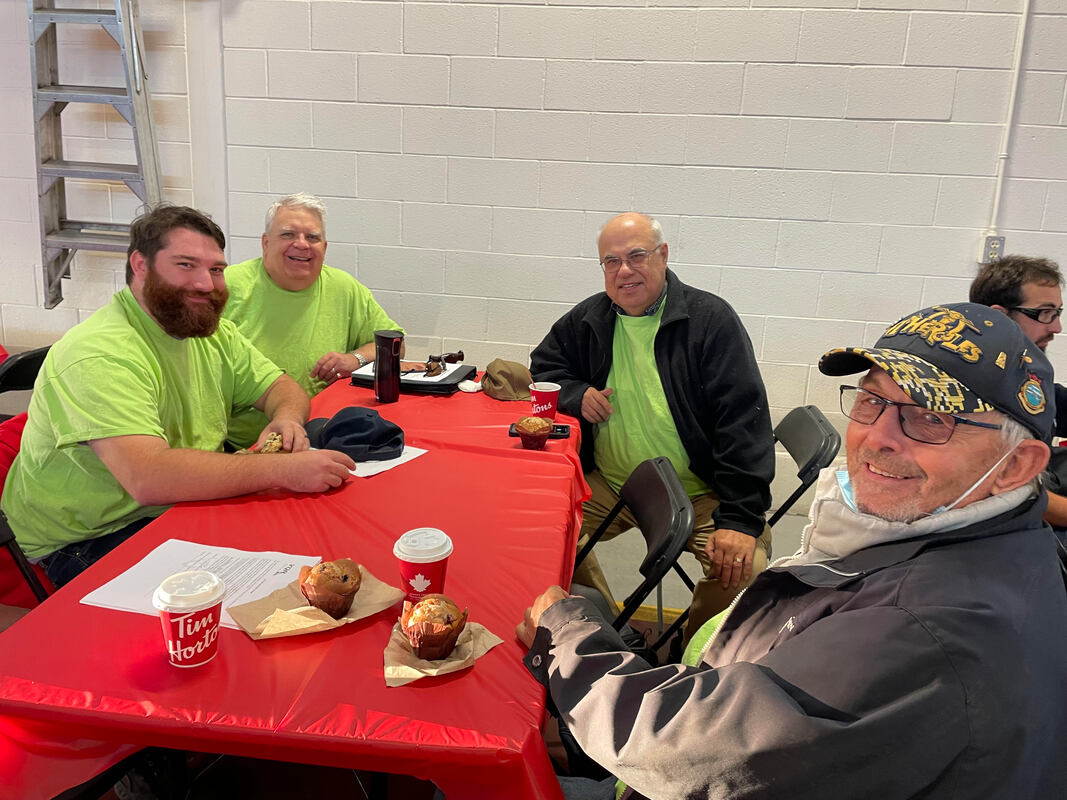 Getting ready for their acting debut are (L-R) Mason Wray, Gary Williams, Will Chabun and Gus Zelinski.
When chapter (and national) President Gary Williams encountered airport assistant fire chief Kelly Schwartz (who’d spoken to our chapter about his team’s work) back in June, Gary was quick to pledge a group of actors for the upcoming exercise.
The scenario: a chartered Beechcraft 1900 carrying passengers from the US enroute to hunting and fishing vacations has landed short of Runway 26. The aircraft has significant damage, and a small fire is growing on the port side. Emergency crews notice a rupture in the fuel lines and fuel visible on the ground.

We saw the “victims” a few minutes earlier in a suite of firehall offices. A team of make-up artists had given them simulated stains from smoke and scary red blotches. Their makeup session completed, they marched toward the bus taking them to the simulated crash site, “Have a nice flight!” quipped Schwartz.

The exercise scenario said most passengers had sustained noncritical injuries and had evacuated themselves from the scene. “However, some passengers are unable to evacuate the aircraft due to more serious injuries or because they are trapped”, the scenario adds. “There is panic and confusion and passengers are scattering, running in any direction they can to get away from the plane.”

With the firefighter, EMS and simulated casualties in place, it was time for us to become simulated friends and relatives, a good portion of them volunteers from the Regina chapter of the CAHS. We are marched over to the airport terminal building with vague instructions (“do not overact”) to simulate nervous and concerned family and friends.
When events lag, I ask Dolores Zelinski, CASARA veteran and wife of chapter member Gus Zelinski, if she can pretend to faint. This she does, tumbling like the proverbial sack o’ potatoes. And in a final burst of acting talent unused since my university days, I settle into an empty wheelchair and pretend to pass out.

Finally, somebody reports they’ve called a (simulated) ambulance. Nothing else happens until an RCMP member begins assessing my responsiveness and asking those around me about SAMPLE, the acronym familiar to those who’ve taken first aid courses -- symptoms, allergies, medication, past medical history, last oral intake and events leading up to this. Somewhere in the distance, I hear Gary Williams calling the airport information number for the umpteenth time and pleading for information.

Finally, we are reunited with our “relatives” – still in their medical make up, but smiling and excited. By now, it’s close to 11 AM. Back to the fire station for a quick debrief and, gosh, a round of applause for volunteer actors like us - plus a philosophical reminder of the “big picture” from the ever-smiling airport authority CEO, James Bogusz.

“What all of us are here to do is practice for something we hope will never happen. But if that happens, we stand ready.”