Doug served for 38 years as a pilot for Trans-Canada Airlines and Air Canada. He started on the DC-3 then advanced on almost every type including the Boeing 747 and the Lockheed L-1011. He retired on the 747 in 1989. An early member of the CAHS, Doug joined in 1963 and shared an enduring friendship with many CAHS members, notably George Fuller, the Montreal Chapter’s distinguished historian. ​ 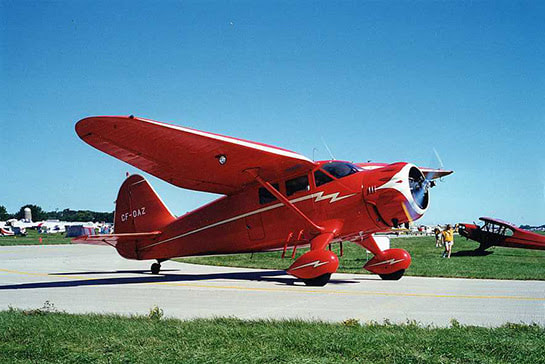 Doug Anderson's Stinson Reliant SR9E CF-0AZ was his pride and joy. (Doug Anderson photo)
Doug also flew a Stinson Reliant, CF-OAZ, Model SR9E (c/n 5258) that he acquired around 1985. George fondly recalled a five-day flight from Vancouver to Brampton, ON, in CF-OAZ with Doug in 1986. “It was like living a dream,” George remembered, with stops at Kamloops, BC, Springbank, AB, and Winnipeg en route. The scenery was majestic but George was more than a passenger.

The Reliant’s Wright Whirlwind engine threw up a lot of oil, so George used flannel pyjamas to serve as the “oil wiper” on the unforgettable trip.

Doug based the impressive red Stinson mainly in western Canada and flew it to air shows such as EAA Air Venture at Oshkosh and events at Colorado, Oregon, Washington and more. He eventually donated it to the B.C. Aviation Museum in Sydney.
CAHS Montreal and Ottawa Chapter member Diana Trafford recalled a few tales Doug used to tell about his days as an airline pilot.

“He liked to sing while he was in the cockpit and sometimes he would turn on the intercom to share his performances with the passengers. (He had a good voice!) And more than once when flying over the southwestern USA he would detour to give passengers an aerial view of the Grand Canyon. That must have been a long time ago, when routes were far less formal!”

As noted by Toronto Chapter President Sheldon Benner, Doug was known for his detailed drawings of the EDO floats used on the different bush planes. He was considered an “expert” on those drawings, which were rated better than the original manufacturer’s drawings. His drawings appeared in several issues of the CAHS Journal.

George noted the doors were always open for Doug at EDO. They were so impressed that they issued a special glossy publication featuring the Anderson drawings.

Diana also noted Doug’s habit of looking at car licence plates and recalling a matching aircraft registration. This would lead to a lengthy recounting of exact details about the particular aircraft, its history and the type generally.

“He also clearly remembered all the early aviation regulations, and if he looked through a pile of photos with you he would gleefully point out various infractions re lettering, advertising and so on,” Diana remembered. “He had a wonderful photo collection, small but choice.”

Doug participated in Toronto Chapter meetings when he was living north of Brampton while flying with Air Canada and was also an original member of the Montreal Chapter.
​
Described by George as “a master of his trade,” Doug was very courteous, an enthusiast who was keen to discuss aviation and CAHS activities. He enjoyed attending CAHS conventions. Sheldon recalled conversing with Doug at a convention in Winnipeg when attendees found him measuring floats for dimensions on a bush aircraft in the Western Canada Aviation Museum.
Doug is survived by his sons, Jim and Bruce. He was predeceased by his wife, Thelma, and daughter, Kathyrn. His friendly personality will be fondly remembered by all who knew him. We extend our condolences to his family.