Report and photos by Gord McNulty, CAHS Vice President
A Beech CT-134 Musketeer is now mounted as an aviation gateway to the village of Mount Hope thanks to a partnership with the Canadian Warplane Heritage Museum (CWHM) and the City of Hamilton. 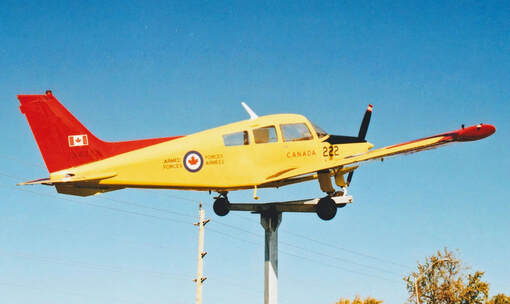 Staff and volunteers from the nearby museum delivered the freshly-restored Musketeer, formerly Canadian Armed Forces serial number 134222, with a police escort to its new home early in October. 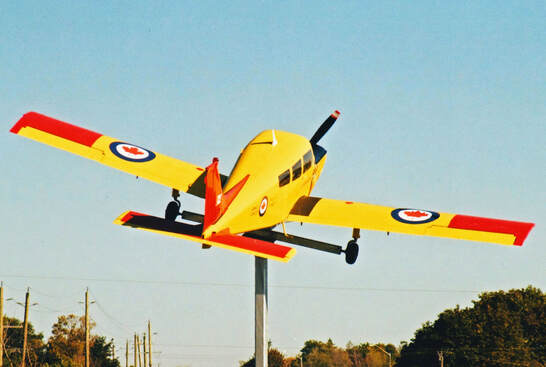 The freshly restored CT-134 Musketeer on display welcomes visitors to the village of Mount Hope and its rich aviation heritage​
The bright yellow trainer, positioned adjacent to busy Highway 6 at the Homestead Drive entrance to Mount Hope, provides a distinctive welcome for both residents and visitors. It highlights and salutes the rich aviation history of Mount Hope, dating to 1940 when RCAF Station Hamilton was established as one of the larger BCATP bases.

Musketeer #134222 was delivered to No. 3 Flying Training School at Portage la Prairie, Manitoba in 1982. It served there as a primary trainer before pilots transitioned to jets. Ten years later, it was retired from the Canadian Armed Forces and then dismantled and put into storage in Merrickville, Ontario. It sat there for years.

The CWHM acquired the aircraft in 2012 after discovering it for sale on Kijiji. It was restored to static display (i.e. not airworthy) condition in exact CAF markings for museum display. KF Aerospace assisted in refurbishing the Musketeer for the gateway project, which also includes final lighting that will be installed next year.

In early 1971 the new CAF had ordered 20 Musketeers to replace its Chipmunk primary trainers. The CWHM notes the aircraft were standard Beech model B23s, powered by a 180 hp Lycoming piston engine, but modified with the addition of a cowling strake, a horizontal stabilizer strake and a ventral fin to improve spin recovery.

The new trainers stayed in service until late 1981, when they were replaced by twenty-four 1982 model Beechcraft C23 Sundowners, designated as CT-123A Musketeer IIs. During 21 years of service, Musketeers trained about 5,000 Canadian military pilots.

They served with three CAF Flying Training Schools, and the Canadian Forces Flying Instructor School in Winnipeg. Musketeers were replaced in 1992 by Slingsby Fireflies, operated under contract by Bombardier Aerospace.

The Beech Aircraft Corporation designed the Musketeer in the early 1960s, with the first production aircraft taking flight in 1963. Eventually, 4,366 Musketeers were built in 15 variants, before production ceased in 1983.

Hamilton City Councillor Brenda Johnson, Mount Hope’s representative, thanked the CWHM and everyone involved for their generosity and effort.

“The Gateway is a spectacular vision beyond my expectations,” she stated. “What a wonderful entrance to the village and everyone of you should be proud of the results. We are getting lots of positive feedback from residents who have lived here for generations and those who have recently moved into the area. Simply put, thank you.”
Click Here to return to the articles page.