Catching up to Lancaster FM104 at BCAM

Story and photos by John Chalmers,
CAHS Membership Secretary
posted November 2022
A visit to Victoria BC late in October provided opportunity to visit again the British Columbia Aviation Museum (BCAM). My particular interest this time was to see Lancaster FM104, previously housed at the Toronto Aerospace Museum where it was undergoing restoration.

Following the decision in 2011 by a Crown Corporation to demolish the 1929 original de Havilland Aircraft of Canada factory building where the museum was located, the Toronto Aerospace Museum was evicted. Aircraft in the collection were then relocated to Edenvale Aerodrome airport, some 100 kilometres northwest of Toronto. The museum collection has since been rebranded as the Canadian Air and Space Conservancy.

I first saw Lancaster FM104 in Toronto in a visit to the aviation museum there in 2007. At that time, one of the volunteers working on the bomber was the late Philip Gray, who had served as a Lancaster pilot during the Second World War. Before leaving the museum, I bought a copy of his book, Ghosts of Targets Past: The Lives and Losses of a Lancaster crew in 1944-45.

It is a compelling read about his experience as a pilot trainee and as a Lancaster bomber pilot with his closely-knit crew. He and all his crew survived the war in dangerous conditions such as one of 1,054 bombers flying in their tenth operation in a bombing raid on Essen, Germany. Phil and his crew completed 16 operations.
Born in Scotland in 1922, Philip Gray started combat flying as a Sergeant pilot, rising to the rank of Flight Lieutenant by the end of the war, having completed 16 missions as a Lancaster pilot with the Royal Air Force. In 1953-54 with the 2nd Tactical Air Force in Germany he served as a tow pilot for firing ranges. Later he acquired a private pilot’s licence which he maintained until 1989. After living in New Zealand after the war, he moved to Canada in 1990, and died at his home in Etobicoke, Ontario, in 2013. He wrote his personal account of wartime service, Ghosts of Targets Past, while in New Zealand and had it published while he was living in Canada.
Prior to being moved to the Toronto Aerospace Museum in 1999, FM104 had been mounted on a plinth and displayed outdoors in Toronto for 34 years. As is often the case with aircraft displayed outdoors for decades, weather, vandalism and exposure took their toll on the warbird. In 2018, the City of Toronto deaccessioned the 1944 Canadian-built Lanc and approved relocation of it to the British Columbia Aviation Museum to be restored. Dismantled and moved with five trucks to its new location in 2018, restoration of the bomber began anew. 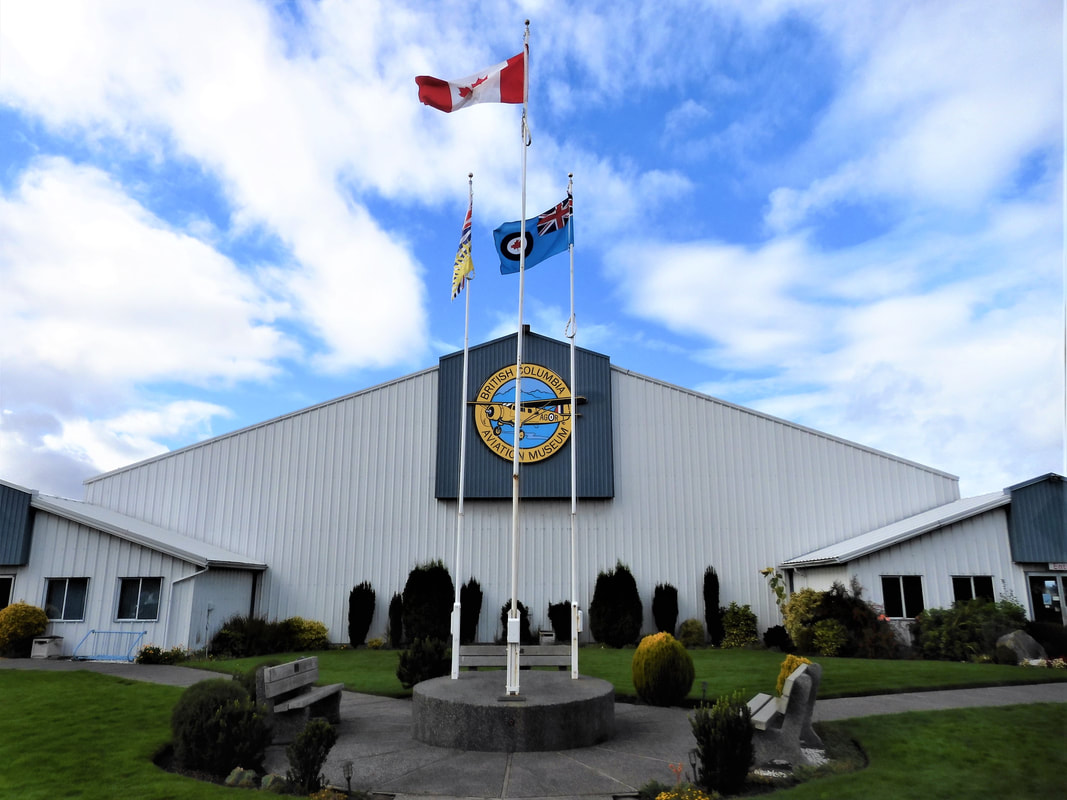 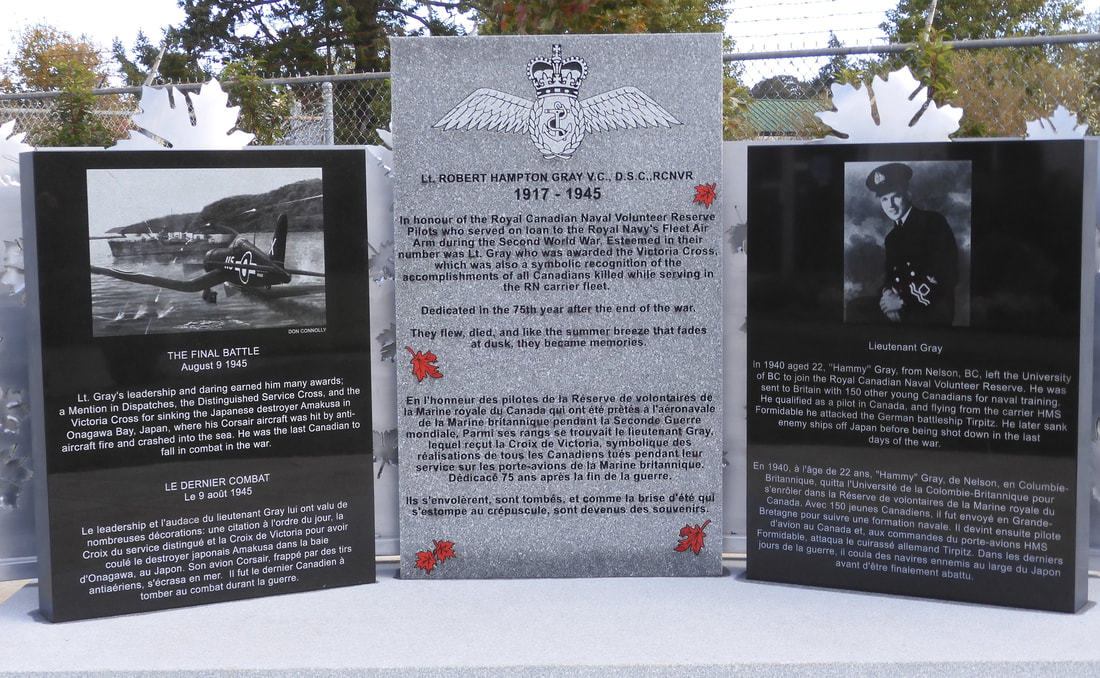 In front of the museum is a memorial to Lt Robert Hampton Gray, VC, DSC, born in Trail BC. A pilot of the Royal Canadian Navy, he was the last Canadian killed in action in the Second World War, while attacking a Japanese warship with his Corsair, earning his Victoria Cross for that effort. 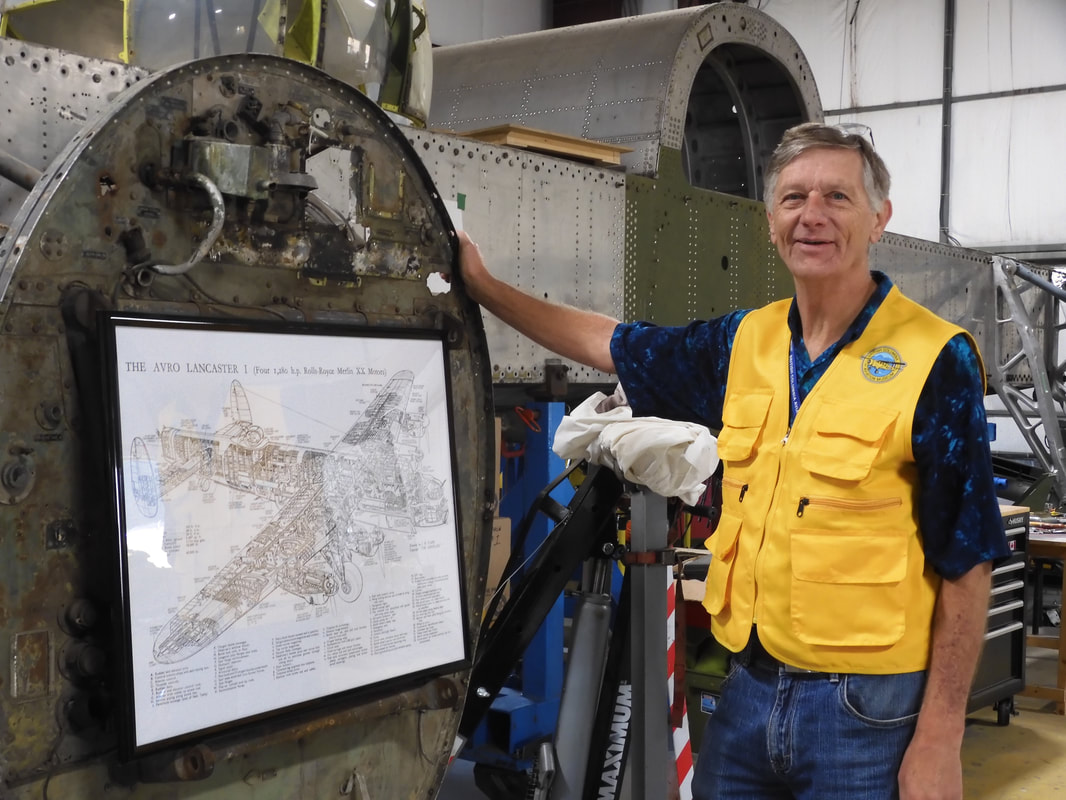 Chris Stewart, a retired AME who spends two days a week at the museum as a tour guide and working on the Lanc’s restoration, served as guide for a full tour of the facility. He is seen here by an engine firewall at the aircraft’s wing centre section. Four Merlin V-12 liquid cooled engines were used to power the Lancaster. 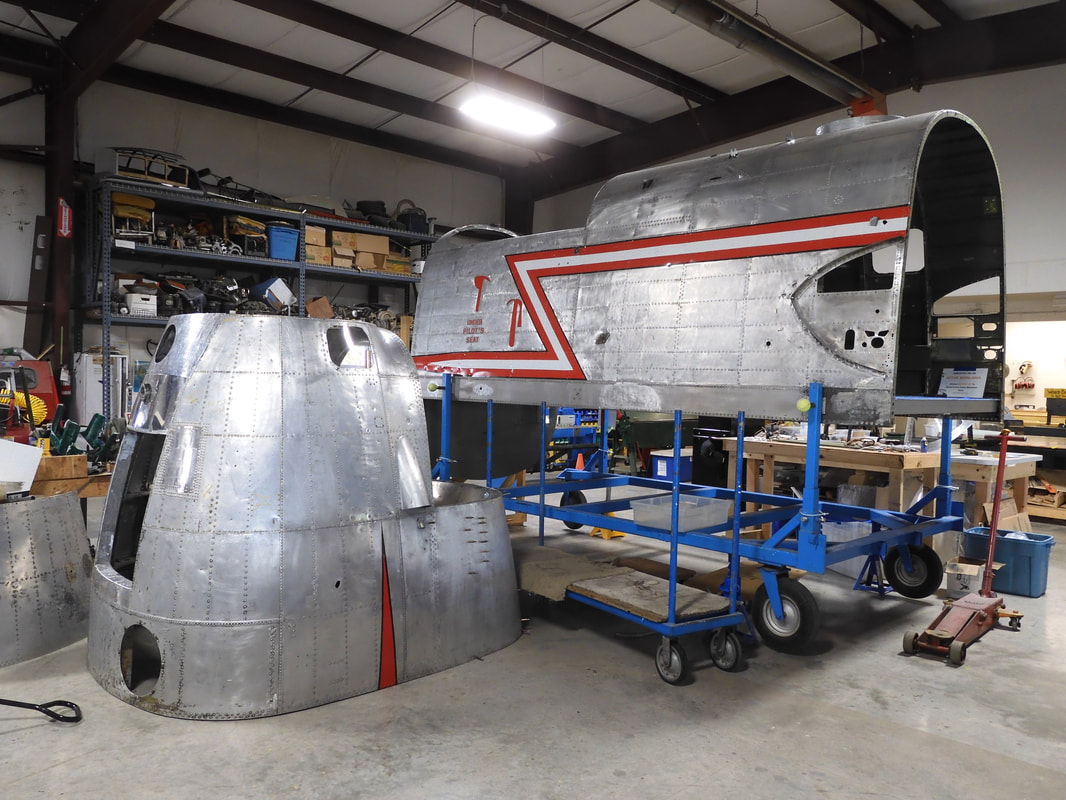 Shown above are front sections of the fuselage in the museum’s restoration shop. 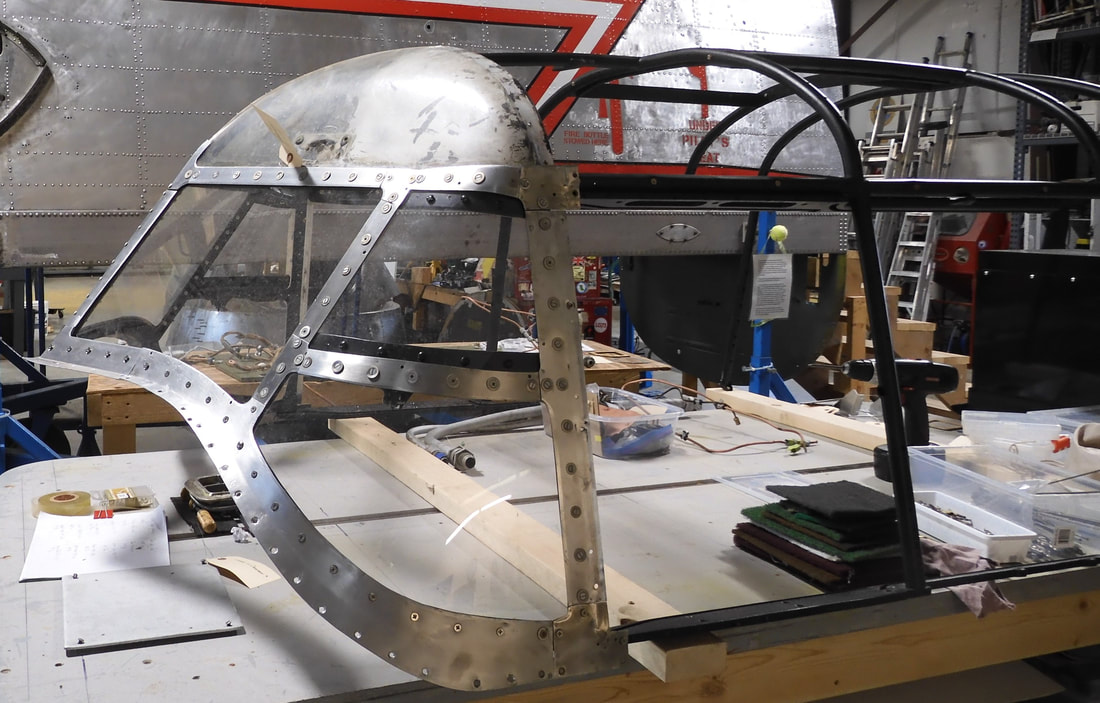 Above, the cockpit cover is under restoration, being prepared for installation of the plexiglass components. Like many aircraft in Canadian museums, restoration is being done by skilled volunteers in a  multi-year project. 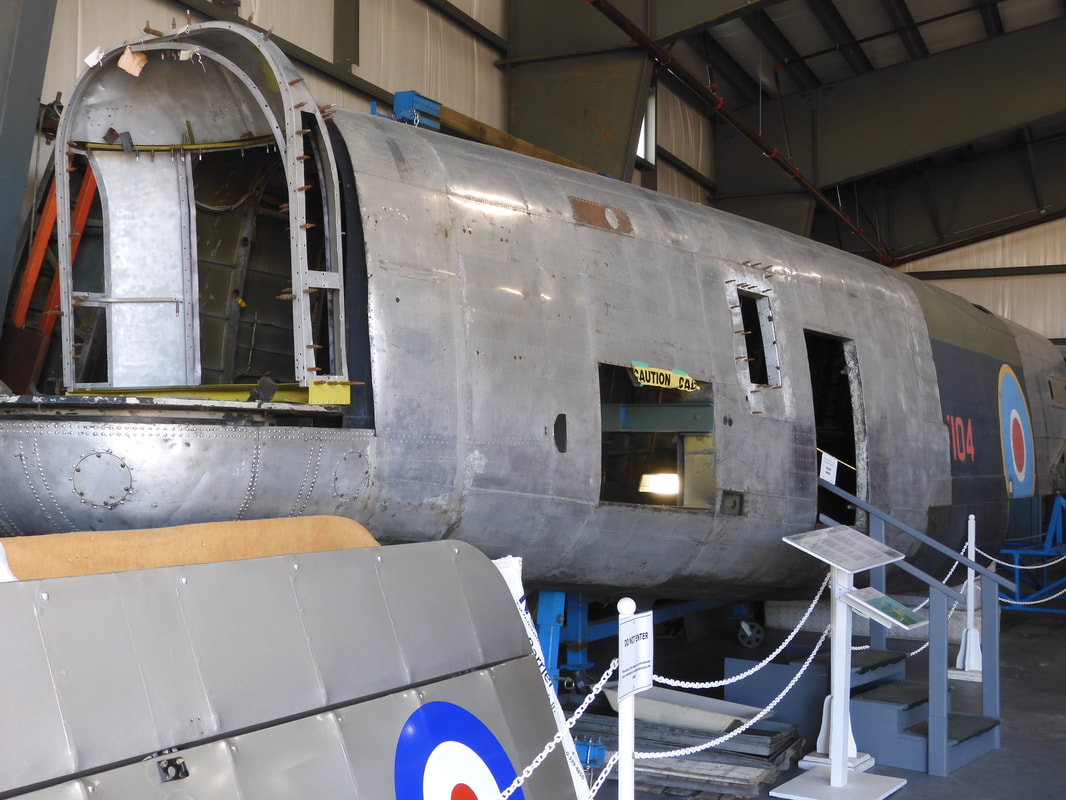 Rear turret and rear fuselage of Lancaster LM104
Whether the Lanc will be restored to flying condition or to static display remains to be seen. The aircraft will be restored to its post-war appearance when it flew with Maritime Air Command for nearly 20 years. BCAM has posted several videos about the Lancaster and its restoration progress, which can be found in an internet search. An excellent video can be seen when you click here for history of the bomber or click here for a progress report after it was moved to BCAM.

Several areas at BCAM are dedicated to particular types of aircraft, including Early Birds, Homebuilts, Bushplanes, Warbirds of two World Wars, Helicopters, and various aircraft of post-war periods. Models, displays and engines are part of the museum’s collection of more than 30 aircraft. The museum, established in 1988 now comprises three buildings located on the site of the wartime Patricia Bay air base. See more at the museum’s web site when you click here. 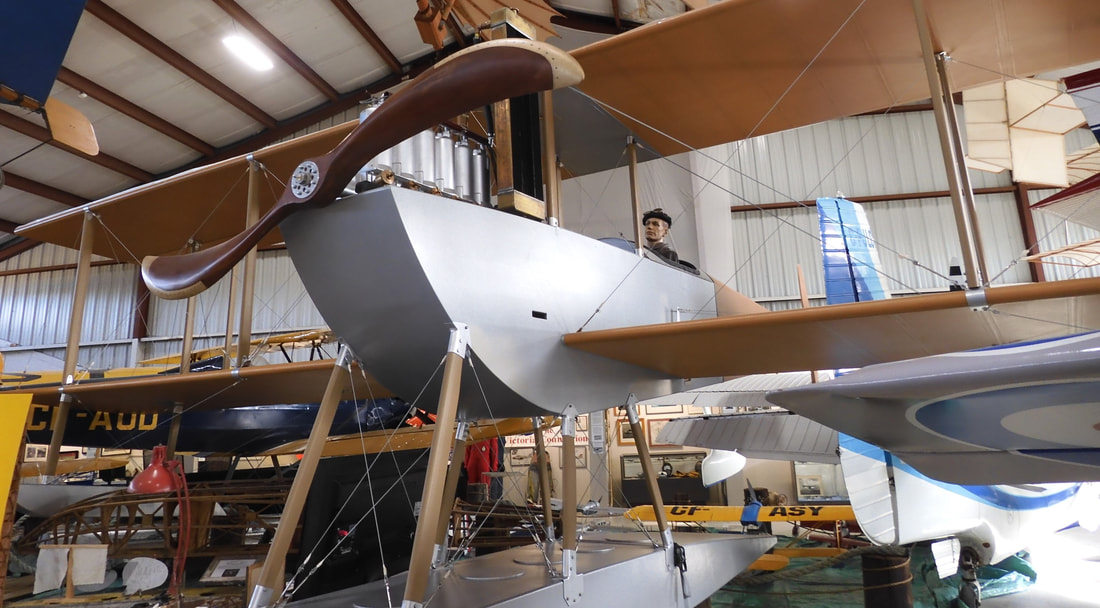 You won’t see one of these aircraft, above, anywhere else! It is an accurate replica of a unique British Columbia aircraft, a Hoffer H-1, designed and built by brothers Henry and Jimmie Hoffer, in 1917 in British Columbia, the first Canadian aircraft with a single float. 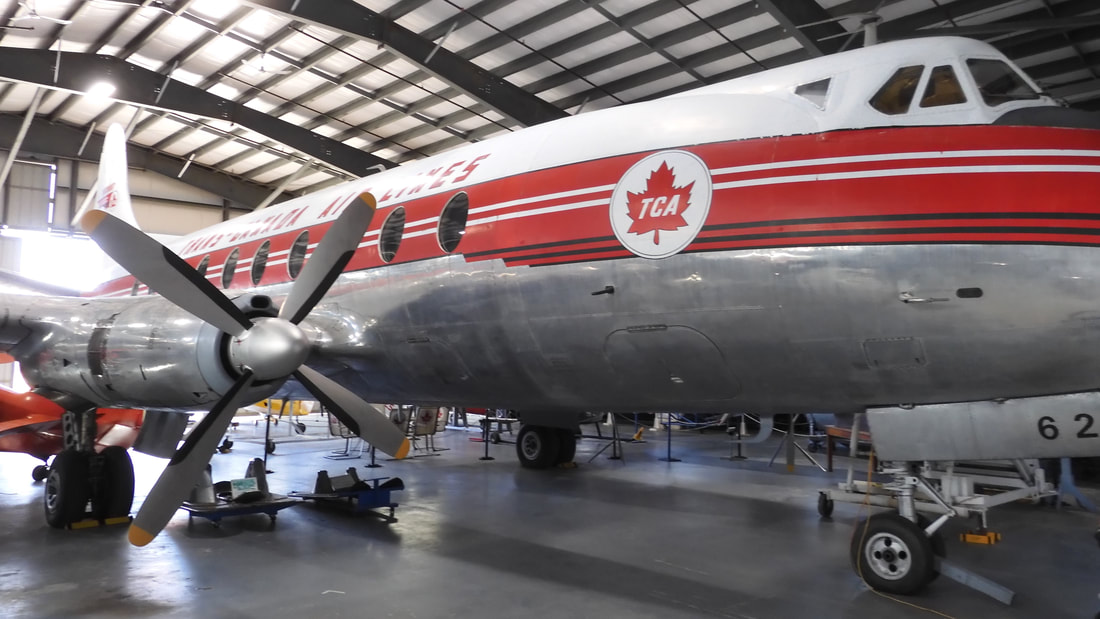 Largest aircraft in the BCAM hangar is the Vickers Viscount that flew for Trans-Canada Airlines from 1957 to 1974, then was owned briefly by Harrison Airways, used for instruction at BC Institute of Technology, then ultimately acquired by BCAM and restored. 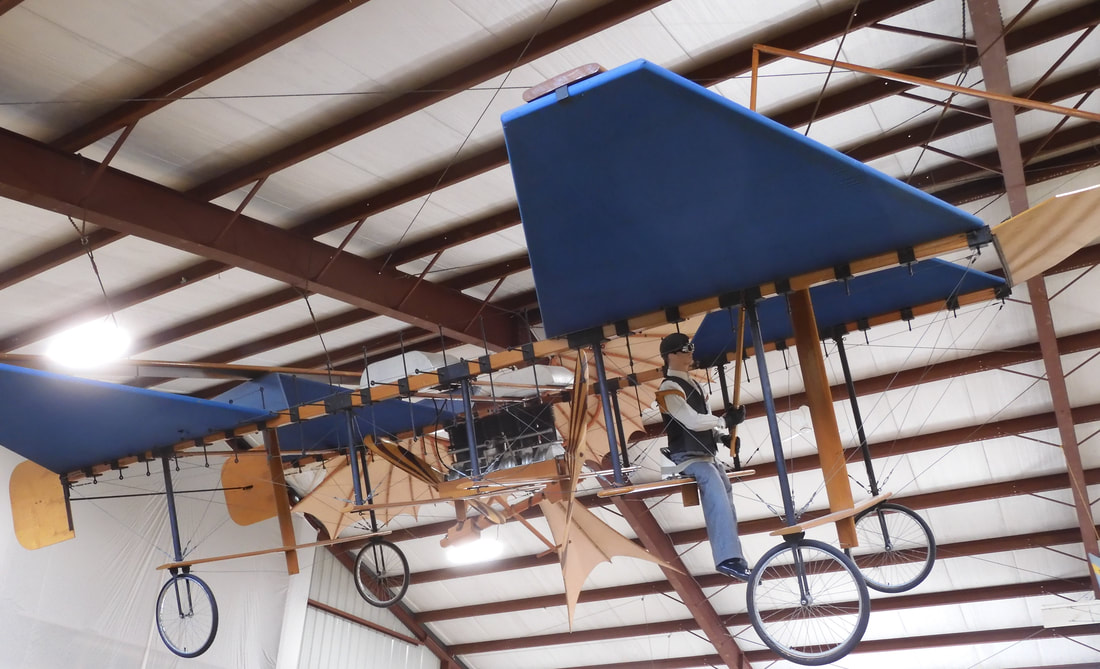 A tribute to early aviation in British Columbia is the replica of the Gibson Twin-Plane, designed and built by William Wallace Gibson in 1910, who also built its six-cylinder two-cycle air cooled engine that powered pusher and a puller propellers. Its original and unique engine is housed in the Canada Aviation and Space Museum in Ottawa. 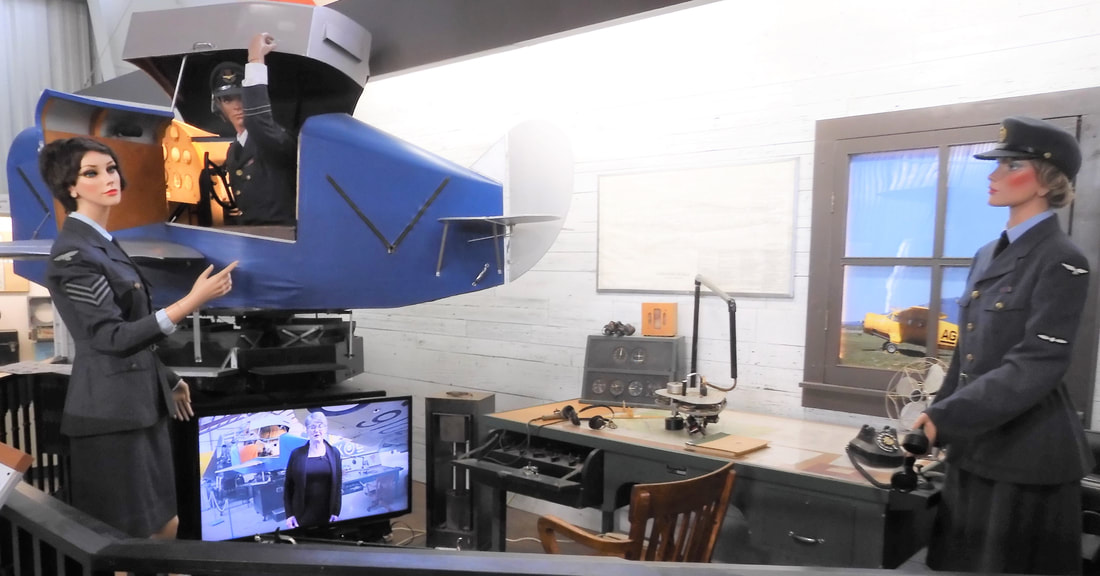 An excellent Link Trainer display features the Trainer itself, the instructor desk with the “crab” used to plot flights, women RCAF instructors, signage, and a video about that early flight simulator widely used at BCATP bases across Canada during the Second World War. 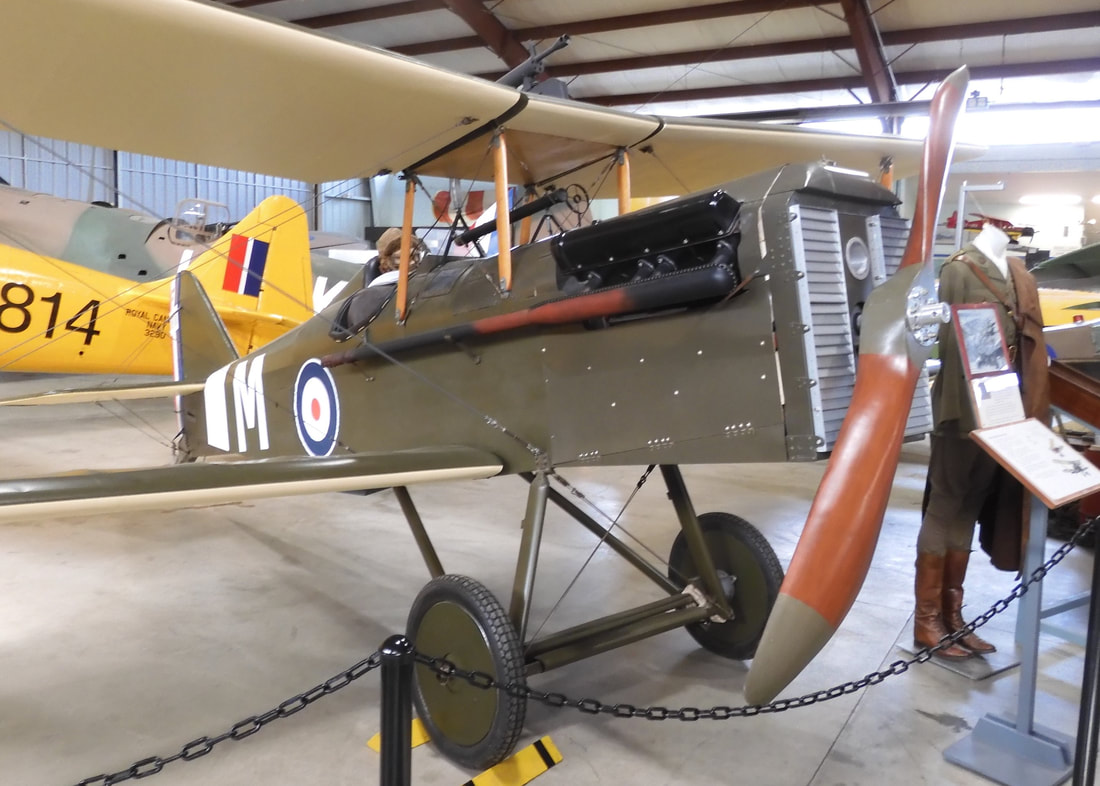 The 7/8 scale replica Royal Aircraft Factory SE5A scout and fighter aircraft of the First World War was donated to the museum when retired from flying. At a time when many aircraft in the war were powered by an air cooled rotary engine, the SE5A used a liquid cooled V8. 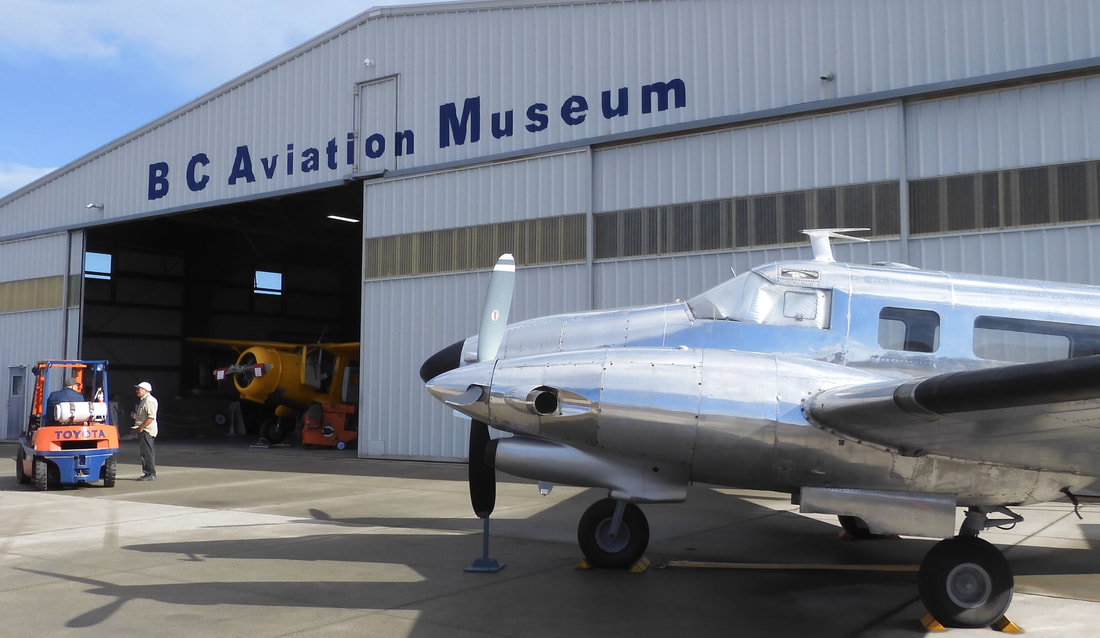 The museum’s main hangar rear doors open to a plaza where the Westwind IV at right is displayed along with a Convair 580 water bomber and a Douglas A26 Invader converted to water bomber, both donated by Conair. Seen in the doorway is the nose of the museum’s Noorduyn Norseman.
Ed. note: Writer/photographer John Chalmers has posted 55 photos from BCAM, which can be seen when you click here.
Click Here to return to the articles page.