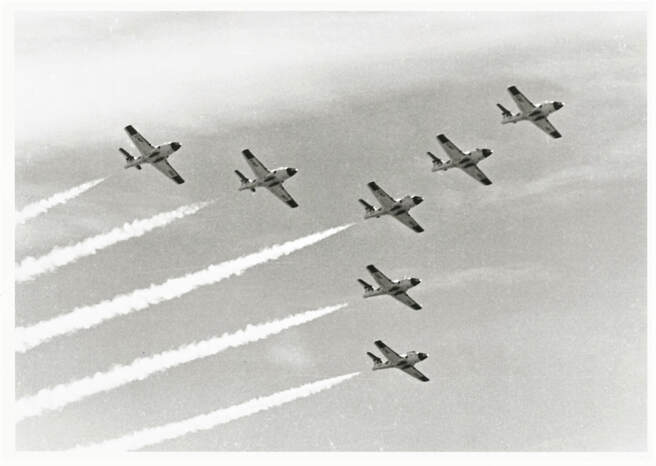 Led by Major Glen Younghusband, the Snowbirds formation demonstration that afternoon was the first major airshow performance of approximately 2,700 official airshows the team has now flown over the last 50 years across North America. Hundreds more flypasts have also been flown, including those flown last year and this year under "Operation Inspiration." And proudly watching from the ground that day was the team's founder, CFB Moose Jaw Base Commander Colonel O.B. Philp, along with the Commander of Training Command, Major-General Bill Carr. Major-General Carr’s opening address was immediately followed by a thunderous flypast of a combined eight-ship of CF-104s and CF-5s from CFB Cold Lake – and the show was on!​
​So a toast to the vision and perseverance of Canada’s Aviation Hall of Fame member Colonel O.B. Philp, the 11 volunteer instructors who flew on the Snowbirds that first season, and the group of BAMEO technicians who supported them during their workups in Moose Jaw. They paved the way for the expansion of the team to nine jets in 1972 and the awarding of squadron status as 431 (Air Demonstration) Squadron on April 1, 1978.
The 1971 team members were:

As we salute the 1971 team, we extend our congratulations and best wishes to the 2021 Snowbirds who are carrying on the tradition of excellence under the challenging COVID-19 restrictions of this summer. Notwithstanding, one only needs follow social media posts to appreciate how excited Canadians are to see the team back in the air again.
​
The Snowbirds were awarded the Art Scholl Memorial Showmanship Award by the International Council of Air Shows in 1987 in Las Vegas and the Belt of Orion Award for Excellence by Canada’s Aviation Hall of Fame in 1994 in Edmonton.

Sic Itur ad Astra
Dan Dempsey is a former commanding officer and team leader of the Snowbirds and was a demonstration pilot on the Vintage Wings of Canada “Hawk One” F-86 Sabre restored in Golden Hawk livery from 2009-2012 in celebration of the 100th anniversary of powered flight in Canada. He retired from defence contractor Top Aces in December 2020 bringing to a close his 46-year career as a jet pilot. He is the author of “A Tradition of Excellence – Canada’s Airshow Team Heritage” which chronicles the history of Canada’s military airshow teams. (http://www.canadasairshowheritage.com/)
Click Here to return to the articles page.