Story and photos by John Chalmers,
CAHS Membership Secretary
posted May 2022
When was the last time a Canadian aviation museum was opened in a brand-new building? The Canada Aviation and Space Museum in Ottawa in 1960? The Canadian Warplane Heritage Museum in Hamilton, celebrating its 50th Anniversary this year? The Western Development Museum in Moose Jaw? The Bomber Command Museum in Nanton?

The answer is the Royal Aviation Museum of Western Canada in Winnipeg! Its grand opening, an invitational event attended by 250 aviation enthusiasts, was on May 19, opening to the public on the May 2022 long weekend. Located on four acres at the James A. Richardson International Airport in Winnipeg, you can’t miss it, as all vehicles leaving the airport pass right by the museum’s front door. 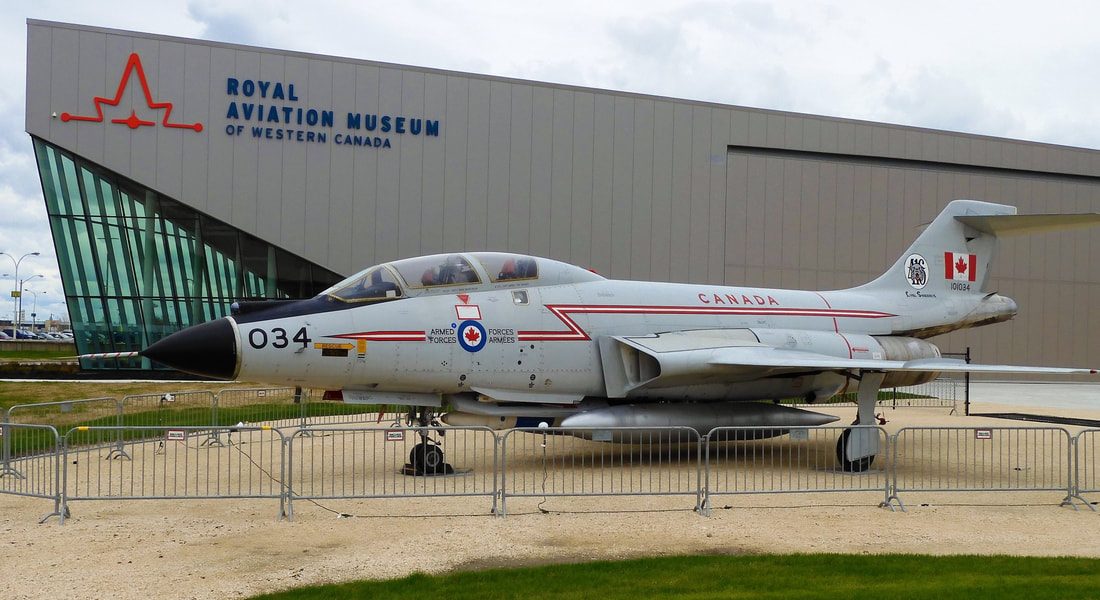 The first aircraft to be seen at the new Royal Aviation Museum of Western Canada is a McDonnell F-101 Voodoo, one of many aircraft at the museum that was flown by the RCAF.
All speakers at the opening ceremonies praised the work done in fund raising, architecture, volunteer work and support of the Winnipeg community in creating the museum. As city councillor Scott Gillingham said,” The opening of the museum marks the culmination of planning and dreaming that saw a dream turned into reality.”

Each participant in the ribbon cutting ceremony to officially open the museum had a pair of scissors and was able to cut and save a piece of the ribbon as a souvenir! Left to right are  Hartley Richardson, President of the Richardson Foundation; Blain King and Ross Robinson, co-chairs of the Climb Aboard! fund raising campaign; Niigan Sinclair, the museum’s Indigenous Curator and a Native Studies professor at the University of Manitoba ; Bruce Emberley, museum board chairman; Raif Richardson of the Richardson Foundation; Terry Slobodian, President and CEO of the museum; Andrew Smith, representing the Government of Manitoba; Lieutenant Governor Janice Filmon; Brian Bowman, mayor of Winnipeg.
Raif Richardson, a great-grandson of pioneer pilot James A. Richardson, for whom the Winnipeg airport is named, pointed out that four million passengers per year coming to the Winnipeg airport will pass by the museum. “The museum is one of the first things visitors will see when they arrive in Winnipeg,” said Winnipeg mayor, Brian Bowman, and described it as “an inspiring source of pride.”

A new museum became necessary when its predecessor, originally named the Western Canada Aviation Museum and established in 1974, lost its home in October 1984 when it was located in a hangar formerly used by Trans-Canada Airlines. The hangar has since been demolished to make way for new commercial uses. The aircraft, archives and artifacts of the museum had to be dispersed to other locations for storage. But in less than four years a totally new building was designed, funded, built and opened. 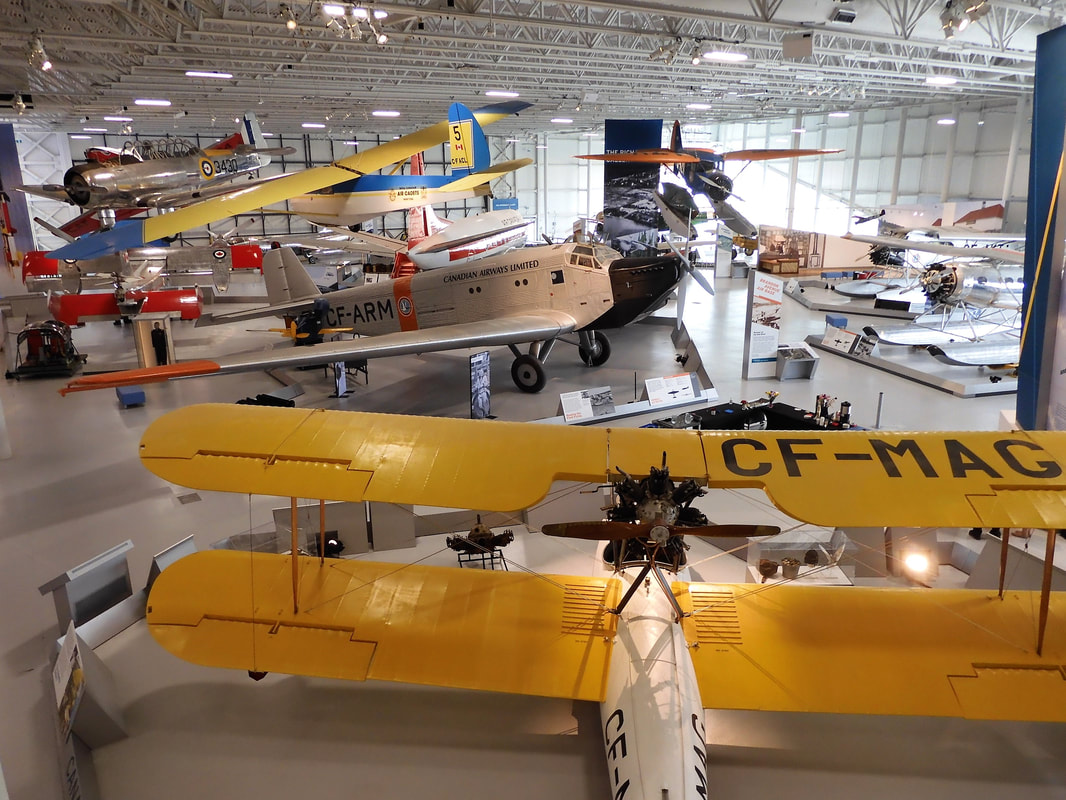 An overall view of the museum from the mezzanine floor that houses meeting rooms, the education centre and displays. In the foreground is an exact replica of a 1924 Vickers Vedette flying boat, built over a period of 22 years by museum volunteers at the former location of the museum. At centre is a Junkers Ju-52, the largest single engine aircraft to operate on floats and skis.
The new museum is 86,000 square feet and construction began on April 27, 2020. In spite of supply and delivery problems during the Covid pandemic over the past two years, the museum was completed six weeks ahead of schedule and a million dollars under budget.

Highly successful fund raising over the past four years has paid for the facility, and rent won’t be a problem. The property on which the museum stands is leased from the Winnipeg Airports Authority at a cost of one dollar per year for the next 56 years. 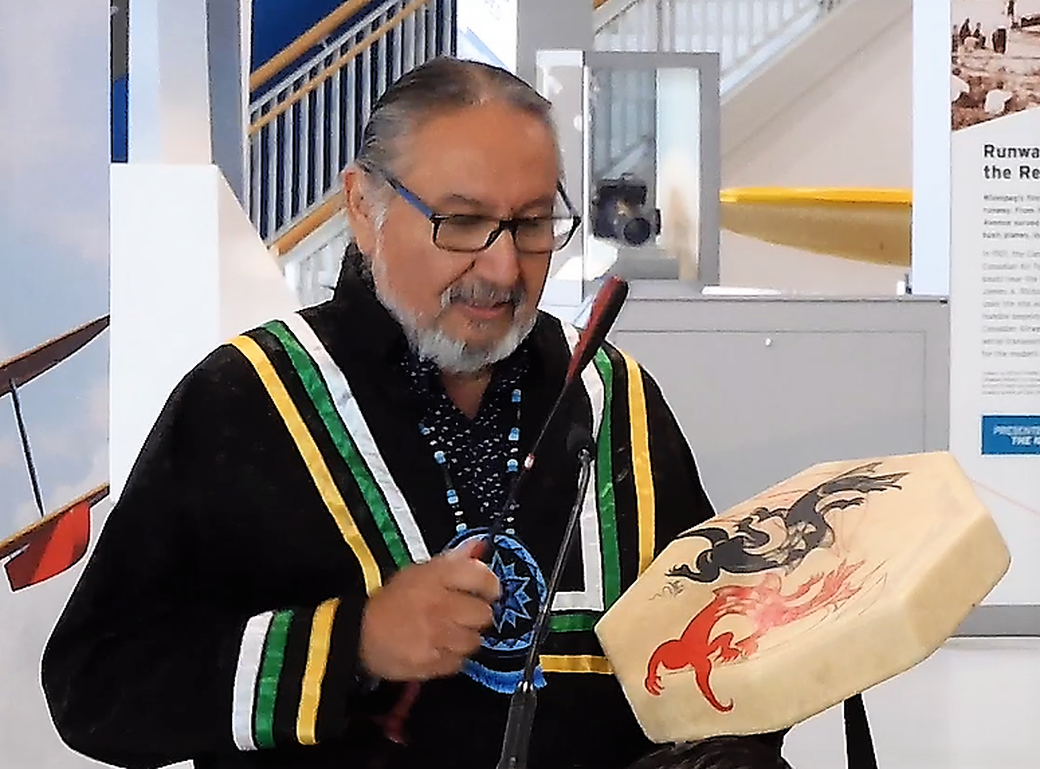 A special moment during the comments by speakers at the opening ceremonies was provided by elder Carl Stone of the Brokenhead Ojibway Nation. He spoke of his grandmother, born in 1880, who told him that she envisioned “silver birds” with long tails flying overhead, a dream that foretold the future. Then while beating his drum, he concluded by singing a song in his native language that gave thanks for all the good things we have in our lives.
Aircraft in the museum are representative of pioneer aviators like James A. Richardson, bush pilots, commercial aviation and military aviation of the Royal Canadian Air Force. Twenty-four aircraft are displayed in the museum, of which six are suspended from the ceiling in flight. Interpretive signs for all aircraft provide informative details for visitors. Not all aircraft in the collection are at the museum. Others are stored just north of Winnipeg in the museum’s location at St. Andrews Airport, and at the Restoration Facility in Winnipeg. 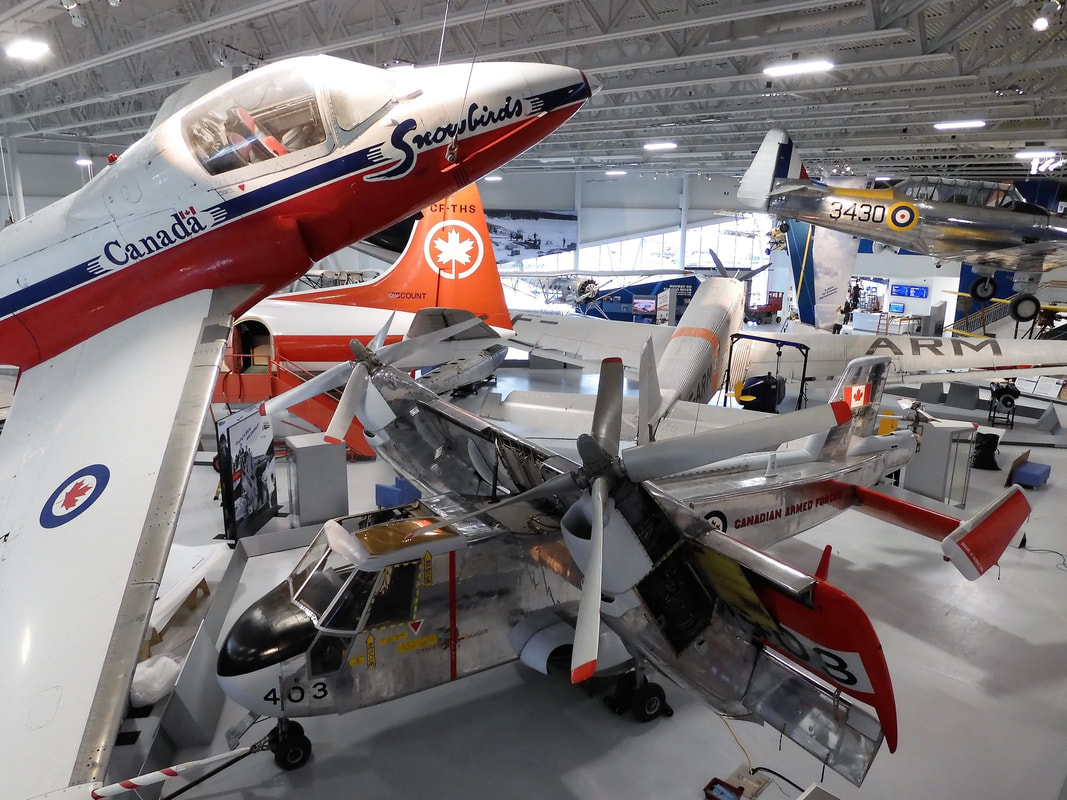 Three of the aircraft in the museum’s collection flown by the RCAF are seen here. At left, a suspended Snowbirds Canadair Tutor flies over a Canadair tilt-wing CL-84 Dynavert, designed for vertical takeoff and landing, one of only four ever built. At upper right is a North American Yale used for pilot training in the British Commonwealth Air Training Program during the Second World War. The Yale is a retired movie performer that was featured in the classic 1942 movie, Captains of the Clouds, starring James Cagney as a Canadian wartime pilot.
In his remarks at the opening ceremonies, museum board chairman Bruce Emberley singled out and praised Terry Slobodian for his “long days, late nights and early morning starts” on behalf of the museum. Emberley concluded his remarks at the opening ceremonies by saying that, “I’ve waited for four years to say, ‘Welcome to the new Royal Aviation Museum of Western Canada!” 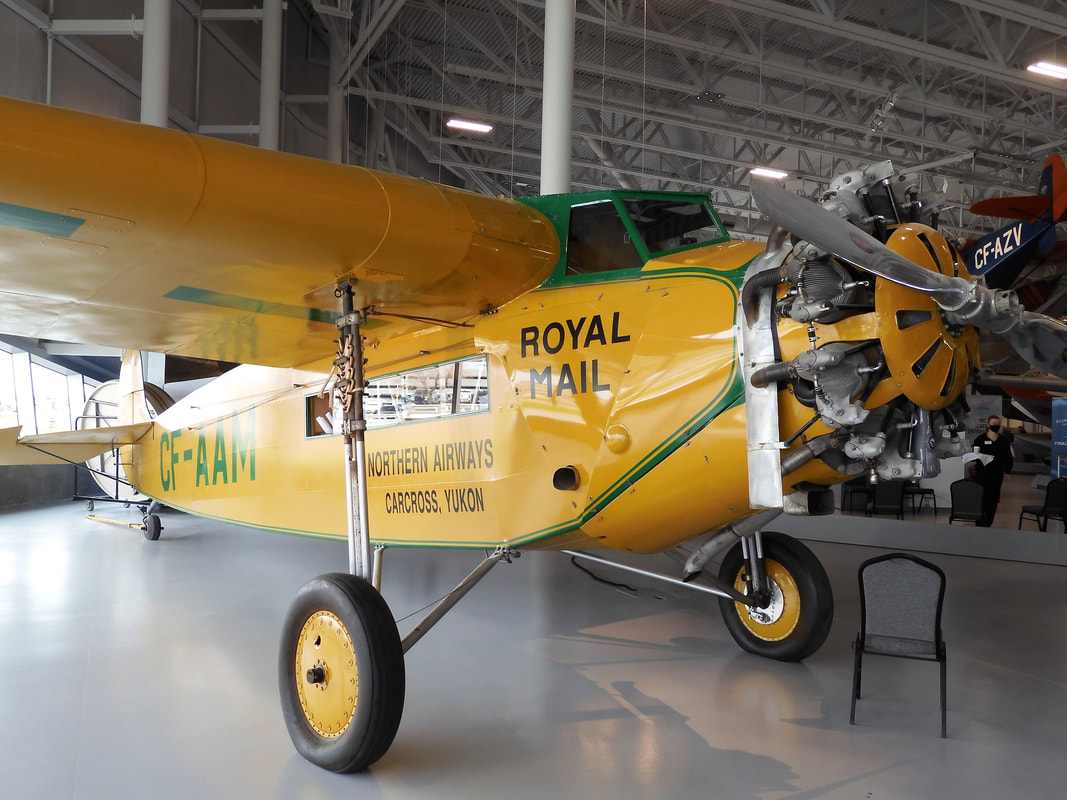 This 1929 Fokker Super Universal was built from four wrecks by long-time CAHS member, Clark Seaborn. Flown by Clark in long re-enactment flights, the aircraft was then retired and placed in the museum’s collection.

Largest aircraft in the museum is the four-engined Vickers Viscount, an airliner first flown in 1948. Open to visitors, stairways allow access to walk through the aircraft. 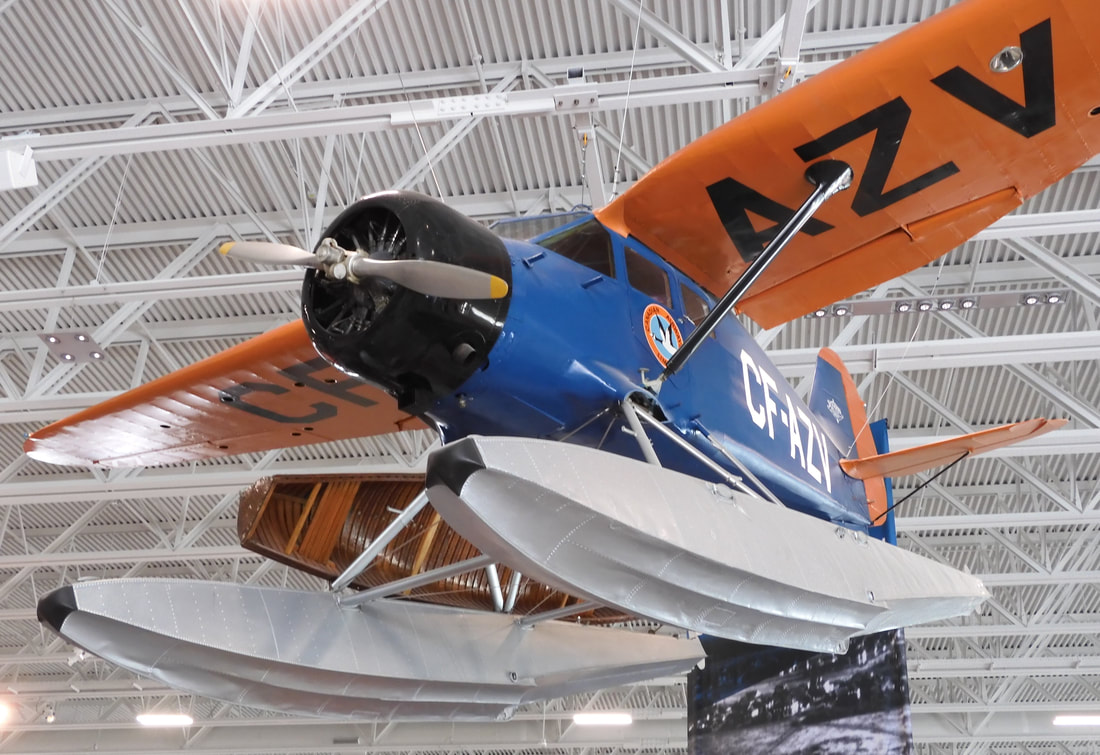 A classic bushplane, this 1936 Stinson Reliant is a type flown by a number of airlines. This particular one flew with James Richardson’s Canadian Airways Ltd. and later with other Manitoba air services until retired in 1964. 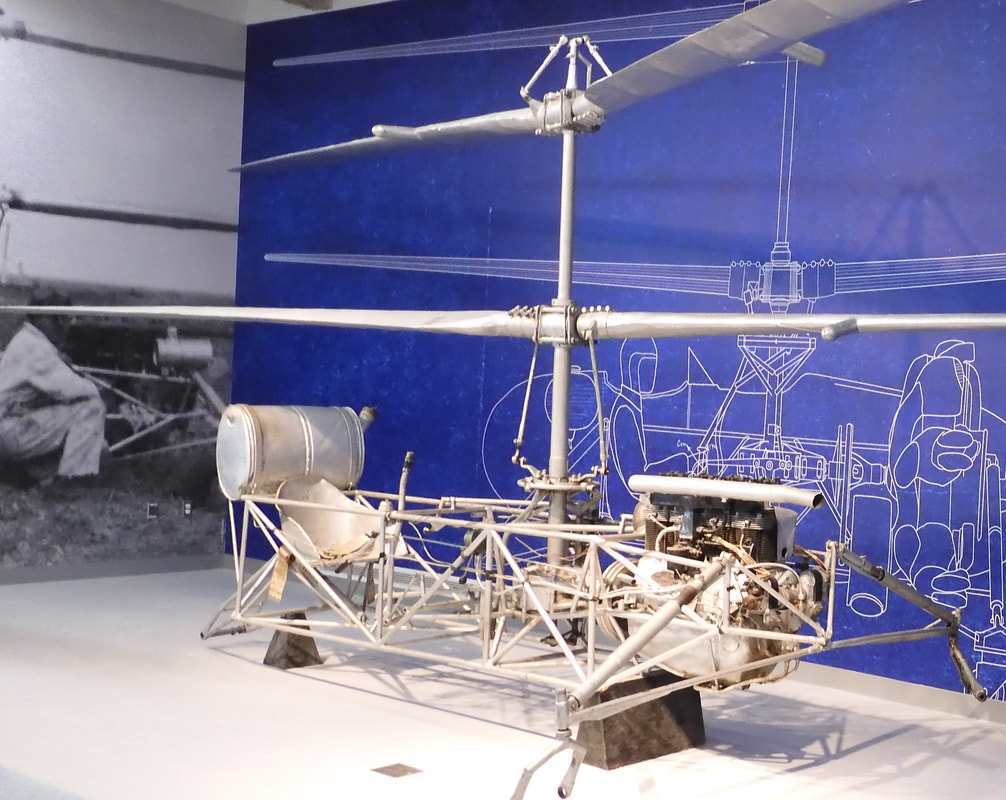 A truly unique piece of the province’s aviation history is the primitive helicopter built by the three Froebe brothers of Homewood, Manitoba. It was the first helicopter to fly in Canada. Built in 1937 and first flown in 1938, the project was abandoned a year later, having reached a height of only one meter! 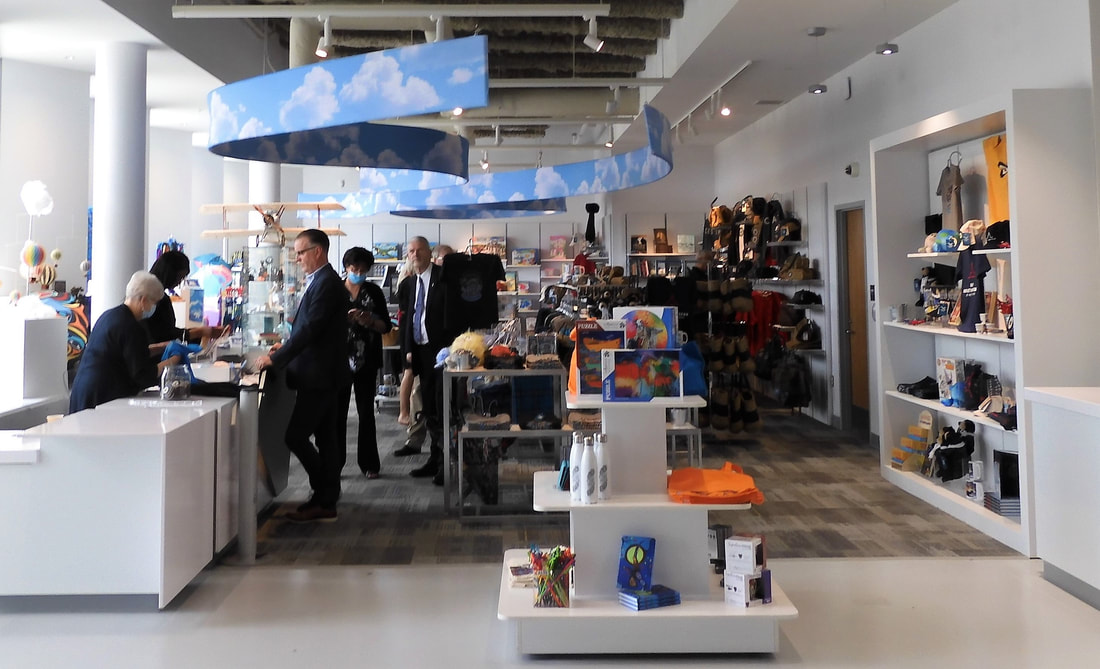 An asset for any aviation museum is a gift shop, and the Landing Zone Boutique at the museum is well stocked with an excellent array of products to tempt the visitor. It proved its worth at the official opening by doing steady business both at the grand opening and then on opening days for the public. 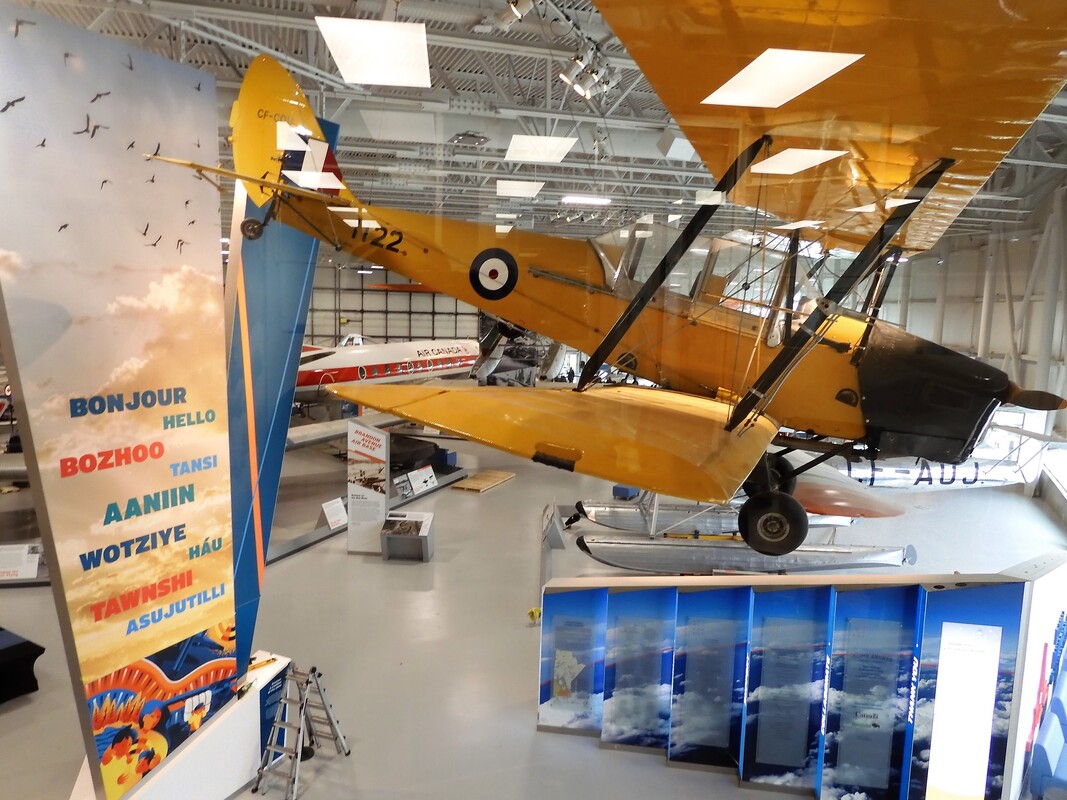 The famous de Havilland Tiger Moth, used as a pilot trainer at Elementary Flying Training Schools of the BCATP, flies above the entrance to the museum. This aircraft appeared in the film, For the Moment, about airmen in the BCATP training in Manitoba, starring Russell Crowe. Visitors are greeted by the sign at left which welcomes visitors in Canada’s two official languages and seven Indigenous languages.
Following the opening ceremonies, guests were served light refreshments as they toured the museum while listening to the music played by the RCAF Command Brass Quintet, based at 17 Wing Canadian Forces Base Winnipeg.
Andrew Smith, the Minister of Sport, Culture and Heritage for the Government of Manitoba, which invested ten million dollars in the museum, described it as “a must-see attraction for generations to come” and recognized the work of staff, builders and volunteers in developing the museum.
His thoughts were shared by Manitoba Lieutenant Governor Janice Filmon in her remarks at the opening ceremonies when she stated that, “This museum will inspire generations of Canadians as they look to the sky in wonder!”
For more information about the Royal Aviation Museum of Western Canada, click here.
Click Here to return to the articles page.