Standing in front of the giant map, I am struck by the reach of the Mackenzie Delta. Flying overhead a few days earlier in an Air North Hawker Siddeley 748, my face all but pressed against the frosted window, I’d studied the expanse of water and earth. The tributaries and lakes, the dead ends where the water is trying to push into new territory; they had all caught my attention as I tried to memorize the topography of a foreign land. On the ground in Inuvik in the Northwest Territories, though, it’s easy enough to forget this place is more water than terra firma – that this town was actually created in the 1950s to relocate the people of flood-prone Aklavik. Staring at the map tacked to the back wall of the Gwich’in Helicopters hangar, I am reminded.

I’m learning more than just the physical geography of the region, however. My new friend and guide, Chris Lennie, stands next to me pointing out the trapper’s cabins, the old Dew Line sites, and other aviation markers. Chris is a young rotary and fixed-wing pilot who’s spent much of the last ten years working summers in and around Inuvik airport, and getting his ratings in Victoria and Toronto. Like about forty per cent of the people in Inuvik, Chris is also Inuvialuit, and as he talks, he points to different spots on the map – Sachs Harbour, Whitefish Station, Herschel Island – telling me the history and importance of these places to the peoples of the Delta. 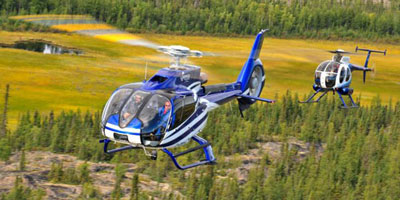 Gwich'in is a subsidiary of Great Slave Helicopters
It’s his day off but he’s happy to show me the Gwich'in Helicopers hangar and the company’s two helicopters . His boss, Chuck Grandy, is also there washing the company pickup between flights. It’s October, so the truck is covered with the evidence of mud season, that two-week mess between summer and winter. Gwich’in mostly runs charter operations for oil and gas companies, Chuck tells me as he wipes down a window. But I’m also told stories of flying people to their trap lines, botulism mercy flights from the coast, and slinging out marooned aircraft.
​
Chasing down aviation history in the north involves as much legwork as deskwork, I’ve discovered. My conversation with Chris and Chuck, for example, took place at the end of my first weekend in Inuvik, a weekend that began with my curling on a team of pilots from Gwich’in and Aklak Air, to getting a look at the aviation photos in The Mad Trapper Pub at midnight, to learning how to drive a skidoo and fire a 12-gauge.

It was also halfway through my three-month term as writer-in-residence at Berton House, author Pierre Berton’s childhood home in Dawson, Yukon. The program is advertised as a writer’s retreat but, as one person remarked, a more apt description in my case would be Berton’s Writer-at-Large Program. While I certainly spent my fair share of time in northern archives and libraries, and came away with some real “nuggets” of aviation history, a lot of the stories came out at the hangar, the coffee shop, and the bar. For this project I’ve had to partially shelve my bookish ways and channel my inner explorer – who I picture to be a cross between Lois Lane and Indiana Jones – except in long johns and a bright blue parka.
Back to the Archived Articles page <