by John Chalmers
CAHS Membership Secretary
Amelia’s fame then soared to greater heights four years later when she became the first woman to fly solo non-stop across the Atlantic, again departing from Harbour Grace. Flying a Lockheed Vega, she lifted off from the airfield there on May 20, 1932, in a feat that took her over 13 hours, landing at Derry in Northern Ireland.

Stories, photos and videos of her abound on the internet. She is commemorated in the 2009 movie, Amelia, starring Hillary Swank. Amelia Earhart – The Final Flight, produced in 1994, featured Diane Keaton in the title role. Amelia Earhart is remembered today at the Harbour Grace airfield with a statue and a bronze plaque. 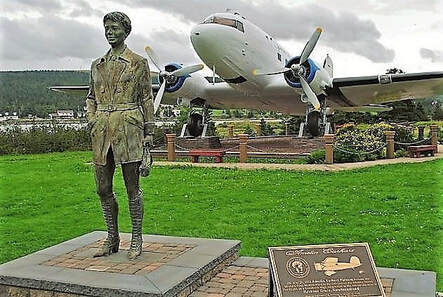 Over 100 years after Amelia worked in Canada as a nursing sister before she became a famous pilot, her name was back in the news in July 2021. Thanks to Canada’s History for providing the cover image and the pdf file of Bill Zuk’s story about Amelia Earhart. For more info about the magazine, or to subscribe to the magazine, click here.
On July 20, 2021, Jeff Bezos, multi-billionaire founder of Amazon.com and Blue Origin space flights, took the pair of Ameila’s goggles that she wore on her 1932 solo trans-Atlantic flight with him on a flight with his own rocket, Blue Shepard. 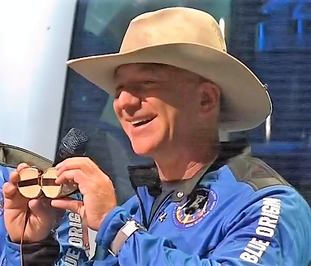 Shown here is Jeff Bezos, with Amelia’s goggles at a post-flight media appearance. His rocket is named for astronaut Alan Shepard, the first American to go into space. The goggles were one of three historic aviation artifacts taken on the 15 minute flight that flew to 62 miles above Earth’s surface. The lenses of Amelia’s goggles were partly covered by tape for the bright day on her flight over the Atlantic. Once on loan to the Smithsonian’s National Air and Space Museum, the goggles were sold at auction in 2009 for $141,600 U.S. to an unidentified bidder. (Screen capture from CNN video)

Besides the goggles, another artifact taken symbolically on the Blue Origin flight was a piece of canvas from the Wright Brothers Wright Flyer, which flew in 1903. The third historic item carried was a bronze medallion of the first recorded hot air balloon flight, made in Paris in 1783.
Amelia Earhart’s lasting contribution to aviation is the Ninety-Nines Inc., an international organization of women pilots that was started by Amelia in 1929, gaining its name from 99 original charter members of the 117 licensed women pilots in the United States at that time. Earhart herself was the 16th licensed woman pilot in the U.S. Nearly a century later, the Ninety-Nines are found in over 40 countries worldwide, including chapters in Canada. Her name lives on, still a part of Canadian aviation history!
A short video of Amelia Earhart's departure on her transatlantic flight has been posted online by the Smithsonian. It can be viewed on our Video Viewport page here.
Click Here to return to the articles page.