With information from Alberta Aviation Museum and photos by John Chalmers
CAHS National Membership Secretary
posted August 2022
The Alberta Aviation Museum in Edmonton, housed in a wartime British Commonwealth Air Training Plan (BCATP) hangar, has occupied the building for the past 31 years. In 2018, the museum, housed in perhaps Canada’s last standing double-wide double-long hangar of the BCATP, signed a 25-year lease with Edmonton City Council. The building, Hangar 14, is itself the largest artifact of the museum. To protect its future, Hangar 14 has been designated as a historic resource by both the city and by the province of Alberta.

The wartime double-wide double-long hangar used as home of the Alberta Aviation Museum has one-quarter of the building used as a multi-function facility for everything from trade shows to Air Cadet parades to funerals, and another quarter of the building as  a shop where many of the museum’s aircraft have been restored.
In spite of that, city administration has recommended to city council that the building be sold so that tax revenues can be generated from the property on which the museum stands. Based on advice from the city’s property management department, city council in July passed a motion to consider selling the building, which could consequently result in the museum needing to relocated.

City Administration’s presentation was framed that they will be “disposing of the asset.” Essentially, this means that they plan to sell Hangar 14 to a private owner.

Aviation enthusiasts have now been asking, “What’s going on with the museum? What’s happening?!” The following is an extract issued by the museum in regard to the position of city administration. 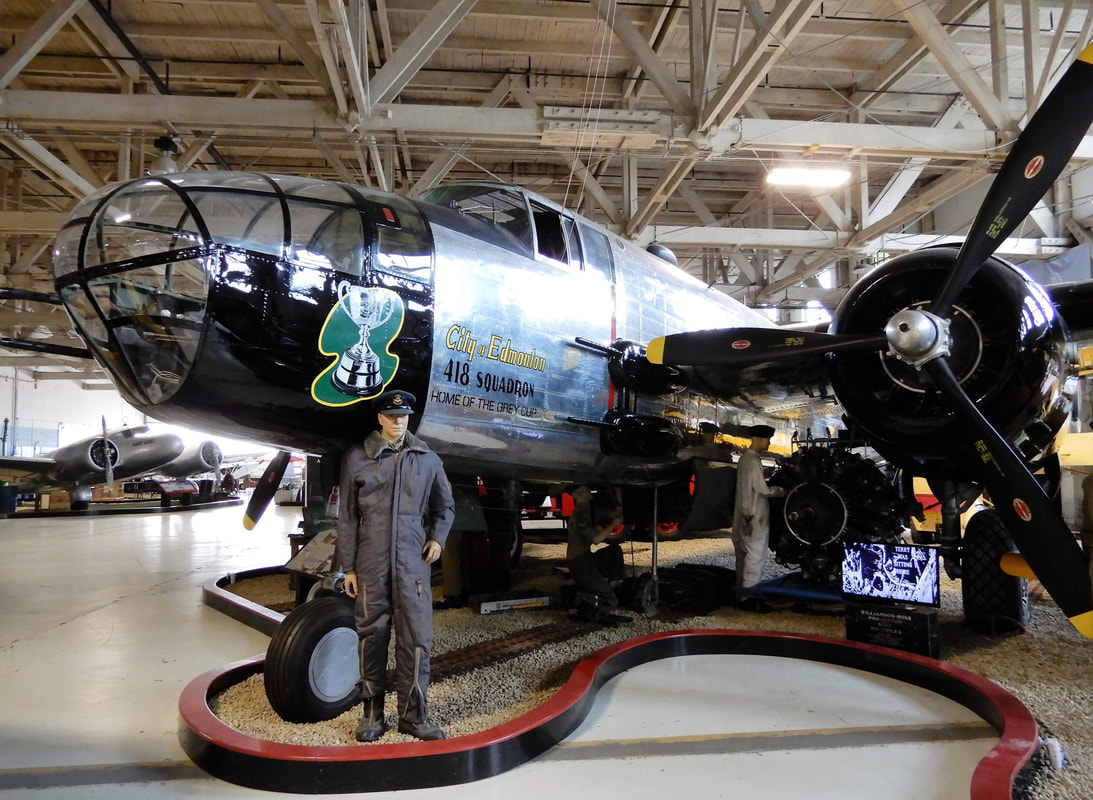 The North American B-25 Mitchell bomber, restored at the Alberta Aviation Museum, is the type flown by No. 418 (City of Edmonton ) Reserve Squadron, RCAF, when the hangar in which the museum is located, served as post-war home to the squadron. The museum is home to over 30 aircraft, all housed in the hangar except six aircraft and a Bomarc missile displayed outside.
Hangar 14 is a protected heritage building both by the city and the province, so the private owner would be required to maintain the building’s historic character, and Hangar 14 would still be legally protected from demolition. The example they used to justify this decision is Hangar 11, which they sold to a private owner, who is planning to fund renovations and turn it into a mixed-use building with retail and some residential spaces. The city is investing $5 million into that project, with the private owner investing $40 million.

The city’s fund for the maintenance of heritage buildings is depleted and they are facing tough decisions in the 2023-2026 capital budget. From City Administration’s point of view, the choice is clear that getting someone else to spend money is preferable to the city spending the money.

City Administration also argued in their presentation that selling Hangar 14 to a private owner is the only way it can be integrated within the Blatchford Development. They also clarified later that part of their decision making is that, by selling it to a private owner, they will then be able to collect property tax on the property, whereas they currently can not as a city asset.

Following their presentation, Alberta Aviation Museum board president Brent Abbott, a retired RCAF Colonel, spoke to council. His presentation highlighted the long history of the Museum – and, importantly, the other member organizations - have had with Hangar 14, and the commitments made by the City of Edmonton in the 2018 lease to maintain the building. He spoke about the work done towards organizational sustainability, and how extremely busy we are with projects, with multiple community partnerships and programs in the works or planned for the near future.

It also highlighted that we are not just a history museum – we’re an active community where a very dedicated group of adults and seniors can gather, work hard, and give back to their community. From an economic point of view, studies show that for every dollar invested in museums, the local community reaps $4 million in benefits, so there are economic benefits to non-profit museums.

A McDonnell CF-101 Voodoo of the Royal Canadian Air Force, one of the military jet aircraft held by the museum, is mounted in flight in front of the museum beside Edmonton’s busy Kingsway Avenue.
Following Brent Abbott’s talk, David Ridley, the Executive Director of the Edmonton Heritage Council presented against the recommendation, and in support of the Alberta Aviation Museum.

A key quote from his presentation is that “We strongly feel the aviation museum in its current location and in Hangar 14 contributes greatly to the importance of heritage experiences as part of belonging and connecting to Edmonton museums.”

His presentation praised the AAM’s work in recent years towards restructuring its organization and its renewed focus on sustainability. Ridley’s final point emphasized the commitment made from the City of Edmonton upon the closure of the airport to the importance of the aviation museum and the relationship between the historic Blatchford Field and the new Blatchford development, and the importance of Edmonton’s aviation history and the role of the aviation museum in sharing that story with the community. (The original Blatchford Field, most recently named as City Centre Airport, was closed by City Council in 2013 for redevelopment, which has been extremely slow over the past 11 years.)

Mayor Sohi emphasized from the start, that, “There’s no doubt that the Aviation Museum is very important to the city. It’s very significant, in every aspect”

The museum’s de Havilland Mosquito is the type flown by RCAF City of Edmonton Squadron during the Second World War. Famed pilot, Russell Bannock, once called “The savior of London,” flew Mosquitos in shooting down V-1 rockets aimed at the city, as well as scoring many victories in defeating enemy aircraft. At one time Bannock served as Commanding Officer of the Squadron during the war.
Several questions by city council dealt with whether or not there has been interest from the community or philanthropists in coming up with innovative, creative partnership opportunities. Since this is such a recent issue that we are only recently dealing with, we do not have anything like that in the works, but will be exploring all options. One example is the Royal Aviation Museum of Western Canada in Winnipeg, which was a $47 million project, funded in part by the Federal government ($11.2 million), the provincial government of Manitoba ($8.8 million), and private donations of $20-some million; a large, LARGE portion of which was the Richardson Foundation (i.e. James A Richardson, founder of Canadian Airways).

Overall, the Councillors present expressed strong support for the value of the Alberta Aviation Museum, but did emphasize the difficulties faced by the City, financially.

We are making the case that staying in Hangar 14 is the best solution – for us, for the City, and for the Blatchford development. But, realistically, we (the AAM) need to look at all options possible, such as alternate existing locations that could host the Aviation Museum (Hangar 39?), alternate locations where a new building could be constructed (hopefully here at Blatchford), and possible partnerships with the Provincial Government, Ministry of Culture, and Federal Government.

We have supportive City Councillors – they are wanting to help and support us, and we have strong support from the Edmonton Heritage Council. No actual decision has been made yet regarding the future of Hangar 14, but we encourage letters of support for the Aviation Museum to city council, MLAs and MPs, emphasizing our value to society, value to the city, importance in your lives.

We want to make sure that the City knows how much heart and soul has been invested into building an amazing aviation museum – not for us individually, not for our organization – but for the City of Edmonton and our community. We are committed to finding a solution.

Edmonton mayor Amarjeet Sohi can be reached here.
Click Here to return to the articles page.