By John Chalmers, CAHS Membership Secretary
The building that is home to the museum is owned by the City of Edmonton and is the last existing double-wide, double-long hangar built for the BCATP. It houses over 30 aircraft and accommodates a large restoration shop where many of the aircraft in the collection have been restored or built. The current project is restoration of a Bell P-39 Airacobra, a fighter type that passed through Edmonton from the United States during the war en route to Russia in the U.S. Lend-Lease Program.
Each aircraft of the museum, which is a Museum Member of the CAHS, appears in the book with a description and details. As well, stories of 17 individuals are carried in the book about men and women who are important figures in Edmonton’s aviation history. They include Edmonton-born Russell Bannock, a decorated Mosquito pilot of the Second World War who served as commanding officer of No. 418 (City of Edmonton) Squadron, RCAF, and later as president of de Havilland Canada.

Edmonton-born Max Ward is also featured, a man who started in the aviation business as a bush pilot and ultimately built an airline, Wardair, known for its high-quality service on international flights. Max, Russell Bannock and six others in the book are Members of Canada’s Aviation Hall of Fame.

Margaret Littlewood was hired by famed aviator Wop May to serve as a Link Trainer instructor for No. 2 Air Observer School when it was located in the hangar during the war and Wop was manager of the school.
​
American aviatrix Katherine Stinson flew the first airmail in western Canada, from Calgary to Edmonton on July 9, 1918, in her custom-built Curtiss Special biplane. An  exact replica of her one-of-kind aircraft was built by museum volunteers in a project taking over 20,000 hours, and is prominently displayed near the museum’s entrance.

During the war, the famed Avro Anson flew from No. 2 Air Observer School, located in the hangar that is now home to the museum, in training navigators as well as pilots on multi-engine aircraft. A story and a photo portray each of the museum’s aircraft in the book.
Brent Abbott, chairman of the museum’s board, served also as chairman of the ad hoc committee that produced the book. “I was aware of some of the dynamic and adventurous people involved with aviation in Edmonton and Alberta,” he says, “and it was apparent that we had capable and talented individuals who could put together a book that would tell the stories of both people and our aircraft.”
​
Topics in the book include thematic presentation of  Early Aviation, The Roaring Twenties, Bush Flying, the Second World War, the Cold War and Contemporary Civil Aviation. Stories and photos are presented of individuals and aircraft involved in all those chapters of Canadian aviation.

Two important figures in Edmonton aviation are portrayed in this two-page spread. Tommy Fox served with the RAF during the war and later built Associated Airways and Associated Helicopters in Edmonton, serving northern Canada and the DEW Line. After serving with the RCAF during the war, Don Hamilton flew as a northern bush pilot then established Hamilton Aviation in Edmonton and built Air Spray Ltd. into one of Canada’s biggest aerial fire fighting fleets.
Over the past year, the committee of three employees and six volunteers researched and wrote the book and shot new photographs, The result is a publication of 100 pages that serves as far more than just a souvenir of the museum. It is a valuable information and reference resource for visitors. There is no doubt that it will serve the many teachers and students who visit the museum each year to learn about how an airplane flies and how aviation, aircraft and people contribute to Canada’s history and heritage. The photo montages on the covers and inside pages comprise a visual cross-section of Canadian civilian and military history. 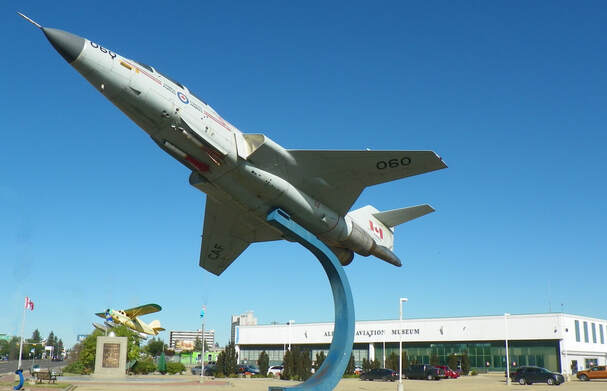 A McDonnell CF-101 Voodoo of the RCAF, and in the background a Noorduyn Norseman, are mounted outside the Alberta Aviation Museum located on Kingsway (named for a Royal Visit in 1939) in Edmonton. The museum is adjacent to the site of the former airport that was one of the country’s busiest during the war with training and military aircraft passing through the city. In the new book, all aircraft in the collection are commemorated and introduced to readers in a keepsake publication.
​ (Chalmers photo)
Click Here to return to the articles page.