A Canadian-built Hawker Hurricane fighter aircraft, a type that excelled in the Battle of Britain, but never had to face combat as all its service was in Canada, has been restored to like-new condition and placed in its new home, the Hangar Flight Museum of Calgary, adjacent to the Calgary International Airport. The aircraft was rescued and restored through the efforts of the Calgary Mosquito Society under the leadership of president Richard de Boer.


Fund raising by the Mosquito Society, and with financial support from the City of Calgary, both the Hurricane and a de Havilland Mosquito fighter bomber have been assured of a solid future. The Mosquito is now under restoration at the Bomber Command Museum of Canada in Nanton, Alberta, where work is continuous in the capable hands of volunteer craftsmen of the Calgary Mosquito Society. 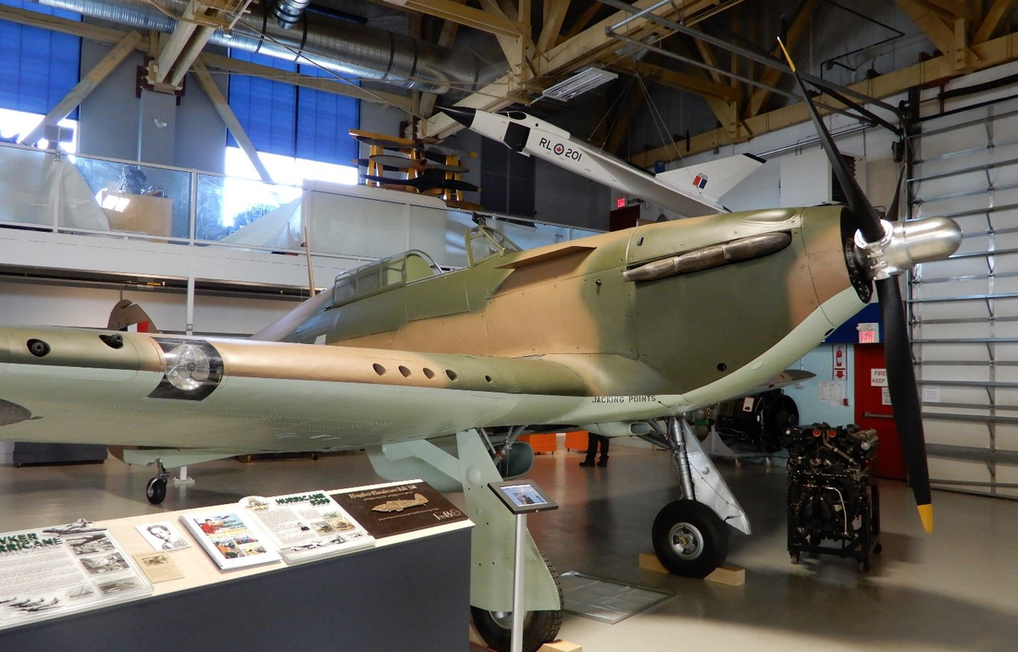 Looking like new, with a rebuilt Merlin engine scheduled to be run in the future, Hurricane 5389 stands proudly at the Hangar Flight Museum. Signage accompanying the aircraft pays tribute to Canadian Elsie MacGill (1905-1980). At the University of Michigan in 1929, she was the first woman to earn a master’s degree in aeronautical engineering. In 1939, at the plant of Canadian Car and Foundry at Fort William (now Thunder Bay) she was put in charge of engineering for production of the British-designed Hawker Hurricane. She saw 1,450 Hurricanes produced there in two years, including Hurricane 5389. The recipient of many awards, including installation to the Order of Canada, Elsie was inducted as a Member of Canada’s Aviation Hall of Fame posthumously in 1984. 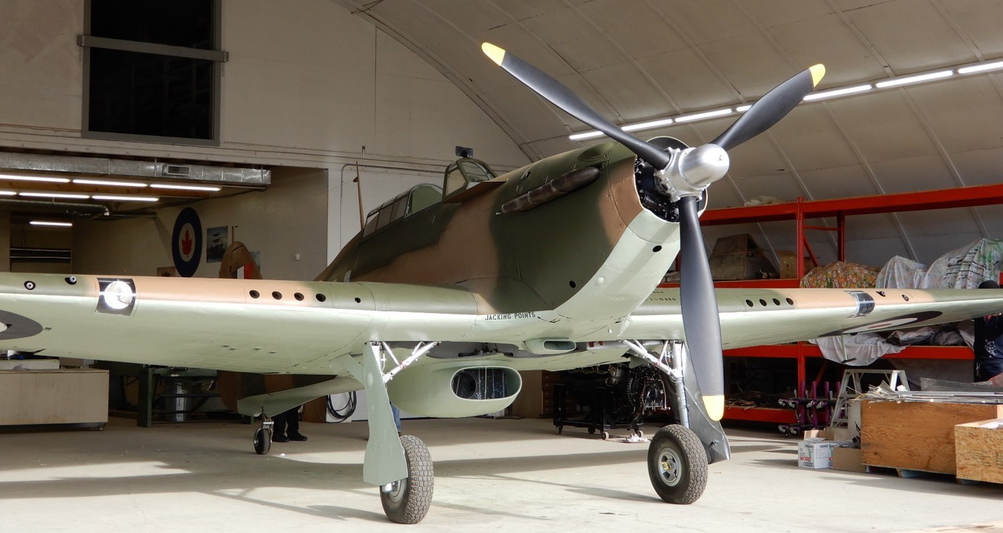 Ready for a sneak preview rollout from the shop at Wetaskiwin on October 19, Hurricane 5389 greets the sunlight after undergoing a complete restoration that took seven years. “We subcontracted the restoration of the Hurricane airframe to Historic Aviation Services in Wetaskiwin, Alberta, but were responsible to the City of Calgary for the project and were heavily involved with the Hurricane throughout the whole seven-year process.  We had to find vendors for the propeller, instruments, radiator and we overhauled the engine ourselves at Nanton,” says Richard de Boer. 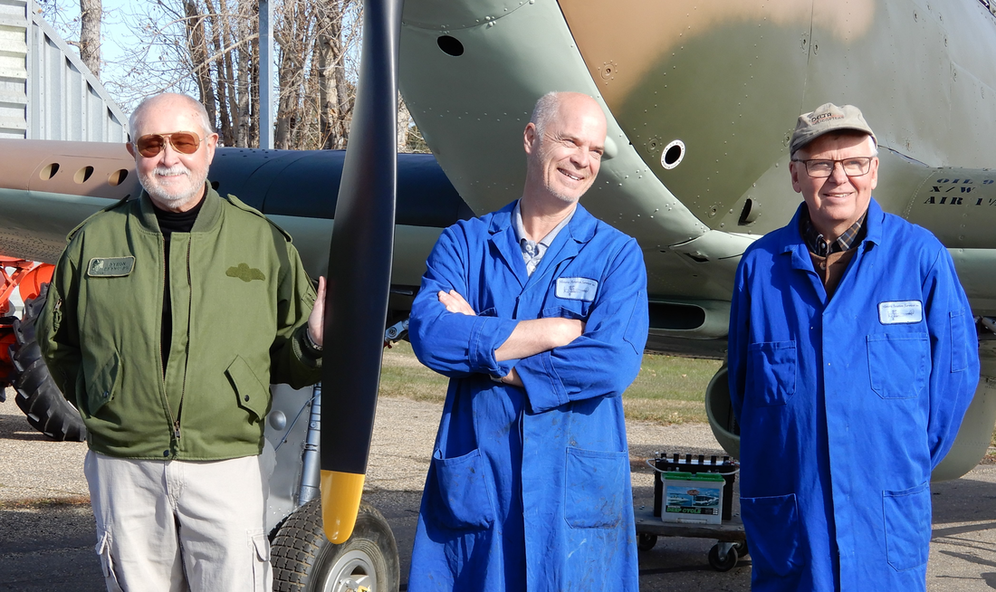 At left is Byron Reynolds, proprietor of Historic Aviation Services Inc. in Wetaskiwin, where the Hurricane was restored. Along with Greg Davis, centre, and “Buck” Hills, they have plenty to smile about following their work in completion of the Hurricane, a $700,000 project. ​ 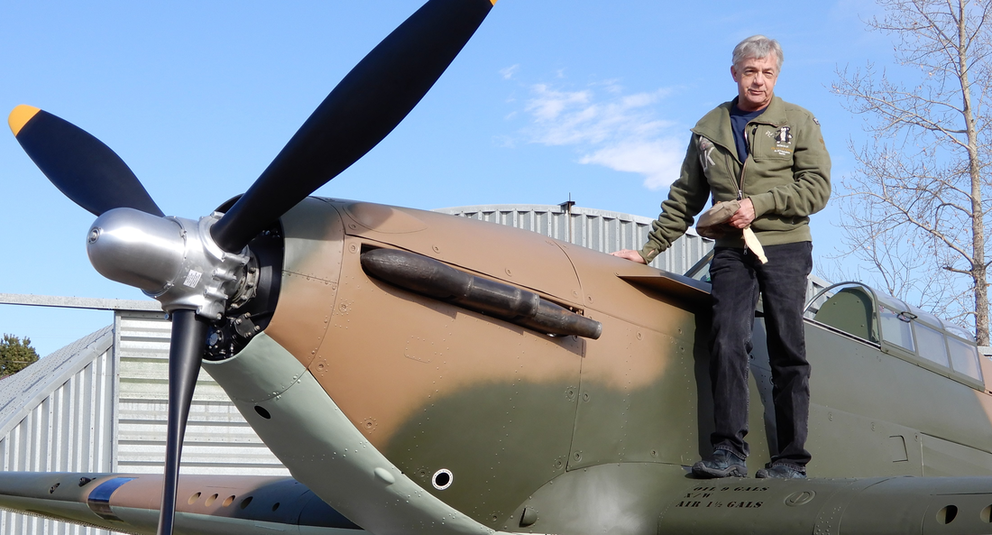 Several members of the Calgary Mosquito Society arrived to welcome the aircraft at its rollout on October 19. Richard de Boer, president of the Society and president of the Calgary chapter of the CAHS, spoke to all attending about the history of the aircraft when it was rolled out on October 19 to mark completion of its restoration. The occasion was seven years to the day from when the Society acquired control of the aircraft for restoration. The cost was shared equally with funds raised by the Mosquito Society and funding from the City of Calgary.

On October 19 at the preview rollout, Hurricane 5389, at left, was welcomed to the tarmac at the Wetaskiwin airport by Hurricane 5418 from the Reynolds-Alberta Museum. The aircraft comprise two of only four restored Hurricanes in Canada. 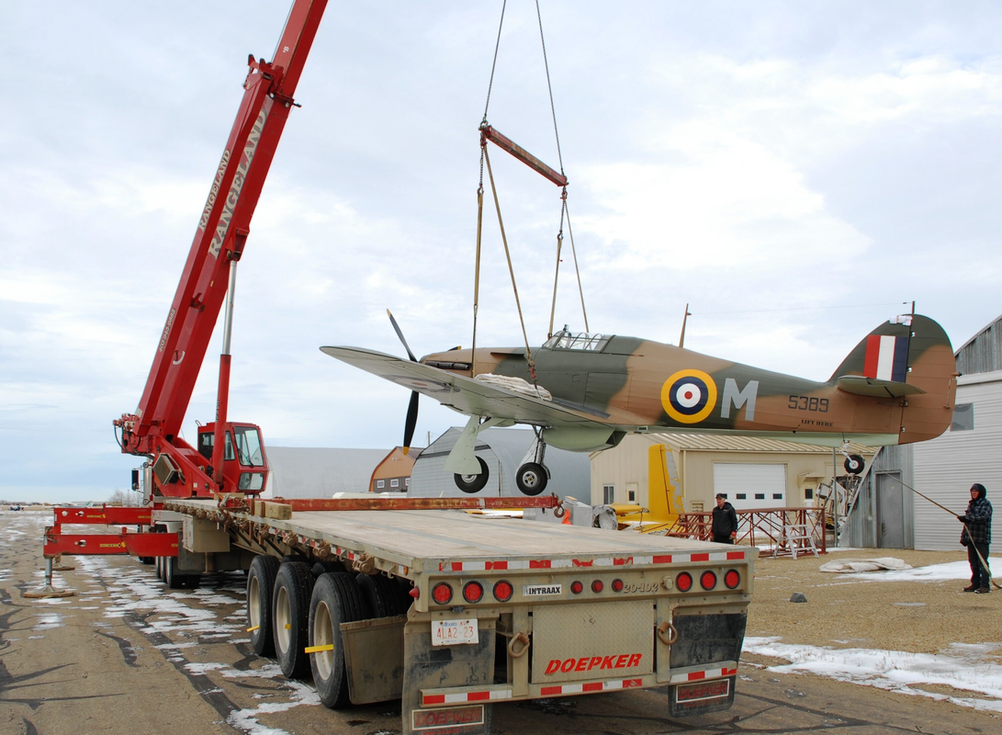 The process to move the Hurricane began during the noon hour on October 29, 2019. The aircraft was loaded by the crane of a picker truck from Rangeland Truck and Crane of Airdrie, Alberta, provided by owner/operator Daryl Medd, who donated his services and the use of three pilot vehicles to accompany the Hurricane on the journey to its new home. (Richard de Boer photo)


The process to move the Hurricane began during the noon hour on October 29, 2019 when the aircraft was moved out of the shop and loaded by the crane of a picker truck. The huge truck from Rangeland Truck and Crane of Airdrie, Alberta was provided by owner/operator Daryl Medd, who donated his services and the use of three pilot vehicles to move the Hurricane to its new home. (Richard de Boer photo) 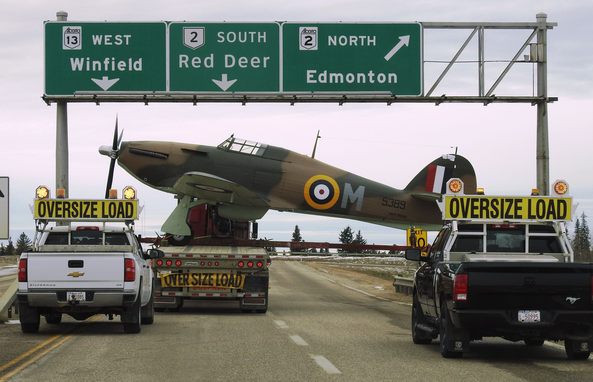 Averaging 80 km per hour, the truck was required to pull off Highway 2 at Airdrie, just north of Calgary from 4:30 p.m. until 11 p.m. to allow regular traffic to proceed unimpeded to Calgary. Mounted sideways, the Hurricane’s main weight was on the truck’s flatbed, with a support holding up the tail end, and the operation occupied two lanes for the 250 km trip from Wetaskiwin to Calgary. The aircraft was offloaded and placed in the museum by 2:00 a.m. (Richard de Boer photo) 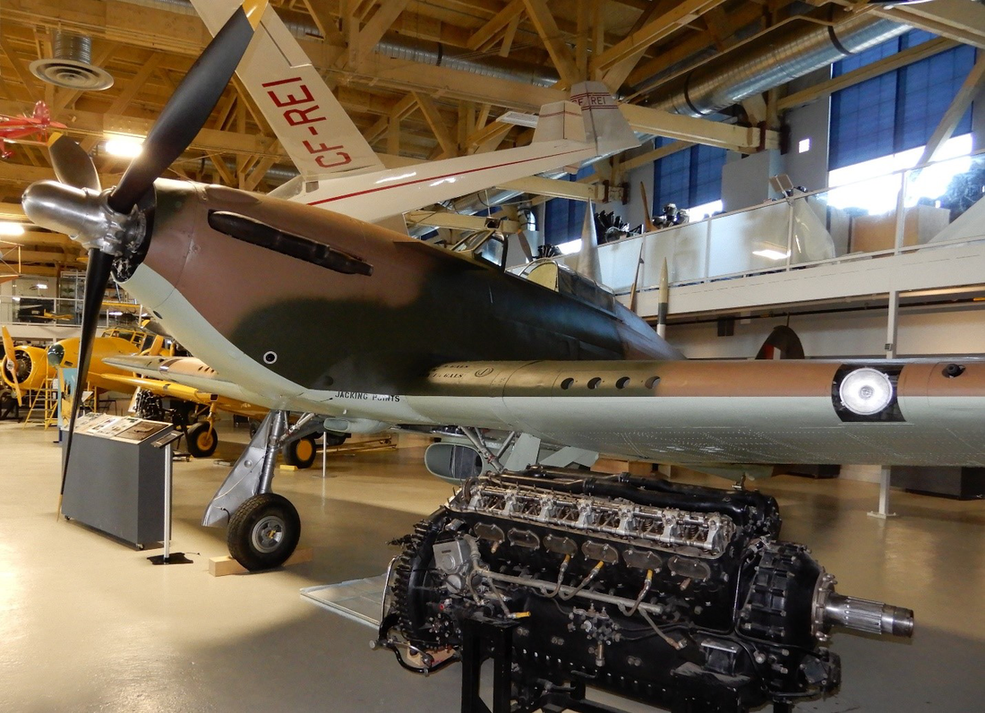 Displayed with the Hurricane is a Rolls-Royce V-12 liquid cooled engine, the type used to power both Hurricanes and Mosquitos, as well as other types of aircraft during the war, including Spitfires and Lancasters. At the public introduction of the aircraft in ceremonies held at the Hangar Flight Museum on November 6, Richard de Boer stated in his remarks that, “As much as the airplane is owned by the City and hence the citizens of Calgary, in an important way it does not belong to us. We are but temporary custodians of the Hurricane and the most recent links in a chain that stretches back 80 years and more to when the first Canadian-built Hurricanes rolled off the assembly line at Canadian Car and Foundry.  This airplane belongs as much and perhaps even more to those unmet and those not yet born. As magnificent as the Hurricane is, let us remember that it is a machine designed to kill. As much as it is a war machine, I hope that one of the messages it carries into the future is the fervent hope of soldiers around the world and back through time:  ‘Never again.’ "

For more information on The Calgary Mosquito Society, the Hurricane and the Mosquito under restoration, click here.

For a pair of related, must-see videos on the subject, click here to go to our Video Viewport. The first one is of the completion ceremony when the Hurricane was unveiled on November 6, with speakers Brian Desjardins, Calgary mayor Naheed Nenshi, pilot Gordon Hill and Richard de Boer. And the second video features comments by Byron Reynolds, by Gordon Hill in flying the aircraft, history of the Mosquito Society and footage of the restoration process.
Return to the Historical Articles main page <